While planning the invasion of the Continent it was realized that as soon as we were established on the far shore railway communications behind our lines would be of major importance and that locomotives and rolling stock captured would be in no condition to satisfy our needs. Thus a large programme was arranged for the manufacture of additional supplies of locomotives, wagons, ambulance trains and railway mobile workshops. Over 1,000 locomotives were specially built in Britain alone.

It devolved on the Transportation Service, War Office, to arrange for suitable vessels for shipping locomotives and rolling stock from the United Kingdom to France. For since 1940 all existing train ferry vessels had been converted to other uses and plans had to be made for their return to normal use.

The main factors governing the re-establishment of the pre-war train ferry service were, first that we could not expect to find the original terminal works on the French side left intact by the enemy, and second, that the location of the French and Home Terminals did not suit invasion plans. It was decided, therefore, to equip the ships with special gear so that locomotives and rolling stock could be quickly linked up with any nearby railway system.

Designs for special gantry cranes, to handle locomotives and other heavy lifts up to 84 tons for the Southern Railway's Twickenham Ferry class steamers and for special loading ramps for the ex-L.N.E.R. Vessels, were put in hand in late 1942, the fabrication of the structural steelwork and crane machinery proceeding during 1943. It is of interest that the ships could not be fitted out with their new gear as it became ready, but had to remain in service until the last moment on urgent operational work.

But these ferries were not enough, and it was decided to convert British and American L.S.T.s (landing ships, tank), so as to carry railway wagons or tanks. The work on the former was done by Naval Dockyard personnel and on the latter by U.S. technicians. The scheme was successful and some 50 craft were fitted out; these in due course transported upwards of 30,000 wagons and coaches to the Continent.

Concurrent with the need for modifying the ferry vessels was the necessity for new terminal facilities to be built at suitable locations on the South Coast which would not interfere with other shipping facilities. The War Office carried out the necessary reconnaissances and prepared designs for three sites. Construction work on these terminals was carried out by Port Construction and Repair Companies R.E., supplemented by Pioneer Corps Troops and Railway Construction Troops as needed.

Terminal arrangements required for the L.S.T.s were simple. It was only necessary to lay rails into the hards which had been constructed for the loading of tanks, and connect to new holding sidings for the wagons, and provide rail-mounted ramps to run up and down the hards with the tides. In the case of the far shore terminals nothing much could be done on the planning side, but the experience gained in this country enabled certain basic requirements to be determined which greatly expedited work when it came to be done at Cherbourg and elsewhere. Cherbourg was captured on June 26, 1944, and on July 29 the Twickenham Ferry delivered her first cargo of locomotives. As the tide of war swept eastwards, further terminals were successfully developed at Dieppe and Calais. 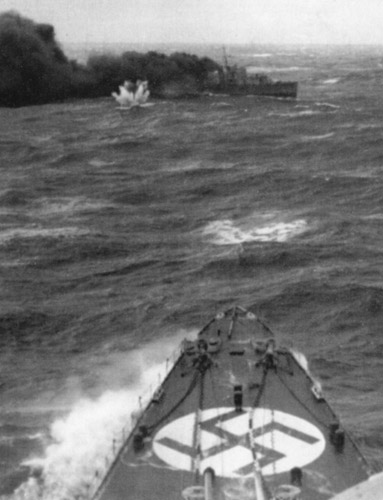 Now It Can Be Told! - How Royal Marines Hacked a Base From Jungle

The dramatic story of another secret war port was revealed by the Admiralty in July 1945. It is the story of "Port T"  a naval base with full defences  hacked out of the jungle on Addu Atoll, a coll