Now It Can Be Told! - Daring Exploits of Midget Submarine X.24

How a British midget submarine twice penetrated the Norwegian harbour of Bergen  one of the most heavily defended ports under German control  and sank a 7,500-tons merchant ship, a floating dock and a smaller merchant vessel, besides damaging harbour installations, is a story delayed in the telling since April 1944. The craft which carried out these daring and hazardous missions was the X.24, a 4-man submarine carrying detachable explosive charges, and similar in type to the X-craft which damaged the Tirpitz in Alten Fjord in September 1943.

On April 10, 1944, H.M. Submarine X.24, with Lieut. M.H. Shean, R.A.N.V.R., in command, got into Bergen Harbour and laid a charge under the 7,500-ton merchant vessel Barenfels, which was berthed at a coaling jetty. The explosion sank the ship and caused considerable damage to harbour installations. The X.24 then withdrew from the harbour without being detected, and returned home safely. The Commander-in-Chief, Home Fleet, described the operation as a magnificent achievement, ably planned and most daringly carried out. Lieut. M. H. Shean, R.A.N.V.R., was awarded the D.S.O. for this exploit.

On September 11, 1944, the same submarine  the X.24  commanded by Lieut. H. P. Westmacott, D.S.C., R.N., of Bembridge, Isle of Wight, sank a floating dock in Bergen Harbour. Having made a passage of 80 hours in extremely bad weather across open sea, the X.24 passed through 30 miles of island passages off the Norwegian coast and negotiated minefields and other defences of Bergen Harbour, to attack a target which was of particular value to the enemy at that time, namely, the floating dock.

The craft was manoeuvred in daylight at periscope depth, among many boats and ferries, and at one time a ship was heard to pass immediately over the submarine when she was at a depth of 35 feet. During the approach to the target, Lieut. Westmacott was able to read, through the periscope, the wreck warning notice attached to the mainmast of the Barenfels which had been sunk five months previously. Charges were released under the floating dock, which was destroyed, as was a small merchant vessel alongside it. The X.24 then withdrew and made her way through the fjords undetected to open sea. Lieut. Westmacott was awarded the D.S.O. for great gallantry in a most hazardous operation.

X-craft were also used as defence markers during the Allied landings in Northern France. They were actually the first vessels of the Royal Navy off the French shore, and they lay submerged for 48 hours before the first landing craft approached the coast.

Built Fifty Miles from the Sea

During the war midget submarines were built for the Admiralty, in conditions of great secrecy, by three inland firms  at Chesterfield, at Gainsborough, and at Huddersfield. In the latter town, of some 120,000 people, though hundreds of workers knew something of what was going on, those really in the know could be counted on the fingers of both hands. From the Huddersfield engineering works of Messrs. T. Broadbent and Sons, Ltd., a 50-miles journey to the sea faced the completed submarines, which were accompanied by their crews.

These lived in the town with their craft during the later stages of construction, and in the quiet of an early Sunday morning, before townsfolk were up and about, the journey of each completed vessel would commence. In the guise of motor-boats, the midget submarines were conveyed along the streets to the railway station, where special trains waited to take them to the Clyde and so down to the sea. Two girl employees of the Huddersfield firm had the honour of launching and naming the craft.

The Navy's midget submarine which crippled the Tirpitz first emerged as a small wax model at the Admiralty Experimental Works at Haslar, near Portsmouth, over five years ago. Several designs and modifications were tested and improved for speed, endurance, diving and sea-keeping before the prototype was built. And there also the first full-scale midget was tested in an experimental tank, by a naval crew, before sea trials were embarked upon; then came the specialized training and preparations for action. Here also the piloted torpedoes which the enemy had used were reconstructed as an accurate model, from captured fragments, and much useful information was thereby gained.

Now It Can Be Told! - Naval Commandos Sank Ships at Singapore 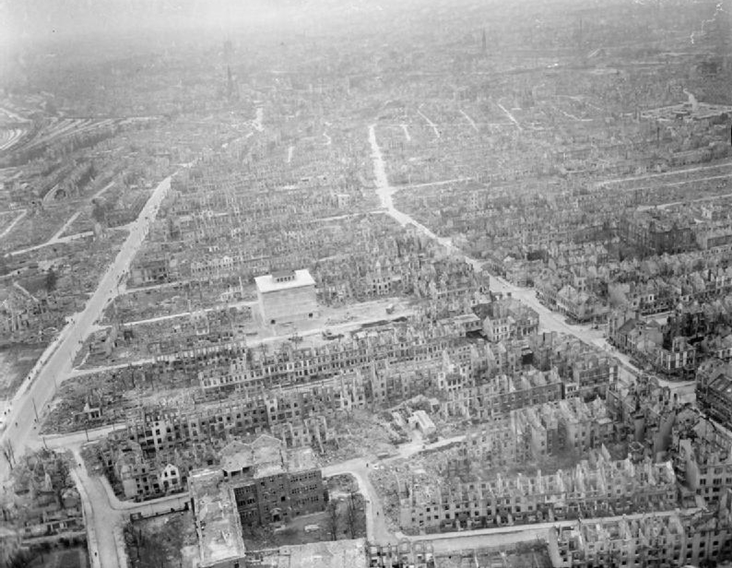 Germany's second largest port, Bremen was a prime target for attacks by the R.A.F. from May 1940 to April 22, 1945 - five days before its capture by the British 2nd Army. Onslaughts included one of

I Was There! - Sea-Bed Grave for Hitler's Poison Gas

Concentrated in a big forest covering an area of four square miles is one of the greatest stocks of poison gas in Germany, wrote a Daily Telegraph special Correspondent with 21st Army Group on August