How the Barham was Lost

It is practically four years since the battleship Barham was lost, yet a full official account of the disaster has still to appear. In the Admiralty account of naval operations from April 1941 to January 1943, entitled The Mediterranean Fleet, there is no more than a bare reference to "the loss of the battleship Barham, torpedoed by a U-boat on the 25th November."

Named after the Admiral who was First Lord in the year of Trafalgar, H.M.S. Barham was launched from the yard of John Brown & Co., Ltd., at Clydebank, on the last day of 1914. At the Battle of Jutland she wore the flag of Rear-Admiral Hugh Evan-Thomas, commanding the Fifth Battle Squadron, and suffered casualties amouting to 26 killed and 37 wounded.

From 1919 to 1924 she was flagship of the First Battle Squadron in the Atlantic Fleet, and was then ordered to the Mediterranean. Returning to England in 1927, she rejoined the Mediterranean Fleet a year later. In 1929 she went back to the Atlantic Fleet, from which she was paid off at Portsmouth in December 1930. During the ensuing 2½ years she underwent an extensive refit which considerably altered her appeareance. Her original two funnels were replaced by a single massive uptake, but she was never completely rebuilt and modernized, as in the case of three of her sister ships, the Queen Elizabeth, Valiant and Warspite.

After a couple of years in the Home Fleet the Barham was again sent to the Mediterranean in 1935. Save for two brief interludes in home waters, she continued to serve on that station until the date of her loss. In the victory of Matapan, on March 28, 1941, she played an important part (see illus. page 682, Vol. 6). A ship of 31,000 tons displacement, she was armed with eight 15-in., twelve 6-in. and eight 4-in. guns. Her original speed of 25 knots had been considerably reduced by the additional weights added in the course of 27 years, but she remained a formidable fighting unit, whose loss could ill be spared on the eve of Pearl Harbour.

On November 25, 1941, British light forces had just intercepted an Italian convoy on its passage across the Ionian Sea, bound for Libya. In case the enemy fleet might come out, the Commander-in-Chief, Admiral Sir, Andrew Cunningham, deemed it wise to have his battleships at hand to support the cruisers and destroyers. Thus the Queen Elizabeth (flagship of the Commander-in-Chief), Barham (flagship of the Second-in-Command, Vice-Admiral Pridham-Wippell), and Valiant were proceeding at 18 knots through the area between Crete and Cyrenaica, with a few destroyers acting as a screen.

Unfortunately, a skilful U-boat captain contrived to dive beneath the screen unobserved and fire a salve of torpedoes at the three battleships. According to some accounts these were aimed at the Queen Elizabeth, which was narrowly missed. Three are believed to have hit the Barham simultaneously from a distance of a few hundred yards, producing an explosion so violant as to force the submarine momentarily to the surface. She passed quite close to the Valiant, which hoisted the signal "Submarine astern", but the smoke from the explosion prevented the flags being seen by any but a few.

Within four minutes the Barham sank after a second explosion, that of the after magazine. How many were on board her at the time is not precisely stated, but 859 lost their lives. Others were picked up by the destroyers nearest to the scene of the disaster. A graphic account of the rescue work is given by Lieutenant-Commander Hugh Hodgkinson, D.S.C., R.N., in his book, "Before the Tide Turned", published by Messrs. Harrap (and quoted here by kind permission of the publishers). H.M.S. Hotspur, the destroyer of which he was first-lieutenant, was the closest, so was directed to proceed to the aid of survivors;

"Already the crew were cutting the stowage lines of the rescue nets. All rafts were being man-handled to the side. The whaler was manned, and I sent down the young midshipman to cox her. The Captain had slowed down, and we were nosing into what looked like a London fog, and smelled worse. We passed into and through the thick fog, which had by now drifted to leeward, and suddely it cleared. Dozens of heads bobbed in the water, far more than I had ever hoped for."

"The Captain steered for a large clump who were clinging to the Barham's mast. I shouted final instructions to the midshipman: 'Go for the far and solitary ones, or those in distress. Leave the rest for us.' Then I lowered the whaler to the waterline and slipped her."

"As soon as we stopped the little bobbing heads moved slowly in towards us and the men were heaved on board. At the same time all our Carley rafts were slipped, and tow men from our own crew dived over the side and clambered on board each of the rafts to paddle them out to more distant groups. Each raft had a grass line paid out behind it, so that as soon as it was full we could heave it back at high speed to the ship."

"Each man as he came over the side was black with oil. Bales of cotton waste were brought up from the store to clean them. The whole upper deck became layered with oil, so that one could hardly stand. The sick bay was filled with oil-smeared wounded. The whaler came alongside with men too badly wounded to climb. Neil Robertson stretchers were lowered and the men hoisted out, groaning, by tackles slung over the torpedo davit."

Admiral Holding on to Raft too Thickly Oil-Covered to Recognize "The Captain, meanwhile, moved the ship slowly towards the group clinging to the mast. Here the oil was thickest. It was solid, and the men could hardly swim or even cling to the great spar. It touched alongside, just by our foremost net, and men started clambering up limply."

"There was a Carley raft there, too, from which men were climbing. One seemed to be in charge, and was exhorting each to make his utmost effort. He was too thickly covered with oil to recognize, and he was swimming by the raft and holding on, to give the weaker ones a chance to lie in the raft. When all were up he started too. He put up an arm to a helping hand. It seemed to be nothing but gold stripe, and I realized who it was. I never expected to receive an admiral on board in such circumstances."

It was, in fact, the Second-in-Command of the Mediterranean Fleet, now Admiral Sir Henry Pridham-Wippell. He has recently been appointed Commander-in-Chief, Plymouth, as from November 27, 1945  almost four years to the day since he was rescued in the way just described.

Within a fortnight of the loss of the Barham, the battleship Prince of Wales and the battle cruiser Repulse were both sunk by Japanese torpedo planes in the South China Sea; and a little later the Queen Elisabeth and Valiant were disabled by a daring Italian penetration of Alexandria Harbour in a tiny craft carrying two men. Although so slender a margin of naval strength was left to us in the Mediterranean, the Italians showed no disposition to send their main fleet out to seize control of that sea. Instead, they redoubled their efforts to bomb and starve Malta into subjection; and Rommel's armies threatened to invade the Nile valley. Tobruk fell in June 1942, but the tide turned at El Alamein in October.

Our only battleship to be sunk at sea by a U-boat during the war was the 31,000-ton H.M.S. Barham, intercepted by the U-331 while operating with the Mediterranean Fleet some 200 miles W.N.W. Of Alexandria on November 25, 1941. Hit by a salvo of torpedoes, she took a heavy list to port. Within four minutes of being struck, between the funnel and the after turrets, the after magazine blew up in a thick poll of smoke, causing the deaths of 859 officers and men. Photos, British Official. 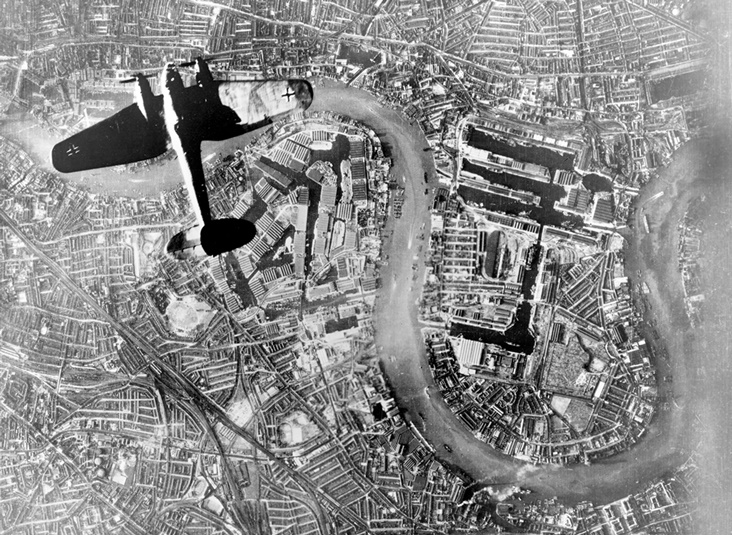 One of our most astonishing and successful feats in the countering of the Nazis when Britian had her back to the wall was the partial removal, in the autumn of 1940, of the Port of London to the Clyde