In the last Great War the Dominions contributed to Britain's Air Force large number of skilled and courageous pilots and crews. Again today the whole strength of the Empire in the air is being marshalled, and there is no doubt that the effort of 25 years ago will be largely exceeded in the present conflict.

Even before war broke out the Dominions hastened to offer Britain all assistance in their power, and as soon as the struggle began efforts were made to tap the vast resources, human and material, of the nations of the Commonwealth. Particularly was the help of the Dominions sought and received in the matter of air defence.

"Already", said Sir Kingsley Wood, Minister for Air, in the House of Commons on October 10, "the Dominions have signified their intention of making a great and powerful contribution to the common cause in relation to air defence". Sir Kingsley went on to say that the Government had put forward for consideration of the Governments in Canada, Australia and New Zealand an outline of arrangements for the rapid expansion of the air forces of the respective countries, and the Dominions had signified their ready acceptance of the proposals.

Training schools, he proceeded, would be established and maintained in each of these Dominions, but the more comprehensive and technical facilities required for advanced training, apart from those available in Great Britain, would in the main be concentrated in Canada. To the Canadian centres would proceed personnel from the more elementary schools in Australia and New Zealand and also in this country; there they would receive, with similar personnel from Canadian schools, the advanced training designed to fit them for all service in the line.

To facilitate this large concentration of advanced air training in Canada, a technical mission headed by Lord Riverdale  better known, perhaps, as Sir Arthur Balfour, the great steel magnate  has been sent to Canada to consult there with corresponding missions from Australia and New Zealand. For various reasons the Government of the Union of South Africa prefers to train her air force personnel at home. "But", commented Sir Kingsley Wood, "the Union authorities intend to make their training as complete as possible, and to expand their air force to the fullest extent of their resources".

Meanwhile in Australia the work of aircraft production has forged ahead. "The Commonwealth aircraft factory", said Mr. R. G. Casey, the Minister of Supply, in a broadcast delivered on October 16, "is now turning out enough 'planes to rearm a squadron every three weeks". Mr. Casey went on to say that the Australian Government planned to construct aircraft on a large scale so that Australia could supply the other Dominions as well as herself. Taken in conjunction with the fact that Australia was now making her own artillery, machine-guns, armoured cars, and every type of shells and bombs, it would be seen that the Commonwealth was rapidly becoming an Empire arsenal.

Well might Sir Kingsley Wood, in concluding his speech in the House of Commons, pay a tribute to the vision and imagination of the Dominion statesmen who are responsible for these striking developments in Empire policy. 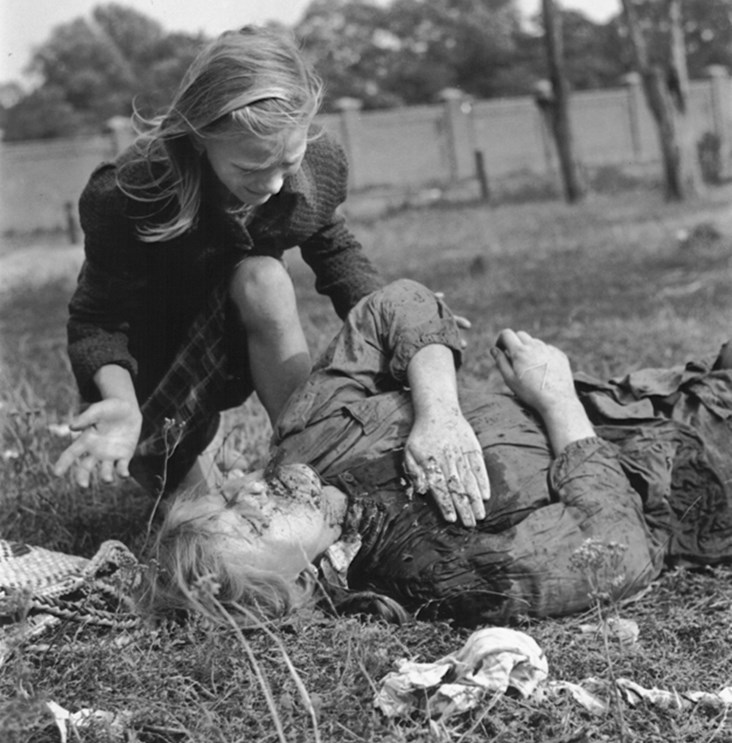 A Permanent Picture Record of the Second Great War

In the course of his speech to the Reichstag on September 1, 1939, Hitler declared, "I will not make war on women and children". This photograph taken in a field near Warsaw shows that his words wer

The Voice of the Empire

If my work is over and if in vain I hoped at the close of life That peace would fall with the evening, not passion and hate and strife, I can still give thanks as my sun goes down for one treasure o