The Navy Knocks at Hitler's Back Door

Swooping out of the blue on the Lofoten Islands, a joint British and Norwegian force delivered a lightning thrust at Hitler's power in this northern extremity of his realm. Below we tell the story of the raid of March 4, as it has been revealed in a joint Admiralty and Norwegian Naval communiqué, supplemented by the eye-witness account by Reuter's Special Correspondent.

Early on the morning of Tuesday, March 4, in cold so intense that the spray froze as it broke over the boats, an Anglo-Norwegian raiding force made its appearance off the Lofoten Islands in the channel leading to Narvik, on what has been described as "Hitler's back doorstep".

The raid was planned with a threefold object. In the first place it was desired to destroy the plant used for the production of fish oil. This is the season in the Lofoten area in which the production of fish oil takes place, and the whole of the fishery products, like all other Norwegian products required by Germany are entirely absorbed by the enemy; the fish oil produced was of particular importance to Germany, as it is used as glycerine in the making of explosives. The second object was to destroy any German ships or ships under German control found in the locality. Thirdly, it was desired to take prisoner Germans concerned in the control of the fishing industries, and such local "Quislings" who were aiding and abetting the enemy.

The raiders were composed of handpicked and specially-trained British troops and Norwegian marines armed with Tommy-guns and accompanied by Norwegian guides. Arrived off their objectives  Svolvær and three other principal fishing ports of the islands  the landing-parties were put ashore before anyone there had time to discover what was happening.

"Within ten minutes of landing", said Reuter's Special Correspondent, who accompanied one of the parties, "the troops had taken control of the telegraph station, post office, and police office. Next they turned their attention to the oil, cod liver oil, and cod-fishing factories known to be working for the Germans, and soon six of these had been destroyed. The English manager of one factory was rescued and brought back to Britain. Three petrol storage tanks were also destroyed by this group, one going up in flames."

Explosions, intermittent gunfire and clouds of smoke told of the progress of the raiding-parties. Fish-oil factories and a power station were destroyed and the oil storage tanks set on fire. One of the parties sank a 10,000-ton floating fish-oil factory after taking from the ship a number of prisoners. Altogether, nine German vessels and one Norwegian merchant vessel under German control were sent to the bottom, and also a German armed trawler. Losses inflicted upon enemy shipping totalled approximately 18,000 tons.

Every care was taken to safeguard the lives and property of the local people, and the opportunity was taken to supply them with "comforts" such as chocolate, cocoa, tobacco, cigarettes, flannel, leather and knitting-wool  all things which they had been robbed of since the German occupation. Some of the fishermen bartered their fish with the men in the warships for English cigarettes and bully-beef.

Having achieved all their objects, the Allied forces withdrew. But they went back more numerous than when they came, for they took with them 215 German prisoners  mostly seamen, but including several naval officers, two of high rank, and 20 German airmen  and ten of the local "Quislings". They were also accompanied by a number of Norwegian Loyalists, for powerful load-speakers had been used to state that the crews would be willing to take on board any volunteers for the Norwegian Free Forces. Hundreds of young men immediately responded, and as the ships were there for several hours they had time to get their best clothes and pack up all they wanted.

Practically no opposition was encountered, the little there was coming from the German armed trawler, which returned the fire of one of the warships, but was quickly disposed of. One German naval officer and six ratings were killed, but no damage or casualties were sustained by our forces.

When, after hours of unmolested activity, the raiders withdrew they glanced back at a dense black column of smoke billowing out far above the clouds, while another enveloped the mountains for miles in a thick foglike pall. Only when the ships had left the islands behind them did a solitary German aeroplane make its appearance. But before it could drop a single bomb it was driven off by fire from the warships.

Swiftly the warships returned to Britain, where the prisoners were sent to a prison-camp and the patriots proceeded to London. There they had the intense gratification of being congratulated by King Haakon. 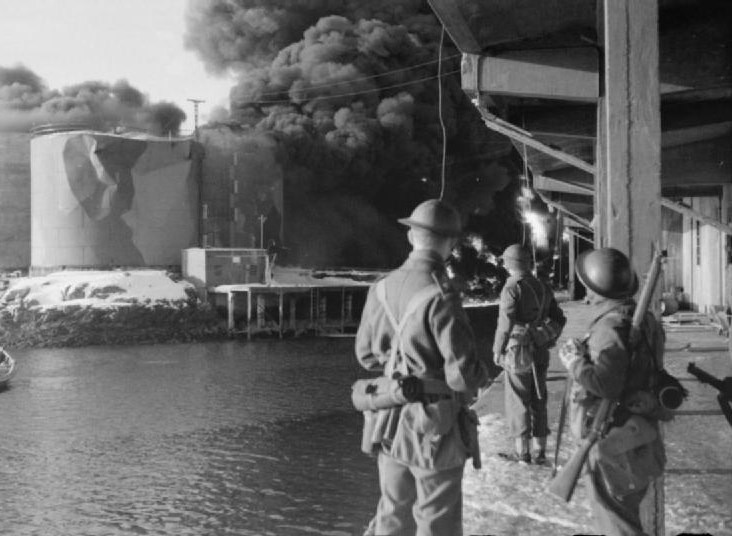 Lofoten's Oil Tanks Fired by the British. During the brilliant raid on the Lofoten Islands carried out by British forces on March 4, 1941, 26 oil plants in the islands were completely wrecked. Briti

I Was There! - Greek Islanders Treated Me Like a King

Here is another first-hand story of the R.A.F. units who are cooperating with the Greeks on the Albanian front. It depicts the difficult climatic conditions under which they work and, like earlier sto