I Was There! - How Our Catalina Shadowed the Bismarck

American-built Catalina flying-boats of the R.A.F. Coastal Command played a vital part in the tracking down of the ill-fated Bismarck. On occasion they encountered heavy fire from the battleship, as the following story by one of the pilots relates.

The Bismarck was discovered in the Norwegian fiords and attacked in a storm by American-built Hudsons. Later on, when she was sighted by ships of the Royal Navy in the North Atlantic, shadowing was taken up by a Sunderland flying-boat, which subsequently witnessed the first engagement between the British and German forces. This Sunderland was relieved by a Catalina, which continued to shadow the Bismarck as she fled southward.

From this time onwards Catalina flying-boats cooperated with H.M. ships in keeping a watch on her every movement and device to evade close action. The Catalinas quartered the sea, so that there was the scantiest possibility of the Bismarck's avoiding detection for any length of time. As the captain of one of the flying-boats said. "We swept the seas in gigantic patterns, hopping from cloud to cloud."

But the Catalinas had to break cloud now and then. Their crews paid high tribute to the A.A. armament and the skill of the German gunners. A flying-boat might leave cloud for only a few seconds, but that was sufficient for the enemy guns to come into action and surround the aircraft with bursting shells.

The pilot of one Catalina which ran into heavy fire from the Bismarck told the following story:

We left our base at 3.30 in the morning, and we got to the area we had to search at 9.45. It was a hazy morning with poor visibility, and our job was to regain contact with Bismarck, which had been lost since early Sunday morning. About an hour later we saw a dark shape ahead in the mist. We were flying low at the time. I and the second pilot were sitting side by side and we saw the ship at the same time. At first we could hardly believe our eyes. I believe we both shouted "there she is", or something of the sort.

There was a forty-knot wind blowing and a heavy sea running and she was digging her nose right in, throwing it white over he bows. At first, as we weren't sure that it was an enemy battleship, we had to make certain, so we altered course, went up to about 1,500 feet into a cloud, and circled. We thought we were near the stern of her, when the cloud ended and there we were, right above her. The first we knew of it was a couple of puffs of smoke just outside the cockpit window, and a devil of a lot of noise, and then we were surrounded by dark brownish black smoke as she pooped off at us with everything she'd got. She'd been supposed to have only eight anti-aircraft guns, but fire was coming from more than eight places  in fact she looked just one big flash. The explosions threw the flying-boat about and we could hear bits of shrapnel hit the hull. Luckily only a few penetrated.

My first thought was that they were going to get us before we'd sent the signal off, so I grabbed a bit of paper and wrote out the message and gave it to the wireless operator. At the same time the second pilot took control and took avoiding action. I should say that as soon as the Bismarck saw us she'd taken avoiding action too, by turning at right angles, heeling over and pitching in the heavy sea.

When we'd got away a bit we cruised round while we inspected our damage. The rigger and I went over the aircraft, taking up floor boards and thoroughly inspecting the hull. There were about half-a-dozen holes, and the rigger stopped them up with rubber plugs. We also kept an eye on the petrol gauges, because if they were going down too fast, that meant that the tanks were holed and wouldn't stand much chance of getting home. However, they were all right, and we went back shadow Bismarck. There we met another Catalina. She'd been searching an area north of us when she intercepted our signals, and closed. On the way, she'd seen a naval force, also coming towards us at full belt through the heavy seas. They were part of our pursuing fleet.

When we saw this Catalina I went close alongside. I could see the pilot through the cockpit window and he pointed in the direction the Bismarck was going. He had come to relieve us and it was just as well, because the holes in our hull made it essential to land in daylight.

We landed after half-past nine at night, after flying for just over eighteen hours. But one of our Catalinas during this operation set up a new record for Coastal Command of 27 hours on continuous reconnaissance.

How the Royal Navy Avenged the Hood

Continued from the previous page. A second hit was obtained by a torpedo on the starboard quarter of the German battleship. It was subsequently reported that on being hit during this attack the Bis 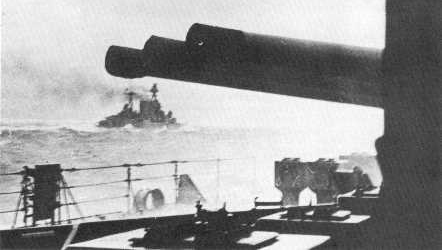 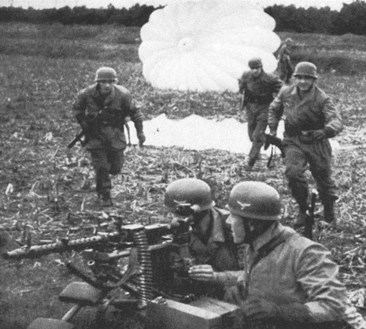 Why, O Why, Did it Happen in Crete?

Perchance Official Optimism Is a Greater Menace to Our Cause Than 'Dangerously Unorthodox' Methods of the Nazis Let us be fair. The Germans have learnt to use the air in war in a way never before a