First years
Henri Winkelman was born on August 17th, 1876 in Maastricht. He was a son of Julius Hendrik Winkelman, inspector of registration of Crown Properties, and Charlotte Henriëtte Braams. After his education at the HBS (Higher Trade-Business School) he went to the KMA, the Royal Military Academy, at Breda. He wanted to become an officer in the KNIL, the Royal Netherlands Indies Army. During his time at the KMA he changed his plan and he was placed in the infantry as a cadet in the rank of corporal. He was a member of various cadet fraternities amongst which a shooting fraternity and another one for music. In 1896 he was appointed lieutenant. In the meantime he married Arendin Jacomina Coert. From their marriage were born two sons and two daughters. After a successful study which he later continued at the Hogere Krijgsschool in the Hague, an institute for higher general staff education, he passed easily through the officer ranks of the various departments of the army. He was assigned to the department general staff of the Ministry of Defense between 1909-1913 and 1917-1924. Henri Winkelman was promoted to captain in 1913 and in 1923 he became a major. In 1931 he became major-general and was commanding officer of the 4th Division which was stationed near the garrison town of Amersfoort. In 1934 he was promoted to lieutenant-general. He left the service after being honorably discharged. The reason for this was that general I.H.Reynders was chosen in his place as Chief of Staff. Winkelman, as a retired higher officer, kept on working for the defense of the country in different ways. He was member in the Defense Commission for Appeal and from 1938 on he advised the board of directors from the Philips company concerning the measures to be taken in case of war.

Discharge and return
After war broke out in Europe in September 1939 and the Dutch army was mobilized tensions rose for various reasons between A. Dyxhoorn, Minister of Defence, and Chief of Staff general Reynders. Most of the friction between these two was due to the strategy that would be followed. Reynders wanted to have two main lines of defense, i.e. the first at the Grebbe Line and the second one behind the New Dutch Water Line. Should the enemy break through the Grebbe Line, then the forces in that line could fall back on prepared defenses behind the New Dutch Water Line. Reynders did not receive full cooperation and the necessary support from the government of prime minister Dirk Jan de Geer and was fired. This was quite a dangerous situation in a perilous time because who was to take over command of the Dutch army? After an emergency session in The Hague it was former Minister of Defense, Dijk, who put forward Winkelman remembering his ability and dedication. Without knowing what had happened in his absence, Winkelman travelled to The Hague on a late evening in January 1940. Here he was asked to become Commander in Chief of the Dutch armed forces and would receive all the freedom he thought would be necessary in this position. After a day of considering he let minister Dijxhoorn know that he would accept the offer if he were appointed to Supreme Commander of the army and navy and at the same time he was made general. With four silver stars and the crossed marshall batons on his sleeve general Winkelman entered General Headquarters in The Hague on February 6th,1940. With the liberty that was promised him upon his appointment he made lieutenant-general H. van Voorst tot Voorst his Chief of Staff.

Strategy
Winkelman was appointed Supreme Commander in a period that was difficult to say the least. Still he managed to win the confidence of the government and the Queen with his excellent leadership. According to the assignment he had received from the government and aware of the German threat, a whole new strategy was made which described exactly what needed to be defended. The core of the defense according to Winkelman's vision was the "heart of the country", east of which, a defensive fight had to be prolonged as long as possible in order to eventually recapture the lost Dutch soil with support from the Allies. Also two large army contingents, the Licht Division and 3rd Corps, were relocated from the defense of the Peel-Raam Line in the east of the province of North Brabant to the "Fortress Holland". In Winkelman's opinion the Moerdijk bridges south of Dordrecht and Rotterdam over the broad Hollands Diep constituted a key communication with the Allies. With this new strategy the defense of North Brabant was all but abandoned.. Nowhere in the country Winkelman chose an offensive strategy and he opted for a so called "closed front strategy". North of the large rivers Meuse, Waal and Nether Rhine the commander in chief chose for the defense of the Grebbe Line.

When the German attack took place on May 10th,1940 it turned out that the preparedness of the Dutch forces was not optimal at some parts of the front. An important fact is also that Winkelman went to sleep at his home in Wassenaar at the night of the attack and thus was not actually present at the General Headquarters in the early morning of May 10th, 1940. The underequipped staff also made some important mistakes in this crucial period concerning alerting the air forces when the Germans crossed the border. In the meantime the commander of military aviation tried desperately to get in contact with GHQ because hundreds of German airplanes had flown over him but to no avail. In the early morning Winkelman left for The Hague under dangerous circumstances. During this hectic ride many German planes flew over him and German paratroopers and airborne infantry had landed en masse in the area. Winkelman arrived safely at the Lange Hout where GHQ was located. He made an urgent appeal to the Allies and a lot was expected especially from France and her mobile divisions but the highest priority was the Fortress Holland. The high speed of the German advance however was a complete surprise for Winkelman and his staff. The most important bridges at Moerdijk, Dordrecht and Rotterdam fell into German hands rather quickly.

Above The Hague, a German transport plane was shot down and from the documents found inside, it was discovered that the airborne attack had a political objective to capturing the Queen, the government and the commanders of the army. Quickly general Winkelman decided to seal off all of The Hague. However the German advance from 9. Panzer-Division in the south and the attack at the Grebbeberg, the lynchpin of the Grebbe Line, went so fast that soon this proved impossible. Finally the bombing of Rotterdam coupled with the German threat of repeating this with other Dutch cities was the decisive factor for laying down arms and on May 15th, general Winkelman ordered the capitulation in a school in Rijsoord.

Last years
After the capitulation Winkelman refused to adapt and cooperate with the German occupier and therefore remained a POW during the war years. After the war on October 1st, 1945 he was honorably discharged from military service. He was decorated with the highest royal medal (Militaire Willems Orde) and after his death in December 1952 he was honored with the renaming of the army base in Nunspeet to Generaal Winkelman Kazerne.

In some depictions, Winkelman is associated directly with the capitulation of the Netherlands in 1940. Because of this act he is unfairly placed in the role of a loser. Winkelman was a loyal soldier, who with the limited resources at his disposal and against overwhelming odds, sought for an optimal defense plan and the execution thereof. In the frightening days of May 1940, he proved himself to be a loyal servant to the Queen, the government and the Dutch people who in 1940 still had a long time of suffering and misery awaiting them. His role in those days is, in my opinion, all too often underestimated.

capitulation
Agreement between fighting parties concerning the surrender of a country or an army.
Division
Military unit, usually consisting of one upto four regiments and usually making up a corps. In theory a division consists of 10,000 to 20,000 men.
front
Largest Soviet ground formation. It was attached to a certain area which gave its name to the units involved. For instance the Voronezh front.
infantry
Foot soldiers of a given army.
KNIL
Koninklijk Nederlands-Indisch Leger meaning Royal Netherlands East Indies Army (1830-1950). Name of the Dutch army in the Netherlands East Indies.
offensive
Attack on a smaller or larger scale.
paratroopers
Airborne Division. Military specialized in parachute landings.
POW
Prisoner of War.
strategy
Art of warfare, the way in which war should be conducted in general. 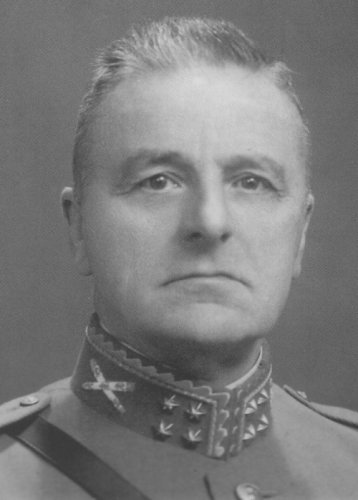