One of the major shortcomings of the German Luftwaffe during the Second World War was the almost total lack of long-range heavy bombers. Not long after the Germans had begun their assault on Great-Britain, they found themselves in need of a heavy bomber suitable for attacking the British convoys far out in the Atlantic Ocean. Since the need was urgent and the time to develop a new aircraft was too short, there was only one option open to them, converting the new airliner designed by Kurt Tank, the Focke Wulf Fw 200 Condor, to a bomber. Strangely, this became one of the most succesful conversions of the war, although the Condor was not ideally suited for this role. The success lay in the fact that British convoys were extremely vulnerable to and inadequately protected from aerial attacks.

Luftwaffe
German air force.
Tank
A combat vehicle with heavy armour and heavy armament driving on tracks. The tank, despite its heavy weight, is very mobile and able to move along various types of terrain. These properties, along with heavy firepower and protecting armour, give the tank a big strike power. 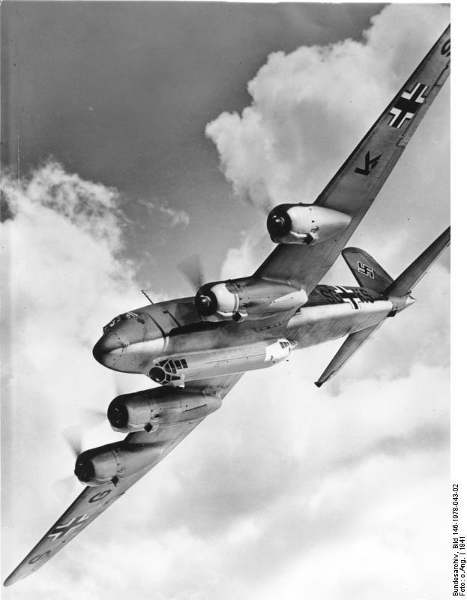 The Focke Wulf Fw 200 was originally designed as a long-range airliner for the Lufthansa. The prototype, the Fw 200V1 with the registration D-AERE made its maiden flight on July 27th, 1937 and was flown by Kurt Tank himself. This aircraft was equiped with 4 Pratt & Whitney Hornet S1E-G engines at 875 hp each. It was succeeded by the Fw 200V2 Westfalen and the Fw 200V3 Immelmann, equiped with 4 BMW 132G1 engines of 720 hp each. The Imnmelmann would later become Adolf Hitlers private aircraft.

The first long-distanceflight was made on July 27th, 1939 by Kurt Tank, flying the Westfalen from Berlin to Caïro. Two weeks later the V1, which in the meantime had been renamed Brandenburg and had received the registration D-ACON, flew non-stop from Berlin to New York in 24 hours and 55 minutes crewed by Henke and Von Moreau and. The average speed was, albeit with a strong headwind, 164 mph. The returnflight took 19 hrs and 47 m with an average speed of 205 mph. The most famous flight was made on November 28th, 1938, again by Henke and Von Moreau in D-ACON from Berlin to Tokio in 45hrs and 18 m, including fuel stops. Shortly after, the aircraft was lost in an emergency landing in the Philippines.

Four subtypes were developed from the Fw 220V prototype: the Fw 300, an improved 200 which did not make it past the drawingboard however and the Fw 200A, B and C.

The 200A was the first true civilian version of the Condor, it appeared in 1938 and was used mainly as a demonstration aircraft. Of this type, nine aircraft were built, two were exported to Denmark and another two to Brazil. Together with the first two prototypes, the Fw 200A fleet numbered 11 planes. The aircraft had a crew of five and could carry 26 passengers. It was powered by four BMW 132G1 engines of 720 hp.

The Fw 200B was a heavier version of the 200A, equiped with new engines and made its maiden flight in 1938. One aircraft was completed in a military version for the Japanese navy. They had shown great interest in the aircraft in the long-range maritine reconnaissance role. One Fw 200B-1 was specifically built as a military version with additional fuel tanks and gunpositions on top of the fuselage. However, no aircraft were delivered to Japan.

The Fw 200B was in fact the only German long-range aircraft. Due to the aforementioned lack of such aircraft, the Reichsluftfahrtministerium (RLM, Imperial Department of Aviation) ordered this last prototype, the Fw 200V10 to be developed further for use by the Luftwaffe and this ultimately led to the final military version, the Fw 200C. The last aircraft were therefore completed as military aircraft and given the designation Fw 200C-0.

Two more subtypes, based on the Fw 200B were developed. First the B-1 which should have become the definite civilian version with four BMW 132Dc engines at 850hp each, but the high cost and a war looming killed any export contract. They were deployed only as military transports and not a single plane survived the war. Finally the B-2 with the somewhat less powerful BMW 132H at 830 hp. Only the last B-2 survived the war, the one but last crashed near Berlin on April 21st, 1945. Both types had a crew of five. From the fall of 1938 until 1940, 12 aircraft of the B version were built.

When it became clear after the Munich Conference that Germany would soon be at war with Great Britain, the Chief of Staff of the Luftwaffe, General Hans Jeschonek ordered the establishment of a long-range anti-shipping unit to be commanded by Lieutenant-colonel Edgar Petersen. It was intended to equip this unit with the Heinkel He 177 Greif (Griffon) but because this aircraft coud not be finished on time, RLM ordered Kurt Tank to proceed work on a production version of the Fw 200V10 and subsequently 10 pre-production Fw 200C-0s were ordered.

Luftwaffe
German air force.
Tank
A combat vehicle with heavy armour and heavy armament driving on tracks. The tank, despite its heavy weight, is very mobile and able to move along various types of terrain. These properties, along with heavy firepower and protecting armour, give the tank a big strike power. 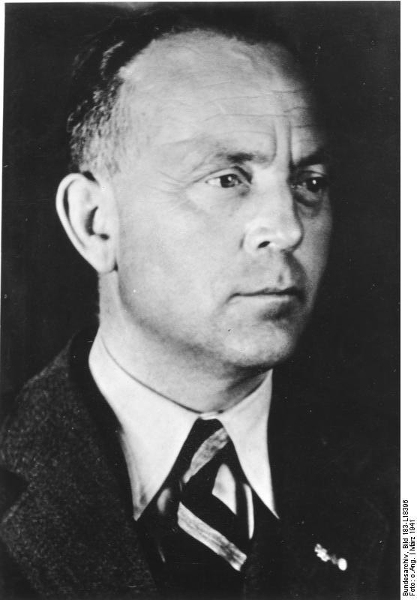 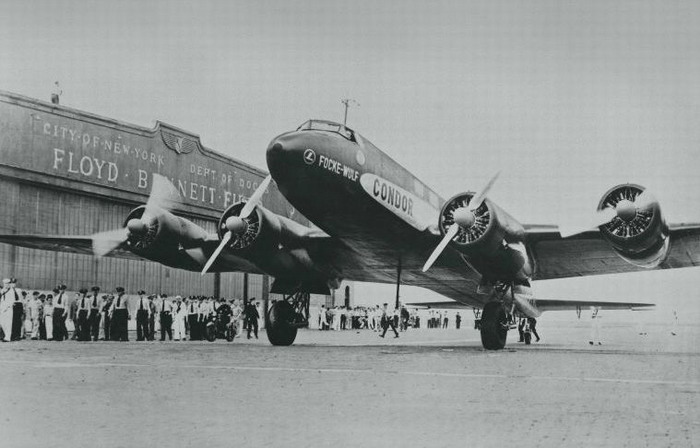 In 1938 the Focke Wulf 200 flew non-stop from Berlin to New York. Source: Aerosieger. 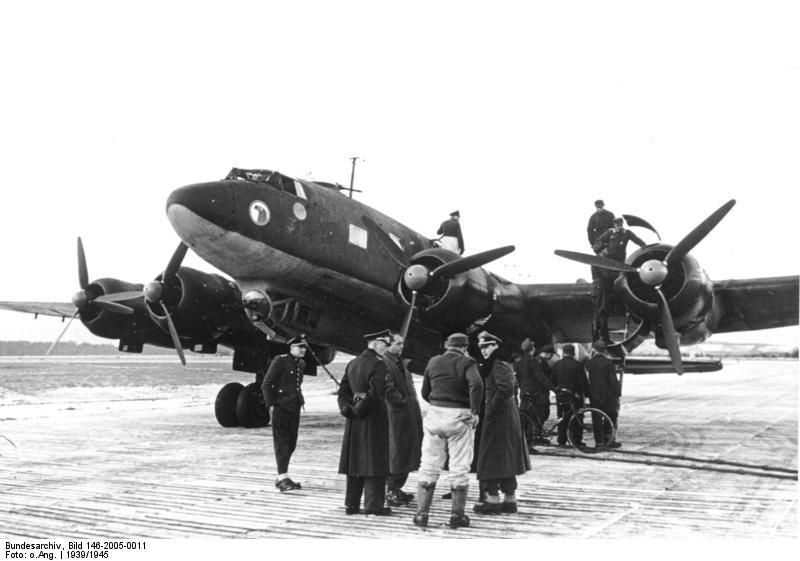 The first C-0s were developed from the 200B as already mentioned. They differed from the B version by a strengthened airframe and an undercarriage with more wheels for use on rough runways.

The first four pre-production models were completed as transportplanes and were, unarmed, ready just in time to enter service in april 1940 with KGrzbV 105 (Kampfgruppe zur besondere Verwendung. Special Duties Squadron) for the invasion of Norway. The other six were equiped with armament and delivered to the Fernaufklärungsstaffel (Long-range reconnaissance squadron) under Petersen and deployed on operations against British shipping in the North Sea. At the end of February, the unit was renamed 1 Staffel/KG 40 and stationed at Bordeaux after the fall of France.

invasion
Armed incursion.
Kampfgruppe
Temporary military formation in the German army, composed of various units such as armoured division, infantry, artillery, anti-tank units and sometimes engineers, with a special assignment on the battlefield. These Kampfgruppen were usually named after the commander.
Squadron
A military unit in the Belgian navy usually six to eight small ships operating together under one command. The smallest military unit in the Dutch air force of about 350 men. In most countries is the designation of a military unit thesize of a company. It is either an independent unit, such as a battery, or part of a bigger Calvary unit. In the air force it is the designation of a unit of aircrafts. 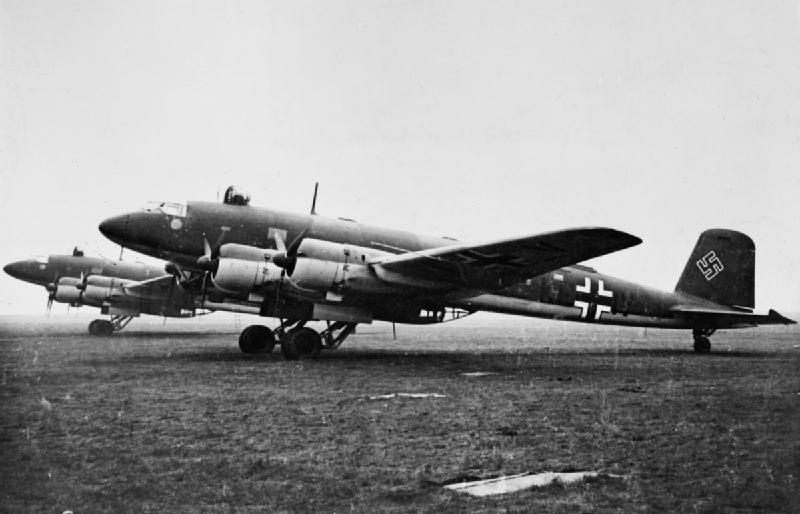 The successor of the C-0 was the C-1. It featured an oblong cupola under the fuselage while the forward turret was replaced by a blister. The C-1 was not very popular. It had the nasty habit of breaking its fuselage in half after rough landings if the landing gear broke off behind the wing. There were also many complaints about the inadequate defensive armament. The C-2 was a transition model to wait for the C-3 which was to be redesigned.

A shortcoming of the Condor was its weak undercarriage causing numerous accidents on take off and landing. 1941 saw the design of the C-3 in an attempt to remedy this defect but with limited success. The defensive armament was also increased. The blister on the previous models was once again replaced by an upper turret and sliding panels for machineguns were fitted in the sides of the fuselage. The crew was enlarged from 5 to 6; instead of BMW engines, the arcraft was equiped with 4 Bramo Fafnier 323R-2 engines delivering 1.000 hp each and the bombload was increased to 4630 lbs.

From this type, 4 subtypes were developed, i.e. the C-3/U1 up to the C-3/U4. The U1 featured a heavier armament than its predecessors, cannon in stead of machineguns but the new and larger upper turret caused a considerable decrease in speed. The U2 featured an improved aiming device for the bombs but this was so heavy that the armament had to reduced again: the cannon were replaced by machineguns. The U3 now had two machineguns in its upper turret, the U4 had a larger fuel capacity which increased the range but also the weight of the aircraft and the airframe was already overstressed. The armament was also altered.

Finally the Fw 200C-4, C-6 and C-8. The C-4 was an improved version of the C-3 which entered production from 1942 onwards and was equiped with a standard new FuG Rostock radar (later the FuG 200 Hohentwiel). The upper turret had become a standard feature too. Early 1943, a C-3 was converted in order to be equiped with the Henschel Hs 293 flying bomb and this became the C-6. The bombs were carried beneath the outer nacelles and guided from a position in the nose of the aircraft. The last version of the Condor that was built, was the C-8, specifically built for attacks on shipping with the Hs 293. Aircraft that were equiped with the Hohentwiel searching and aiming radar received the designation Fw 200C-8/U10. 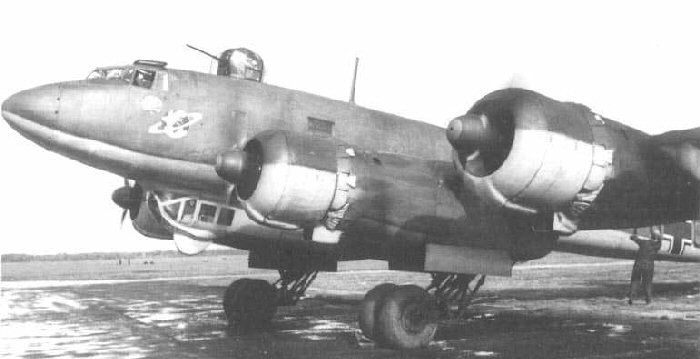 The first Condor bombers entered service in late 1940 and in a short time, the ponderous raider with its distinctive offset gondola became an ominous sight to Allied seamen. Working with the notorious U-boats, the Condors would guide the German submarines directly to the Allied convoys. With Condors attacking from above and U-boats from below, the losses of Allied shipping rose dramatically. The heavy forward armament proved extremely succesful in low level attacks and the Condors, roaming the Atlantic almost unmolested, sank hundreds of thousands of tons of Allied shipping and Churchill called them the: "Scourge of the Atlantic".

In an attempt to improve the defence of the convoys, Hawker Hurricanefighters were mounted on catapults aboard merchantships (CAM ships), to be launched when the dreaded Condors came in sight. These so called Hurricats scored their first victory on August 3rd, 1941 when a Condor was shot down by one.

From early 1943 onwards, the Condors met increasing opposition from American B-24 Liberators and Consolidated PB4Y-1 Privateers and they proved no match for these opponents. Moreover, ever more anti-aircraft guns were mounted on a growing number of ships so the Condors had to attack from a higher altitude, making them less effective. Consequently they were gradually pulled back and replaced by the far less succesful Heinkel He 177 Greif.

From mid 1944 onwards, the Condors rarely made any transportflights. The last unit that was created was Transportstaffel 200 (Transport wing) under Kapitän Heinz Bauer, using the original V3 and V6 prototypes for the transport of staffofficers. Maybe the best known of these aircraft was that of Heinrich Himmler, a C-4/U1 that was captured at the end of the war and flown to the Royal Aircraft Establishmenty at Farnborough for evaluation.

In total, 279 Condors were built by Focke Wulf in Cottbus and Blohm und Voss in Hamburg, including all prototypes. Of these, 266 saw active military service.

It has been tried to market an improved type, developed from the Fw 200, the Fw 300. The prototype was scheduled for 1940 but it did not make it past the drawingboard. The aircraft would have a wingspan of 152 ft, a length of 102 ft and would be powered by four Jumo 222 or four Daimler Benz DB 603 engines. 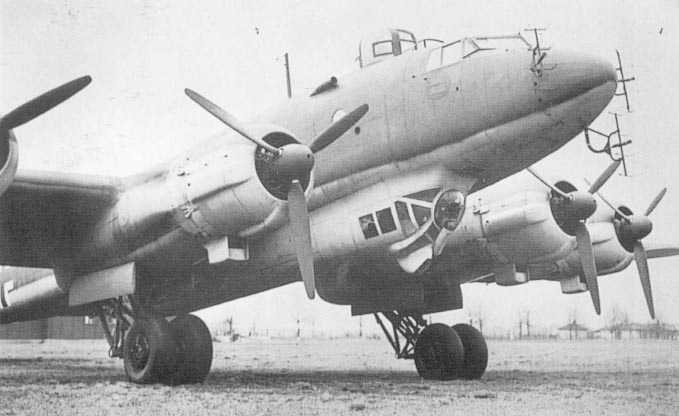