Göring is indicted on all four Counts of the Indictment (explanation). The evidence shows that after Hitler, he was the most prominent man in the Nazi regime. He was Commander-in-Chief of the Luftwaffe, Plenipotentiary for the Four Year Plan and had tremnendous influence with Hitler, at least until 1943 when their relationship deteriorated, ending in his arrest in 1945. He testified that Hitler kept him informed of all important military and political problems.

From the moment he joined the Party in 1922 and took command of the streetfighting organisation, the SA, Göring was the adviser, the active agent of Hitler and one of the prime leaders of the Nazi movement. As Hitlers political deputy, he was largely instrumental in bringing the National Socialists to power in 1933 and was charged with consolidating this power and expanding German armed might.
He developed the Gestapo and created the first concentration camps, relinguishing them to Himmelr in 1934; conducted the Röhm purge in that year and engineered the sordid proceedings which resulted in the removal of Von Blomberg and Von Fritsch from the Army. In 1936, he became Plenipotentiary for the Four Year Plan and in theory and in practice was the economic dictator of the Reich.
Shortly after the Pact of Munich, he announced that he would embark on a five-fold expansion of the Luftwaffe and speed up rearmament with emphasis on offensive weapons.
Göring was one of the five important leaders present at the Hossbach conference of 5 November 1937 and he attended the other important conferences already discussed in this Judgment. In the Austrian Anschluss, he was indeed the central figure, the ringleader. He said in court: "I must take 100 percent responsibility I even overruled objections by the Führer and brought everything to its final development". In the seizure of the Sudetenland, he played his role as Luftwaffe chief by planning an air offensive which proved unnecessary, and his role as a politician by lulling the Czechs with false promises of friendship. The night before the invasion of Czechoslovakia and the absorption of Bohemia and Moravia, at a conference with Hitler and President Hacha, he threatened to bomb Prague if Hacha did not submit. This threat he admitted in his testimony.
Göring attended the Reich Chancellory meeting of 23 May 1939, when Hitler told his military leaders: "there is therefore no question of sparing Poland" and was present at the Obersalzberg briefing of 22 August 1939. And the evidence shows he was active in the diplomatic manouevres which followed. With Hitlers connivance, he used the Swedish businessman Dahlerus, as a go-between to the British, as described by Dahlerus to this Tribunal, to try to prevent the British Government from keeping its guarantee to the Poles.
He commanded the Luftwaffe in the attack on Poland and throughout the aggressive wars which followed.
Even if he opposed Hitlers plans against Norway and the Soviet Union, as he alleged, it is clear that he did so only for strategic reasons; once Hitler had decided the issue, he followed him without hesitation. He made it clear in his testimony that these differences were never ideological or legal. He was in a rage about the invasion of Norway, but only because he had not received sufficient warning to prepare the Luftwaffe offensive. He admitted he approved of the attack: "My attitude was perfectly positive".
He was active in preparing and exeuting the Yugoslavian and Greek campaigns and testified that Plan Marita, the attack on Greece had been prepared long beforehand. The Soviet Union he regarded as the "most threatening menace to Germany " but said there was no immediate military necessity for the attack. Indeed, his only objection to the war of aggression against the U.S.S.R.was the timing; he wished for strategic reasons to delay until Britain was conquered. He testified: "My point of view was decided by political and military reasons only"
After his own admissions to this Tribunal, from the positions which he held, the conferences he attended and the public words he uttered, there can remain no doubt that Göring was the moving force for aggressive war second to Hitler. He was the planner and prime mover in the military and diplomatic preparation for war which Germany pursued.

The record is filled with Görings admissions of his complicity in the use of slave labor. "We did use this labor for security reasons so that they would not be active in their own country and would not work against us. On the other hand, they served to help in the economic war". And again: "Workers were forced to come to the Reich. That is something I have not denied". The man who spoke these words was Plenipotentiary for the Four Year Plan charged with the recruitment and allocation of manpower. As Luftwaffe Commander-in-Chief he demanded from Himmler more slave laborers for his underground aircraft factories: "That I requested inmates of concentration camps for the armament of the Luftwaffe is correct and it is to be taken as a matter of coursde"
As plenipotentiary, Göring signed a directive concerning the treatment of Polish workers in Germany and implemented it by regulations of the SD, including "special treatment". He issued directives to use Soviet and French prisoners of war in the armament industry, he spoke of seizing Poles and Dutch and making them prisoners of war if necessary and using them for work. He agrees Russian prisoners of war were used to man anti-aircraft batteries.
As plenipotentiary, Göring was the active authority in the spoliation of conquered enemy territory. He made plans for the spoliation of Soviet territory long before the war on the Soviet Union. Two months prior to the invasion of the Soviet Union, Hitler gave Göring the overall direction for the economic administration in the territory. Göring set up an economic staff for this function. As Reichsmarschall of the Greater German Reich: "the orders of the Reichsmarschall cover all economic fields including nutrition and agriculture". His so called Green Folder, printed by the Wehrmacht, set up an Economic Executive Staff East (Wirtschaftsstab Ost). This directive contemplated plundering and abandonment of all industries in the food deficit regions and from the food surplus regions a diversion of foods to German needs. Göring claims its purposes have been misunderstood but admits: "that as a matter of course and a matter of duty, we would have used Russia for our purposes" when conquered.
And he participated in the conference of 16 July when Hitler said the National Socialists had no intention of ever leaving the occupied countries and that "all necessary measures - shooting, resettling etcetera - should be taken."
Göring persecuted the Jews, especially after the November 1938 riots and not only in Germany, where he raised the billion Mark fine as stated elsewhere, but in the conquered territories as well. His own utterances then and his testimony now shows this interest was primarily economic - how to get their property and how to force them out of the economic life of Europe. As these countries fell before the German Army, he extended the Reichs anti-Jewish laws to them; the Reichsgesetzblatt 1939, 1940 and 1941 contains several anti-Jewish decrees signed by Göring. Although their extermination was in Himmlers hands, Göring was far from disinterested or inactive, despite his protestations in the witness box. By decree of 31 July 1941, he directed Himmler and Heydrich to "bring about a complete solution of the Jewish question in the German sphere of influence in Europe".
There is nothing to be said in mitigation. For Göring was often, indeed almost always, the moving force, second only to his leader. He was the leading war aggressor, both as political and as military leader; he was the director of the slave labor program and the creator of the oppressive program against the Jews and other races, at home and abroad. All of these crimes he has franky admitted. On some specific cases there may be conflict of testimony, but on terms of the broad outline, his own admissions are more than sufficiently wide to be conclusive of his guilt. His guilt is unique in its enormity. The record discloses no excuses for this man

The Court finds the Defendant Göring guilty on all four Counts of the Indictment.

crimes against humanity
Term that was introduced during the Nuremburg Trials. Crimes against humanity are inhuman treatment against civilian population and persecution on the basis of race or political or religious beliefs.
Four Year Plan
A German economic plan focussing at all sectors of the economy whereby established production goals had to be achieved in four years time.
Führer
German word for leader. During his reign of power Adolf Hitler was Führer of Nazi Germany.
Gestapo
Geheime Staatspolizei. Secret state police, the secret police in the Third Reich.
invasion
Armed incursion.
Jews
Middle Eastern people with own religion that lived in Palestine. They distinguished themselves by their strong monotheism and the strict observance of the Law and tradition. During World War 2 the Jewish people were ruthlessly persecuted and annihilated by the German Nazis. . An estimated 6,000,000 Jews were exterminated.
Luftwaffe
German air force.
Nazi
Abbreviation of a national socialist.
offensive
Attack on a smaller or larger scale.
Soviet Union
Soviet Russia, alternative name for the USSR.
war crimes
Crimes committed in wartime. Often concerning crimes committed by soldiers against civilians.
Wehrmacht
German armed military forces, divided in ground forces, air force and navy. 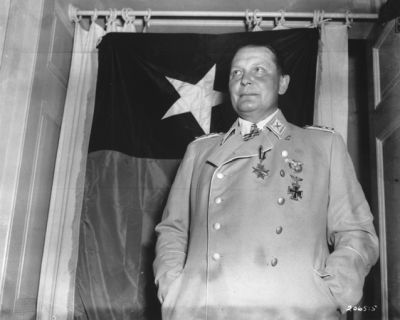 Hermann Göring after his arrest by the Americans Source: USHMM.