Hess is indicted on all four Counts of the Indictment (explanation).He joined the Nazi Party in 1929 and participated in the Munich Putsch on 9 November 1923. He was imprisoned with Hitler in the Landsberg fortress in 1942 and became Hitlers closest personal confidant, a relationship that lasted until Hess flight to the British Isles. On 21 April 1933, he was appointed Deputy to the Führer and on 1 December 1933, was made Reichsminister without Portfolio. He was appointed member of the Secret Cabinet Council on 4 February 1938 and a member of the Ministerial Council for the Defence of the Reich on 31 August 1939. In September 1939, Hess was officially announced by Hitler as successor designate to the Führer after Göring. On 10 May 1941, he flew from Germany to Scotland.

As Deputy to the Führer, Hess was the top man of the Nazi Party with responsibility for handling all Party matters and authority to make decisions in Hitlers name on all questions of Party leadership. As Reichsminister without Portfolio he had the authority to approve all legislation suggested by the different Reichsministers before it could be enacted as law. In these positions, Hess was an active supporter of preparation for war. His signature appears on the law of 16 March 1935, establishing compulsory military service.
Throughout the years he supported Hitlers policy of vigorous rearmament in many speeches. He told the people that they must sacrifice for armaments, repeating the phrase "Guns instead of butter". It is true that between 1933 and 1937, Hess made speeches in which he expressed a desire for peace and advocated international economic co-operation. But nothing which they contained can alter the fact that of all the defendants, none knew better than Hess how determined Hitler was to realize his ambitions, how fanatical and violent a man he was and how little likely he was to refrain from resorting to force, if this was the only way in which he could achieve his aims.
Hess was an informed and willing participant in German aggression against Austria, Czechoslovakia and Poland. He was in touch with the illegal Nazi Party in Austria throughout the entire period between the murder of Dolfuss and the Anschluss and gave instructions to it during that period. Hess was in Vienna on 12 maart 1938 when the German troops moved in and on 13 March 1938 he signed the law for the reunion of Austria within the German Reich. A law of 10 June 1939 provided for his participation in the administration of Austria. On 24 July 1938, he made a speech in commemoration of the unsuccesful Putsch by Austrian National Socialists which had been attempted four years before, praising the steps leading up to the Anschluss and defending the occupation of Austria by Germany.
In the summer of 1938, Hess was in active touch with Henlein, Chief of the Sudeten German Party in Czechoslovakia. On 27 September 1938, at the time of the Munich crisis, he arranged with Keitel to carry out the instructions of Hitler to make the machinery of the Nazi Party available for a secret mobilization. On 14 April 1939, Hess signed a decree, setting up the Government of the Sudetenland as an integral part of the Reich; and an ordinance of 10 June 1939 provided for his participation in the administration of the Sudetenland. On 7 November 1938, Hess absorped Henleins Sudeten German Party into the Nazi Party and made a speech in which he emphasized that Hitler had been prepared to resort to war if this had been necessary to acquire the Sudetenland.
On 27 August 1939, when the attack on Poland had been temporarily postponed in an attempt to induce Great Britain to abandon its guarantee to Poland, Hess publicly praised Hitlers "magnanimous offer" to Poland and attacked Poland for agitating for war and England and France for being responsible for Polands attitude. After the invasion of Poland, Hess signed decrees incorporating Danzig and certein Polish territories into the Reich and setting up the Government General (Poland).
These specific steps this defendant took in support of Hitlers plans for aggressive action do not indicate the full extent of his responsibility. Until his flight to England, Hess was Hitlers closest personal confidant. Their relationship was such that Hess must have been informed of Hitlers aggressive plans when they came into existence. And he took action to carry out these plans whenever action was necessary.
With him on his flight to England, Hess carried certain peace proposals which he alleged Hitler was prepared to accept. It is significant to note that his flight took place only 10 days after the date on which Hitler fixed 22 June, 1941, as the time for attacking the Soviet Union. In conversations carried on after his arrival in England, Hess wholeheartedly supported all Germanys aggressive actions up to that time and attempted to justify Germanys actions in connection with Austria, Czechoslovakia, Poland, Norway, Denmark, Belgium and the Netherlands. He blamed England and France for the war.

There is evidence showing the participation of the Party Chancellory, under Hess, in the distribution of orders connected with the Commission of War Crimes, that Hess may have had knowledge of, even if he did not participate in the crimes that were being committed in the East and proposed laws discriminating against Jews and Poles, and that he signed decrees forcing certain groups of Poles to accept German citizenship. The Tribunal, however, does not find that the evidence sufficiently connects Hess with these crimes to sustain a finding of guilt.
As previously indicated the Tribunal found, after a full medical examination of and report on the condition of this defendant, that he should be tried, without any postponement of his case. Since that time, further motions have been made that he should again be examined. These the Tribunal denied, after having had a report from the prison psychologist. That Hess acts in an abnormal manner, suffers from loss of memory and has mentally deteriorated during this Trial, may be true. But there is nothing to show that he does not realize the nature of the charges against him, or is incapable of defending himself. He was ably represented at the Trial by council, appointed for that purpose by the Tribunal. There is no suggestion that Hess was not completely sane when the acts, charged against him were committed.

crimes against humanity
Term that was introduced during the Nuremburg Trials. Crimes against humanity are inhuman treatment against civilian population and persecution on the basis of race or political or religious beliefs.
Führer
German word for leader. During his reign of power Adolf Hitler was Führer of Nazi Germany.
invasion
Armed incursion.
Jews
Middle Eastern people with own religion that lived in Palestine. They distinguished themselves by their strong monotheism and the strict observance of the Law and tradition. During World War 2 the Jewish people were ruthlessly persecuted and annihilated by the German Nazis. . An estimated 6,000,000 Jews were exterminated.
mobilization
To make an army ready for war, actually the transition from a state of peace to a state of war. The Dutch army was mobilized on the 29 August 1939.
Nazi
Abbreviation of a national socialist.
Putsch
Coup, often involving the use of violence.
Soviet Union
Soviet Russia, alternative name for the USSR.
War Crimes
Crimes committed in wartime. Often concerning crimes committed by soldiers against civilians. 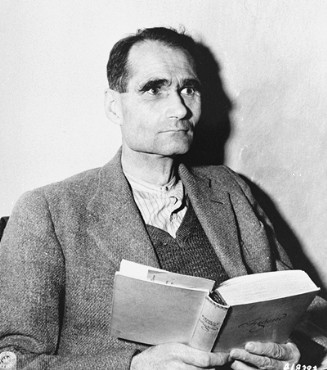