Von Ribbentrop is indicted on all four Counts of the Indictment (explanation). He joined the Nazi Party in 1932. By 1933, he had been made foreign policy adviser to Hitler and in the same year the representative of the Nazi Party on foreign poilicy. In 1934, he was appointed Delegate for Disarmament Questions and in 1935 Minister Plenipotentiary at Large, a capacity in which he negotiated the Anglo-German Naval Agreement in 1935 and the Anti-Comintern Pact in 1936. On 11 August 1936, he was appointed Ambassador to England. On 4 February 1938. he succeeded Von Neurath as Reichsminister for Foreign Affairs as part of the general reshuffle which accompanied the dismissal of Von Fritsch and Von Blomberg.

Von Ribbentrop was not present at the Hossbach conference held on 5 November 1937, but on 2 February 1938, while still Ambassador to England, he sent a memorandum to Hitler, indicating his opinion that a change in the status quo in the East in the German sense could only be carried out by force and suggesting methods to prevent England and France from intervening in a European war, fought to bring about such a change. When Von Ribbentrop became Foreign Minister, Hitler told him that Germany still had four problems to solve: Austria, Sudetenland, Memel and Danzig and mentioned the possibility of "some sort of show-down" or "military settlement" for their solution.
On 12 February 1938, Von Ribbentrop attended the conference between Hitler and Von Schuschnigg at which Hitler, by threats of invasion, forced Von Schuschnigg to grant a series of concessions designed to strengthen the Nazis in Austria, including the appointment of Seyss-Inquart as Minister of Security and Interior, with control over the Police. Von Ribbentrop was in London when the occupation of Austria was actually carried out and, on the basis of information supplied him by Göring, informed the British Government that Germany had not presented Austria with an ultimatum, but had intervened in Austria only to prevent civil war. On 13 March 1938, Von Ribbentrop signed the law incorporating Austria into the German Reich.
Von Ribbentrop participated in the aggressive plans against Czechoslovakia. Beginning in March 1938, he was in close touch with the Sudeten German Party and gave them instructions which had the effect of keeping the Sudeten German question a live issue which might serve as an excuse for the attack which German was planning against Czechoslovakia. In August 1938, he participated in a conference for the purpose of obtaining Hungarian support in the event of a war with Czechoslovakia. After the Munich Pact, he continued to bring diplomatic pressure with the object of occupying the remainder of Czechoslovakia. He was instrumental in inducing the Slovaks to proclaim their independence. He was present at the conference of 14 and 15 March 1939, at which Hitler, by threats of invasion, compelled President Hacha to consent to the German occupation of Czechoslovakia. After the German troops had marched in, Von Ribbentrop signed the law establishing a protectorate over Bohemia and Moravia.
Von Ribbentrop played a particularly significant role in the diplomatic activity which led up to the attack on Poland. He participated in a conference held on 12 August 1939, for the purpose of obtaining Italian support if the attack should lead to a general European war. Von Ribbentrop discussed the German demands with respect to Danzig and the Polish Corridor with the British Ambassador in the period between 25 and 30 August 1939 when he knew that the German plans to attack Poland had merely been temporarily postponed in an attempt to induce the British to abandon their guarantee to the Poles. The way in which he carried out these discussions makes it clear that he did not enter into them in good faith in an attempt to reach a settlement of the difficulties between Germany and Poland.
Von Ribbentrop was advised in advance of the attack on Norway and Denmark and of the attack on the Low Countries and prepared the official Foreign Office memoranda, attempting to justify these aggressive actions.
Von Ribbentrop attended the conference on 20 January 1941, at which Hitler and Mussolini discussed the proposed attack on Greece, and the conference in Janaury 1941, at which Hitler obtained permission from Antonescu for German troops to go through Romania for this attack. On 25 March 1941, when Yugoslavia adhered to the Axis Tri-Partite-Pact, Von Ribbentrop had assured Yugoslavia that Germany would respect its sovereignity and territorial integrity. On 27 March 1941, he attended the meeting held after the coup détat in Yugoslavia, at which plans were made to carry out Hitlers announced intention to destroy Yugoslavia.
Von Ribbentrop attended a conference in May 1941 with Hitler and Antonescu relating to Romanian participation in the attack on the U.S.S.R. He also consulted with Rosenberg in the preliminary planning for the political exploitation of the Soviet territories and in July 1941, after the outbreak of war, urged Japan to attack the Soviet Union.

Von Ribbentrop participated in a meeting of 6 June 1944, at which it was agreed to start a program under which Allied aviators carrying out machine gun attacks shoud be lynched. In December 1944, Von Ribbentrop was informed of the plans to murder one of the French generals held as a prisoner of war and directed his subordinates to see that the details were worked out in such a way as to prevent its detection by the protecting powers. Von Ribbentrop is also responible for War Crimes and Crimes against Humanity because of his activities with respect to occupied countries and Axis satellites. The top German official in both Denmark and Vichy France was a Foreign Office representative and Von Ribbentrop is therefore responsible for the general economic and political policies put into effect in the occupation of these countries. He urged the Italians to adopt a ruthless occupation policy in Yugoslavia and Greece.
He played an important part in Hitlers "final solution" of the Jewish question. In September 1942, he ordered the German diplomatic representatives accredited to various Axis satellites to hasten the deportation of Jews to the East. In June 1942, the German Ambassador to Vichy requested Laval to turn over 50.000 Jews for deportation to the East. On 25 February 1943, Von Ribbentrop protested to Mussolini against Italian slowness in deporting Jews from the Italian occupation zone of France. On 17 April 1943, he took part in a conference between Hitler and Horthy on the deportation of Jews from Hungary and informed Horthy that the "Jews must either be exterminated or taken to concentration camps". At the same conference, Hitler had likened the Jews to tubercolosis bacilli and said if they did not work they were to be shot.
Von Ribbentrops defence to the charges made against him is that Hitler made all the important decisions and that he was such a great admirer and faithful follower of Hitler that he never questioned Hitlers repeated assertions that he wanted peace or the truth of the reasons that Hitler gave in explaining aggressive action. The Tribunal does not consider this explanantion to be true. Von Ribbentrop participated in all of the Nazi aggressions from the occupation of Austria to the invasion of the Soviet Union. Although he was personally concerned with the diplomatic rather than the military aspect of these actions, his diplomatic actions were so closely connected with war that he could not have remained unaware of the aggressive nature of Hitlers actions. In the administration of territories over which Germany acquired control by illegal invasion, Von Ribbentrop also assisted in carrying out criminal policies, particularly those involving the extermination of the Jews. There is abundant evidence, moreover, that Von Ribbentrop was in complete sympathy with all the main tenets of the National Socialist creed and that his collaboration with Hitler and with other defendants in the commission of Crimes against Peace, War Crimes and Crimes against Humanity was wholehearted. It was because Hitlers policy and plans coincided with his own ideas that Von Ribbentrop so willingly served him to the end.

The Court finds the Defendant Von Ribbentrop guilty on all Counts of the Indictment.

collaboration
Cooperation of the people with the occupying forces, more generally spoken the term for individuals who cooperate with the occupying force is collaborator.
Crimes against Humanity
Term that was introduced during the Nuremburg Trials. Crimes against humanity are inhuman treatment against civilian population and persecution on the basis of race or political or religious beliefs.
invasion
Armed incursion.
Jews
Middle Eastern people with own religion that lived in Palestine. They distinguished themselves by their strong monotheism and the strict observance of the Law and tradition. During World War 2 the Jewish people were ruthlessly persecuted and annihilated by the German Nazis. . An estimated 6,000,000 Jews were exterminated.
machine gun
Machine gun, an automatic heavy quick firearm.
Nazi
Abbreviation of a national socialist.
Soviet Union
Soviet Russia, alternative name for the USSR.
War Crimes
Crimes committed in wartime. Often concerning crimes committed by soldiers against civilians. 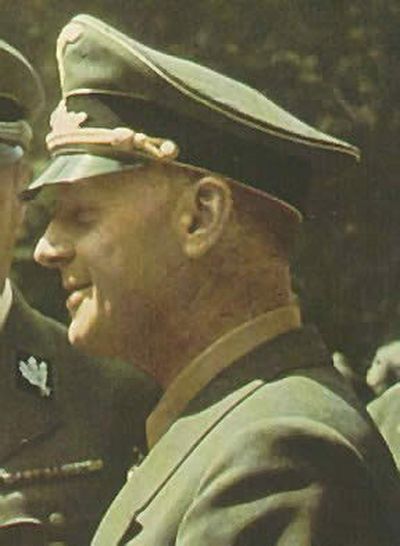