Keitel is indicted on all four Counts of the Indictment (explanation). He was Chief of Staff to the then Minister of War Von Blomberg from 1935 to 4 February 1938; on that day, Hitler took command of the Armed Forces, making Keitel Chief of the High Command of the Armed Forces. Keitel did not have command authority over the three Wehrmacht branches which enjoyed direct access to the Supreme Commander. O.K.W. was in effect Hitlers military staff.

Keitel attended the Von Schuschnigg conference in February 1938, with two other generals. Their presence, he admitted, was a "military demonstration" but since he had been appointed Chief of the O.K.W. just one week before, he had not known why he had been summoned. Hitler and Keitel then continued to put pressure on Austria with false rumors, broadcasts and troop manoeuvres. Keitel made the military and other arrangements and Jodls diary noted: "the effect is quick and strong". When Von Schuschnigg called his plebiscite, Keitel briefed Hitler and his generals that night and Hitler issued "Case Otto", which Keitel initiated.
On 21 April 1938, Hitler and Keitel considered making use of a possible "incident" such as the assassination of the German Minister at Prague to preface the attack on Czechoslovakia. Keitel signed many directives and memoranda on Case Green, including the directive of 30 May, containing Hitlers statement: "It is my unalterable decision to smash Czechoslovakia by military action in the near future". After Munich, Keitel initiated Hitlers directive for the attack on Czechoslovakia and issued two supplements. The second supplement said that the attack should appear to the outside world as "merely an act of pacification and not a warlike undertaking". The O.K.W. chief attended Hitlers negotiations with Hacha when the latter surrendered.
Keitel was present on 23 May 1939, when Hitler announced his decision "to attack Poland at the first suitable opportunity". Already he had signed the directive requiring the Wehrmach to submit its timetable for Case White to the O.K.W. by 1 May.
On 12 December 1939 he discussed the invasion of Norway and Denmark with Hitler, Jodl and Raeder. By directive of 27 Janaury 1940, the Norway plans were placed under Keitels "direct and personal guidance". Hitler had said on 23 May 1939 he would ignore the neutrality of Belgium and the Netherlands and Keitel signed orders for these attacks on 15 October, 20 and 28 November 1938. Orders postponing this attack 17 times until the spring of 1940 were all signed by Keitel or Jodl.
Formal plannnig for attacking Greece and Yugoslavia had begun in November 1940. On 18 March 1941, Keitel heard Hitler tell Raeder that complete occupation of Greece was a prerequisite to settlement and also heard Hitler decree on 27 March that the destruction of Yugoslavia should take place with "unmerciful harshness".
Keitel testified that he opposed the invasion of the Soviet Union for military reasons and also because it would constitute a violation of the Non-Aggression Pact. Nevertheless, he initiated Operation Barbarossa, signed by Hitler on 18 December 1940 and attended the O.K.W. discussion with Hitler on 3 February 1941. Keitels supplement of 12 March established the relationship between the military and the political officers. He issued his timetable for the invasion on 6 June 1941 and was present at the briefing on 14 June when the generals gave their final reports before the attack. He appointed Jodl and Warlimont as O.K.W. representatives to Rosenberg on matters concerning the Eastern territories. On 16 June he directed all Army units to carry out the economic directives issued by Göring in the so called Green Folder for the exploitation of Russian teritory, food and raw materials.

On 4 Augst 1942, Keitel issued a directive that paratroopers were to be turned over to the SD. On 18 October, Hitler issued the Commando Order which was carried out in several instances. After the landing in Normandy, Keitel reaffirmed the order and later extended it to Allied missions fighting with partisans. He admits he did not believe the order was legal but claims he could not stop Hitler.
When on 18 September 1941, O.K.W. issued its ruthless regulations for Soviet prisoners of war, Canaris wrote to Keitel that under international law, the SD should not have to do anything with this. On this memorandum, in Keitels handwriting and dated 23 September 1941, and initiated by him, is the statement: "The objections arise from the military concept of chivalrous warfare. This is the destruction of an ideology. Therefore I approve and back the measures". Keitel testified that he really agreed with Canaris and argued with Hitler but lost. The O.K.W. chief directed the military authorities to co-operate with the Einsatzstab Rosenberg in looting cultural property in occupied territories.
Lahousen testified that on 12 September 1939, while aboard Hitlers headquarters train, the Polish intelligentsia, nobility and Jews were to be liquidated. On 20 October, Hitler told Keitel the intelligentsia would be prevented from forming a ruling class, the standard of living would remain low and Poland would be used only for labor forces. Keitel does not remember the Lahousen conversation but admits there was such a policy and that he had protested to Hitler about it without effect.
On 16 September 1941, Keitel ordered that attacks on soldiers in the East should be met by putting 50 to 100 Communists to death for one German soldier, with the comment that human life was less than nothing in the East. On 1 October, he ordered military commanders always to have hostages to execute when German soldiers were attacked. When Terboven, the Reichskommissar in Norway, wrote Hitler that Keitels suggestion that workmens relatives be held responsible for sabotage, could work only if firing squads were authorized. Keitel wrote on this memorandum in the margin: "Yes, that is the best".
On 12 May 1941, five weeks before the invasion of the Soviet Union, the O.K.W. urged upon Hitler a directive of the O.K.H. (Oberkommando des Heeres, Supreme Command of the Army) that political Kommissars be liquidated by the Army. Keitel admitted the directive was passed on the field commanders and on 13 May, Keitel signed an order that civilians, suspected of offenses against troops shoud be shot without trial and that prosecution of German soldiers for offenses against civilians was unnecessary. On 27 July, all copies of this directive were ordered destroyed without affecting its validity. Four days previously,. he had signed another order that legal punishment was inadequate and troops should use terrorism.
On 7 December 1941, as already discussed in this opinion, the so-called "Nacht und Nebel" decree over Keitels signature, provided that in occupied territories civilians who had been accused of crimes of resistance against the army of occupation, would be tried only when a death sentence was likely, otherwise they would be handed over to the Gestapo for transportation to Germany.
Keitel directed that Russian prisoners of war be used in German war industry. On 8 September 1943, he ordered French, Dutch and Belgian citizens to work on the Atlantic Wall. He was present on 4 January 1944 when Hitler directed Sauckel to obtain 4 million new workers from occupied territories.
In the face of these documents, Keitel does not deny his connection with these acts. Rather, his defense relies on the fact that he is a soldier and on the doctrine of "superior orders", prohibited as a defense by Article 8 of the Charter.
There is nothing in mitigation. Superior orders, even to a soldier, cannot be considered in mitigation where crimes so shocking and extensive have been committed consciously, ruthlessly and without military excuse or justification.

crimes against humanity
Term that was introduced during the Nuremburg Trials. Crimes against humanity are inhuman treatment against civilian population and persecution on the basis of race or political or religious beliefs.
Gestapo
Geheime Staatspolizei. Secret state police, the secret police in the Third Reich.
ideology
A collection of principles and ideas of a certain system.
invasion
Armed incursion.
Jews
Middle Eastern people with own religion that lived in Palestine. They distinguished themselves by their strong monotheism and the strict observance of the Law and tradition. During World War 2 the Jewish people were ruthlessly persecuted and annihilated by the German Nazis. . An estimated 6,000,000 Jews were exterminated.
neutrality
Impartiality, absence of decided views, the state of not supporting or helping either side in a conflict.
Non-Aggression Pact
Agreement wherein parties pledge not to attack each other.
paratroopers
Airborne Division. Military specialized in parachute landings.
Reichskommissar
Title of amongst others Arthur Seyss-Inquart, the highest representative of the German authority during the occupation of The Netherlands.
resistance
Resistance against the enemy. Often also with armed resources.
Soviet Union
Soviet Russia, alternative name for the USSR.
war crimes
Crimes committed in wartime. Often concerning crimes committed by soldiers against civilians.
Wehrmacht
German armed military forces, divided in ground forces, air force and navy. 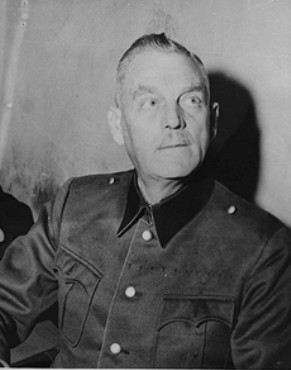 Defendant Wilhelm Keitel, former Chief of the O.K.W., in his cell in Nuremberg. Source: Wikimedia.