Kaltenbrunner is indicted under Counts One, Three, and Four(explanation). He joined the Austrian Nazi Party and the SS in 1932. In 1935 he became leader of the SS in Austria. After the Anschluss he was appointed Austrian State Secretary for Security and, when this position was abolished in 1941, he was made Higher SS and Police Leader. On 30 January 1943, he was appointed Chief of the Security Police and SD and head of the Reich Security Head Offlce (RSHA), a position which had been held by Heydrich until his assassination in June 1942. He held the rank of Obergruppenfiihrer in the SS.

As leader of the SS in Austria Kaltenbrunner was active in the Nazi intrigue against the Von Schuschnigg Government. On the night of 11 March 1938, after Göring had ordered Austrian National Socialists to seize control of the Austrian Government, 500 Austrian SS men under Kaltenbrunner's command surrounded the Federal Chancellery and a special detachment under the command of his adjutant entered the Federal Chancellery while Seyss-Inquart was negotiating with President Miklas. But there is no evidence connecting Kaltenbrunner with plans to wage aggressive war on any other front. The Anschluss, although it was an aggressive act, is not charged as an aggressive war, and the evidence against Kaltenbrunner under Count One does not, in the opinion of the Tribunal, show his direct participation in any plan to wage such a war

When he became Chief of the Security Police and SD and head of the RSHA on 30 January 1943, Kaltenbrunner took charge of an organization which included the main offices of the Gestapo, the SD, and the Criminal Police. As Chief of the RSHA, Kaltenbrunner had authority to order protective custody to and release from concentration camps. Orders to this effect were normally sent over his signature. Kaltenbrunner was aware of conditions in concentration camps. He had undoubtedly visited Mauthausen, and witnesses testified that he had seen prisoners killed by the various methods of executioin, hanging, shooting in the back of the neck, and gassing, as part of a demonstration. Kaltenbrunner himself ordered the execution of prisoners in those camps and his office was used to transmit to the camps execution orders which originated in Himmler's office. At the end of the war Kaltenbrunner participated in the arrangements for the evacuation of inmates of concentration camps, and the liquidation of many of them, to prevent them from being liberated biy the Allied armies.
During the period in which Kaltenbrunner was head of the RSHA, it was engaged in a widespread program of War Crimes and Crimes against Humanity. These crimes included the mistreatment and murder of prisoners of war. Einsatzkommandos operating under the control of the Gestapo were engaged in the screening of Soviet prisoners of war, Jews, Kommissars and others who were thought to be ideologically hostile to the Nazi system were reported to the RSHA which had them transferred to a concentration camp and murdered. An RSHA order issued during Kaltenbrunner's regime established the "Bullet Decree,'' under which certain escaped prisoners of war who were recaptured were taken to Mauthausen and shot. The order for the execution of Commando troops was extended by the Gestapo to include parachutists while Kaltenbrunner was chief of the RSHA. An order signed by Kaltenbrunner instructed the Police not to interfere with attacks on bailed-out Allied fliers. In December 1944 Kaltenbrunner participiated in the murder of one of the French generals held as prisoners of war.
During the period in which Kaltenbrunner was head of the RSHA, the Gestapo and SD in occupied territories continued the murder and ill-treatment of the population, using methods which included torture and confinement in concentration camps, usually under orders to which Kaltenbrunner's name was signed.
The Gestapo was responsible for enforcing a rigid labor discipline on the slave laborers and Kaltenbrunner established a series of labor reformatory camps for this purpose. When he had embarked on a slave labor program of his own, the Gestapo was used to obtain the needed workers by sending laborers to concentration camps.
The RSHA played a leading part in the ''final solution'' of the Jewish question by the extermination of the Jews. A special section under the Amt IV of the RSHA was established to supervise this program. Under its direction approximately 6 million Jews were murdered, of which 2 million were killed by Einsatzgruppen and other units oif the Security Police. Kaltenbrunner had been informed of the activities of these Einsatzgruppen when he was a Higher SS and Police Leader and they continued to function after he had become Chief of the RSHA.
The murder of approximately 4 million Jews in concention camps has heretofore been described. This part of the program was also under the supervision of the RSHA when Kaltenbrunner was head of that organization and special missions of the RSHA scoured the occupied territories and the various Axis satellites arranging for the deportation of Jews to these extermination institutions. Kaltenbrunner was informed of these activities. A letter which he wrote on 30 June 1944 described the shipment to Vienna of 12,000 Jews for that purpose and directed that all who could not work would have to be kept in readiness for "special action,'' which meant murder. Kaltenbrunner denied his signature to this letter, as he did on a very large number of orders on which his name was stamped or typed, and in a few instances, written. It is inconceivable that in matters of such importance his signature could have appeared so many times without his authority.
Kaltenbrunner has claimed that when he took office as Chief of the Security Police and SD and as head of the RSHA he did so pursuant to an understanding with Himmler under which he was to confine his activities to matters involving foreign intelligence and not to assume overall control over the activities of the RSHA. He claims that the criminal program had been started before his assumption of office; that he seldom knew what was going on and that when he was informed he did what he could to stop them. It is true that he showed a special interest in matters involving foreign intelligence. But he exercised control over the activities of the RSHA, was aware of the crimes it was committing, and was an active participant in many of them.

The Court finds that Kaltenbrunner is not guilty on Count One. He is guilty under Counts Three and Four

Commando troops
Special forces, deployed especially for missions behind enemy lines such as sabotage and reconnaissance.
concentration camp
Closed camp where people are being held captive that are considered to be anti- social, enemies of the state, criminal or unwanted individuals. These groups mostly do not get a fair trial or are condemned to doing time in a camp.
Crimes against Humanity
Term that was introduced during the Nuremburg Trials. Crimes against humanity are inhuman treatment against civilian population and persecution on the basis of race or political or religious beliefs.
front
Largest Soviet ground formation. It was attached to a certain area which gave its name to the units involved. For instance the Voronezh front.
Gestapo
Geheime Staatspolizei. Secret state police, the secret police in the Third Reich.
Jews
Middle Eastern people with own religion that lived in Palestine. They distinguished themselves by their strong monotheism and the strict observance of the Law and tradition. During World War 2 the Jewish people were ruthlessly persecuted and annihilated by the German Nazis. . An estimated 6,000,000 Jews were exterminated.
Mauthausen
Place in Austria where the Nazis established a concentration camp from 1938 to 1945.
Nazi
Abbreviation of a national socialist.
RSHA
Reichssicherheitshauptamt. The central information and security service of the Third Reich.
War Crimes
Crimes committed in wartime. Often concerning crimes committed by soldiers against civilians. 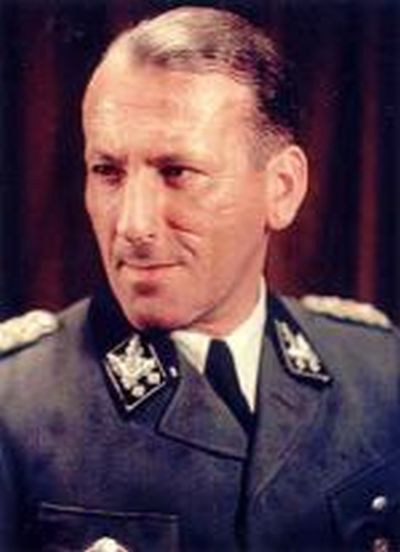