Frick is indicted on all four Counts (explanation). Recognized as the chief Nazi administrative specialist and bureaucrat, he was appointed Reichsminister of the Interior in Hitler's first cabinet. He retained this important position until August 1943, when he was appointed Reichsprotektor of Bohemia and Moravia. In connection with his duties at the center of all internal and domestic administration, he became the Prussian Minister of the Interior, Reichsdirektor of Elections, General Plenipotentiary for the Administration of the Reich and a member of the Reichsverteidigungsrat, the Ministerial Council for Defense of the Reich and the "Three Man College". As the several countries incorporated into the Reich were overrun, he was placed at the head of the central offices for their incorporation.
Though Frick did not officially join the Nazi Party until 1925, he had previously allied himself with Hitler and the Nationalsocialist cause during the Munich Putsch, while he was an official in the Munich Police Department. Elected to the Reichstag in 1924, he became a Reichsleiter as leader of the Nationalsocialist faction in that body.

An avid Nazi, Frick was largely responsible for bringing the German nation under the complete control of the N.S.D.A.P. After Hitler became Reichskanzler, the new Minister of the Interior immediately began to incorporate local governments under the sovereignity of the Reich. The numerous laws he drafted, signed and administered, abolished all opposition parties and prepared the way for the Gestapo and their concentration camps to extinguish all individual opposition. He was largely responsible for the legislation which suppressed the trade unions, the Church and the Jews. He performed this task with ruthless efficiency.
Before the date of the Austrian aggression Frick was concerned only with domestic administration within the Reich. The evidence does not show that he participated in any of the conferences at which Hitler outlined his aggressive intentions. Consequently the Tribunal takes the view that Frick was not a member of the common plan or conspiracy to wage aggressive war as defined in this Judgment.
Six months after the seizure of Austria, under the provision of the Reichsverteidigungsgesetz of 4 September 1938, Frick became General Plenipotentiary for the Administration of the Reich. He was made responsible for war administration, except the military and economic, in the event of Hitler's proclaiming a state of defense. The Reichsministeriums of Justice, Education, Religion, and the Office of Spatial Planning were made subordinate to him. Performing his allotted duties, Frick devised an administrative organization in accordance with wartime standards. According to his own statement, this was actually put into operation after Germany decided to adopt a policy of war.
Frick signed the law of 13 March 1938, which united Austria with the Reich and he was made responsible for its accomplishment. In setting up German administration in Austria, he issued decrees which introduced German law, the Nuremberg Decrees, the Military Service Law, and he provided for police security by Himmler.
He also signed the laws incorporating into the Reich the Sudetenland, Memel, Danzig, the Eastern territories (West Prussia and Posen) and Eupen, Malmédy and Moresnet. He was placed in charge of the actual incorporation and of the establishment of German administration over these territories. He signed the law establishing the Protectorate of Bohemia and Moravia.
As the head of the central offices for Bohemia and Moravia, the Government General, and Norway, he was charged with obtaining close co-operation between the German officials in these occupied countries and the supreme authorities of the Reich. He supplied German civil servants for the administrations in all occupied territories, advising Rosenberg as to their assignment in the Occupied Eastern Territories. He signed the laws appointing Terboven Reichskommissar to Norway and Seyss-Inquart to Holland.

War Crimes and Crimes against Humanity

Always rabidly anti-Semitic, Frick drafted, signed, and administered many laws designed to eliminate Jews from German life and economy. His work formed the basis of the Nuremberg Decrees and he was active in enforcing them. Responsible for prohibiting Jews from following various professions and for confiscating their property, he signed a final decree in 1943, after the mass destruction of Jews in the East, which placed them outside the law and handed them over to the Gestapo. These Iaws paved the way for the "Final Solution", and were extended by Frick to the incorporated territories and to certain of the occupied territories. While he was Reichsprotektor of Bohemia and Moravia, thousands of Jews were transferred from the Terezin ghetto in Czechoslovakia to Auschwitz where they were killed. He issued a decree providing for special penal laws against Jews and Poles in the Government General.
The Police officially fell under the jurisdiction of the Reichsinnenminister but Frick actually exercised little control over Himmler and police matters. However, he signed the law appointing Himmler Chief of the German Police, as well as the decrees establishing Gestapo jurisdiction over concentration camps and regulating the execution of orders for protective custody. From the many complaints he received, and from the testimony of witnesses, the Tribunal concludes that he knew of atrocities committed in these camps. With knowledge of Himmler's methods, Frick signed decrees authorizing him to take necessary security measures in certain of the incorporated territories. What these security measures turned out to be has already been dealt with.
As the supreme Reichs authority in Bohemia and Moravia, Frick bears general responsibility for the acts of oppression in that territory after 20 August 1943, such as terrorising the population, slave labor, and the deportation of Jews to the concentration camps for extermination. It is true that Frick's duties as Reichsprotektor were considerably more limited than those of his predecessor and that he had no legislative and limited personal executive authority in the Protectorate. Nevertheless, Frick knew full well what the Nazi policies of occupation were in Europe, particularly with respect to Jews, at that time, and by accepting the office of Reichsprotektor he assumed responsibility for carrying out those policies in Bohemia and Moravia.
German citizenship in the occuplied countries as well as in the Reich came under his jurisdiction while he was Minister of the Interior. Having created a racial register of persons of German origin, Frick conferred German citizenship on certain groups of citizens of foreign countries. He is responsible for Germanization in Austria, Sudetenland, Memel, Danzig, Eastern Territories (West Prussia and Posen) and in the territories of Eupen, Malmédy, and Moresnet. He forced on the citizens of these territories German law, German courts, German education, German police security, and compulsory military service.
During the war nursing homes, hospitals and asylums in which euthanasia was practiced as described elsewhere in this Judgment, came under Frick's jurisdiction. He had knowledge that insane, sick and aged people, "useless eaters,'' were being systematically put to death. Complaints of these murders reached him, but he did nothing to stop them. A report of the Czechoslovak War Crimes Commission estimated that 275,000 mentally deficient and aged people, for whose welfare he was responsible, fell victim to it.

> The Court finds that Frick is not guitly on Count One. He is guilty on Counts Two, Three and Four

crimes against humanity
Term that was introduced during the Nuremburg Trials. Crimes against humanity are inhuman treatment against civilian population and persecution on the basis of race or political or religious beliefs.
Gestapo
Geheime Staatspolizei. Secret state police, the secret police in the Third Reich.
ghetto
Part of a town separated from the outside world to segregate Jewish population. The establishment of ghettos was intended to exclude the Jews from daily life and from the rest of the people. From these ghettos it was also easier to deport the Jews to the concentration and extermination camps. Also known as Judenviertel or Jewish quarter.
Jews
Middle Eastern people with own religion that lived in Palestine. They distinguished themselves by their strong monotheism and the strict observance of the Law and tradition. During World War 2 the Jewish people were ruthlessly persecuted and annihilated by the German Nazis. . An estimated 6,000,000 Jews were exterminated.
Nazi
Abbreviation of a national socialist.
Putsch
Coup, often involving the use of violence.
Reichskommissar
Title of amongst others Arthur Seyss-Inquart, the highest representative of the German authority during the occupation of The Netherlands.
War Crimes
Crimes committed in wartime. Often concerning crimes committed by soldiers against civilians. 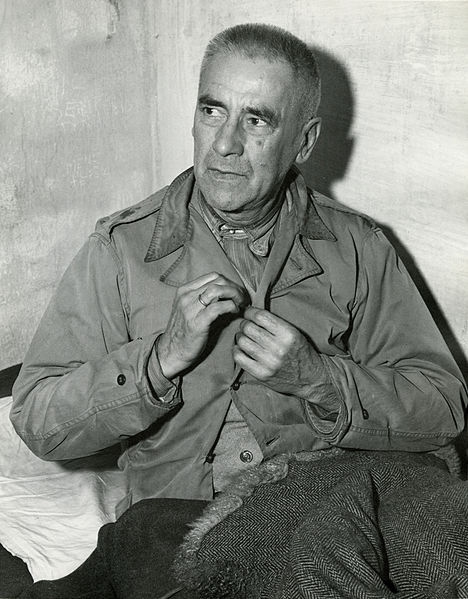