Streicher is indicted on Counts One and Four (explanation). One of the earliest members of the Nazi Party, joining in 1921, he took part in the Munich Putsch. From 1925 to 1940 he was Gauleiter of Franconia. Elected to the Reichstag in 1933, he was an honorary general in the SA. His persecution of the Jews was notorious. He was the pubilisher of Der Stürmer, an anti-Semitic weekly newspaper, from 1923 to 1945 and was its editor until 1933.

Streicher was a staunch Nazi and supporter of Hitler's main policies. There is no evidence to show that he was ever within Hitler's inner circle of advisers; nor during his career was he closely connected with the formulation of the policies which Ied to war. He was never present, for example, at any of the important conferences when Hitler explained his decisions to his leaders. Although he was a Gauleiter there is no evidence to prove that he had knowledge of these policies. In the opinion of the Tribunal the evidence fails to establish his connection with the conspiracy or common plan to wage aggressive war as that conspiracy has been elsewhere defined in this Judgment.

For his 25 years of speaking. writing, and preaching hatred of the Jews, Streicher was widely known as "Jew-Baiter Number One". In his speeches and articles, week after week, month after month, he infected the German mind with the virus of anti-Semitism and incited the German people to active persecution. Each issue of Der Stürmer, which reached a circulation of 600,000 in 1935, was filled with such articles, often lewd and disgusting.
Streicher had charge of the Jewish boycott of 1 April 1933. He advocated the Nuremberg Decrees of 1935. He was responsible for the demolition on 10 August 1938 of the synagogue in Nuremberg. And on 10 November 1938, he spoke publicly in support of the Jewish pogrom which was taking place at that time.
But it was not only in Germany that this defendant advocated his doctrines. As early as 1938 he began to call for the annihilation of the Jewish race. 23 different articles of Der Stürmer between 1938 and 1941 were produced in evidence, in which extermination "root and branch'' was preached. Typical of his teachings was a leading article in September 1938 which termed the Jew a germ and a pest, not a human being, but "a parasite, an enemy, an evil-doer, a disseminator of diseases who must be destroyed in the interest of mankind". Other articles urged that only when world Jewry had been annihilated would the Jewish problem have been solved, and predicted that 50 years hence the Jewish graves "will proclaim that this people of murderers and criminals has after all met its deserved fate". Streicher, in February 1940, published a letter from one of Der Stürmer's readers which compared Jews with swarms of locusts which must be exterminated completely. Such was the poison Streicher injected into the minds of thousands of Germans which caused them to follow the Nationalsocialist policy of Jewish persecution and extermination. A leading article of Der Stürmer, in May 1939, shows clearly his aim: "A punitive expedition must come against the Jews in Russia. A punitive expedition which will provide the same fate for them that every murderer and criminal must expect. Death sentence and execution. The Jews in Russia must be killed. They must be exterminated root and branch".
As the war in the early stages proved successful in acquiring more and more territory for the Reich, Streicher even intensified his efforts to incite the Germans against the Jews. In the record are 26 articles from Der Stürmer, published between August 1941 and September 1944, 12 by Streicher's own hand, which demanded annihilation and extermination in unequivocal terms. He wrote and published on 25 December 1941: "If the danger of the reproduction of that curse of God in the Jewish blood is finally to come to an end, then there is only one way - the extermination of that people whose father is the devi1"
And in February 1944 his own article stated: "Whoever does what a Jew does is a scoundrel, a criminal and he who repeats and wishes to copy him deserves the same fate: annihilation, death"
With knowledge of the extermination of the Jews in the Occupied Eastern Territories, this defendant continued to write and publish his propaganda of death. Testifying in this Trial, he vehemently denied any knowledge of mass executions of Jews but the evidence makes it clear that he continually received current information on the progress of the "final solution.'' His press photographer was sent to visit the ghettos of the East in the spring of 1943, the time of the destruction of the Warsaw ghetto. The Jewish newspaper, Israelitisches Wochenblatt, which Streicher received and read, carried in each issue accounts of Jewish atrocities in the East, and gave figures on the number of Jews who had been deported and killed. For example, issues appearing in the summer and fall of 1942 reported the death of 72,729 Jews in Warsaw, 17,542 in Lodz, 18,000 in Croatia, 125,000 in Romania, 14,000 in Latvia, 85,000 in Yugoslavia, 700,000 in all of Poland. In November 1943 Streicher quoted verbatim an article from the Israelitisches Wochenblatt which stated that the Jews had virtually disappeared from Europe and commented: "This is not a Jewish lie". In December 1942, referring to an article in the London Times about the atrocities aiming at extermination, Streicher said that Hitler had given warning that the second World War would lead to the destruction of Jewry. In January 1943 he wrote and published an article which said that Hitler's prophecy was being fulfilled, that world Jewry was being extirpated and that it was wonderful to know that Hitler was freeing the world of its Jewish tormentors.
In the face of the evidence before the Tribunal it is idle for Streicher to suggest that the solution of the Jewish problem which he favored was strictly limited to the classificatioh of Jews as aliens and the passing of discriminatory legislation such as the Nuremberg Laws, supplemented if possible by international agreement on the creation of a Jewish state somewhere in the world, to which all Jews should emigrate.
Streicher's incitement to murder and extermination at the time when Jews in the East were being killed under the most horrible conditions clearly constitutes persecution on political and racial grounds in connectioin with War Crimes, as defined by the Charter and constitutes a Crime against Humanity. 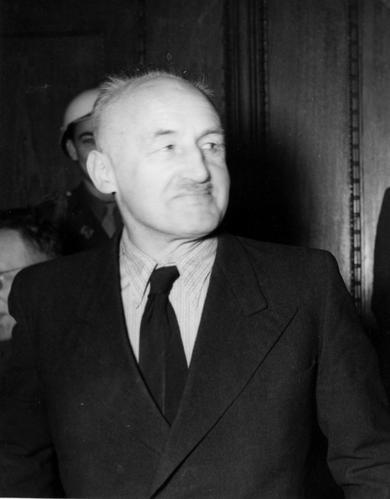