THE PRESIDENT: I call upon the Defendant Walter Funk.

WALTER FUNK (Defendant): In the days of my nation's greatest need I joined a political movement, the aim of which was the struggle for the freedom and honor of my fatherland and for a true social community of the people.
This movement received the leadership of the State in a legal way. I served this State by virtue of my duty as a civil servant, engaged in the execution of the German laws. I felt myself to a high degree bound to perform this duty at a time when there was danger of war and during the war itself, when the existence of the fatherland was threatened in the extreme.
But in war the state is absolutely dependent on the loyalty and faithfulness of its officials.
Now, horrible crimes have become known here, in which the offices under my direction were partly involved.
I learned this here in court for the first time. I did not know of these crimes, and I could not have known them.
These criminal deeds fill me, like every German, with deep shame. I have examined my conscience and memory with the utmost care, and I have told the Court frankly and honestly everything that I knew and have concealed nothing. As far as the deposits of the SS in the Reichsbank are concerned, I only acted in performance of the official duties incumbent on me as President of the Reichsbank. According to law, the acceptance of gold and foreign currency was one of the business tasks of the Reichsbank. The fact that the confiscation of these assets was taking place through the SS agencies subordinate to Himmler could not arouse any suspicion in me. The entire police system, the border control and especially the search for foreign currency in the Reich and in all occupied areas were under Himmler, but I was equally deceived and imposed upon by Himmler.
Until the time of this Trial, I did not know and did not suspect that among the assets delivered to the Reichsbank there were enormous quantities of pearls, precious stones, jewelry, gold objects and even spectacle frames and, horrible to say, gold teeth. That was never reported to me and I never noticed it either. I never saw these things. But until this Trial I also knew nothing of the fact that millions of Jews were murdered in concentration camps or by the Einsatzkommandos in the East. Never did a single person say even one word to me about these things.
The existence of extermination camps of this kind was totally unknown to me. I did not know a single one of these names. I have never set foot in a concentration camp either.
I, too, assumed that some of the gold and foreign currency which was deposited in the Reichsbank came from concentration camps and I frankly stated this fact from the beginning in all of my interrogations. But according to German law everyone was obliged to deliver these assets.
Apart from that, the kind and quantity of these shipments from the SS were never made known to me. But how was I even to suspect that the SS had acquired these assets by desecrating corpses?
If I had known of these horrible circumstances, my Reichsbank would never have accepted these assets for storage and conversion into money. I would have refused, even risking the danger that it might have cost me my head. If I had known of these crimes, Your Honors, I would not be sitting in the defendant's dock today, you may be convinced of that. In that case, the grave would have been better for me than this tormented life, this life full of suspicions, slanders, and vulgar accusations.
Not a single human being has ever lost his life because of any measures decreed by me. I have always respected the property of others. I have always tried to help people in need and, as far as it lay within my power, to bring happiness and joy into their lives. And for that, many will be grateful to me and remain grateful.
Hurnan life consists of error and guilt.
I too, have made many mistakes; I too, have let myself be deceived in many things and I frankly acknowledge. I admit, that I have let myself be deceived all too easily and in many ways have been too unconcerned and too gullible. There in I see my guilt, but I consider myself free from any criminal guilt which I am supposed to have incurred in discharging my official duties. In that respect, my conscience is just as clear today as on the day when I entered this courtroom 10 months ago for the first time.

concentration camp
Closed camp where people are being held captive that are considered to be anti- social, enemies of the state, criminal or unwanted individuals. These groups mostly do not get a fair trial or are condemned to doing time in a camp.
Jews
Middle Eastern people with own religion that lived in Palestine. They distinguished themselves by their strong monotheism and the strict observance of the Law and tradition. During World War 2 the Jewish people were ruthlessly persecuted and annihilated by the German Nazis. . An estimated 6,000,000 Jews were exterminated. 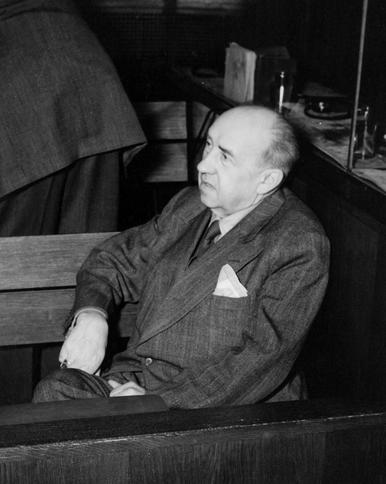