Sauckel is indicted under all four Counts. (explanation). Sauckel joined the Nazi Party in 1923, and became Gauleiter of Thuringia in 1927. He was a member of the Thuringian legislature from 1927 to 1933, was appointed Reichsstatthalter for Thuringia in 1932 and Thuringian Minister of the Interior and head of the Thuringian State Ministry in May 1933. He became a member of the Reichstag in 1933. He held the formal rank of Obergruppenführer in both the SA and the SS.

On 21 March 1942, Hitler appointed Sauckel Plenipotentiary General for the Allocation of Labor, with authority to put under uniform control "the utilization of all available manpower, including that of workers recruited abroad and of prisoners of war." Sauckel was instructed to operate within the fabric of the Four Year Plan and on 27 March 1942, Göring issued a decree as Delegate for the Four Year Plan transferring his manpower sections to Sauckel. On 30 September 1942, Hitler gave Sauckel authority to appoint commissioners in the various occupied territories and "to take all necessary measures for the enforcement of the decree of 21 March 1942".
Under the authority which he obtained by these decrees, Sauckel set up a program for the mobilization of the labor resources available to the Reich. One of the important parts of this mobilization was the systematic exploitation by force, of the labor resources of the occupied territories. Shortly after Sauckel had taken office, he had the governing authorities in the various occupied territories issue decrees establishing compulsory labor service in Germany. Under the authority of these decrees Sauckel's commissioners, backed up by the police authorities of the occupied territories, obtained and sent to Germany the laborers which were necessary to fill the quotas given them by Sauckel. He described so called "voluntary'' recruiting by "a whole batch of male and female agents just as was done in the olden times for shanghaiing". That real voluntary recruiting was the exception rather than the rule is shown by Sauckel's statement on 1 March 1944, that "out of five million foreign workers who arrived in Germany, not even 200,000 came voluntarily". Although he now claims that the statement is not true, the circumstances under which it was made, as well as the evidence presented before the Tribunal, leave no doubt that it was substantially accurate.
The manner in which the unfortunate slave laborers were collected and transported to Germany and what happened to them after they arrived, has already been described. Sauckel argues that he is not responsible for these excesses in the administration of the program. He says that the totaI number of workers to be obtained was set by the demands from agriculture and from industry; that obtaining the workers was the responsibility of the occupation authorities, transporting them to Germany that of the German railways and taking care of them in Germany that of the Ministries of Labor and Agriculture, the German Labor Front and the various industries involved. He testifies that insofar as he had any authority he was constantly urging humane treatment.
There is no doubt however, that Sauckel had over-all responsibility for the slave labor program. At the time of the events in question he did not fail to assert control over the fields which he now claims were the sole responsibility of others. His regulations provided that his commissioners should have authority for obtaining labor and he was constantly in the field supervising the steps which were being taken. He was aware of ruthless methods being taken to obtain laborers and vigorously supported them on the ground that they were necessary to fill the quotas.
Sauckel's regulations also provided that he had responsibility for transporting the laborers to Germany, allocating them to employers and taking care of them and that the other agencies involved in these procedures were subordinate to him. He was informed of the bad conditions which existed. It does not appear that he advocated brutality for its own sake, or was an advocate of any program such as Himmler's plan for extermination through work. His attitude was thus expressed in a regulation: "All the men must be fed, sheltered and treated in such a way as to exploit them to the highest possible extent at the lowest conceivable degree of expenditure". The evidence shows that Sauckel was in charge of a program which involved deportation for slave labor of more than 5,000,000 human beings, many of them under terrible conditions of cruelty and suffering.

The Tribunal finds that Sauckel is not guilty on Counts One and Two. He is guilty under Counts Three and Four.

crimes against humanity
Term that was introduced during the Nuremburg Trials. Crimes against humanity are inhuman treatment against civilian population and persecution on the basis of race or political or religious beliefs.
Four Year Plan
A German economic plan focussing at all sectors of the economy whereby established production goals had to be achieved in four years time.
Front
Largest Soviet ground formation. It was attached to a certain area which gave its name to the units involved. For instance the Voronezh front.
Gauleiter
Leader and representative of the NSDAP of a Gau.
mobilization
To make an army ready for war, actually the transition from a state of peace to a state of war. The Dutch army was mobilized on the 29 August 1939.
Nazi
Abbreviation of a national socialist.
war crimes
Crimes committed in wartime. Often concerning crimes committed by soldiers against civilians. 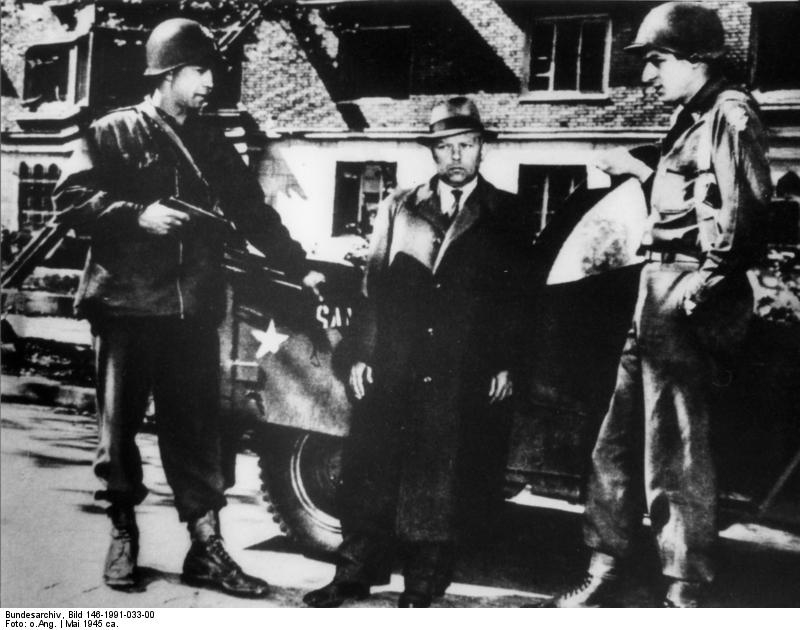