Bormann is indicted on Counts One, Three and Four.(explanation). He joined the Nationalsocialist Party in 1925, was a member of the Staff of the Supreme Command of the SA from 1928 to 1930, was in charge of the Aid Fund of the Party and was Reichsleiter from 1933 to 1945. From 1933 to 1941, he was Chief of Staff in the office of the Führers Deputy and after the flight of Hess to England, he became head of the Party Chancellory on 13 May 1941. On 12 April 1943 he became Secretary to the Führer. He was political and organizational head of the Volkssturm and a general in the SS.

Bormann, in the beginnnig a minor Nazi, steadily rose to a position of power and, particularly in the closing days, of great influence over Hitler. He was active in the Partys rise to power and even more so in the consolidation of that power. He devoted much of his time to the persecution of the Churches and of the Jews within Germany.
The evidence does not show that Bormann knew of Hitlers plan to prepare, initiate or wage aggressive wars. He attended none of the important conferences when Hitler revealed these plans for aggression piece by piece. It was only when he became head of the Party Chancellory in 1941 and later, in 1943, Secretary to the Führer when he attended many of Hitlers conferences, that his positions gave him the necessary access. Under the view stated elsewhere, which the Tribunal has taken of the conspiracy to wage aggressive war, there is no sufficient evidence to bring Bormann within the scope of Count One.

By decree of 29 May 1941, Bormann took over the offices and power held by Hess; by decree of 24 January 1942, these powers were extended to give him control over all laws and directives issued by Hitler. He was thus responsible for laws and orders issued thereafter. On 1 December 1942, all Gaue became Reich defense districts and the Party Gauleiter responsible to Bormann were apponted Reich Defense Commissioners. In effect, this made them the administrators of the entire civilian war effort. This was so not only in Germany, but also in those territories which were incorporated into the Reich from the absorbed and conquered territories.
Through this mechanism Bormann controlled the ruthless explotation of the subjected populace. His order of 12 August 1942 placed all Party agencies at the disposal of Himmler's program for forced resettlement and denationalization of persons in the occupied countries. Three weeks after the invasion of Russia, he attended the conference of 16 July 1941 at Hitler's field quarters with Göring, Rosenberg and Keitel; Bormann's report shows that there were discussed and developed detailed plans of enslavement and annihilation of the population of these territories. And on 8 May 1942 he conferred with Hitler and Rosenberg on the forced resettlement of Dutch personell in Liatvia, the extermination program in Russia and the economic explotation of the Eastern territories. He was interested in the confiscation of art and other properties in the East. His letter of 11 January 1944 called for the creation of a large scale organization to withdraw commodities from the occupied territories for the bombed-out German populace.
Bormann was extremely active in the persecution of the Jews, not only in Germany but also in the absorbed or conquered countries. He took part in the discussions which led to the removal of 60,000 Jews from Vienna to Poland in co-operation with the SS and the Gestapo. He signed the decree of 31 May 1941 extending the Nuremberg Laws to the annexed Eastern territories. In an order of 9 October 1942 he declared that the permanent elimination of Jews in Greater German territory could no longer be solved by emigration, but only by applying "ruthless force" in the special camps in the East. On 1 July 1943 he signed an ordinance withdrawing Jews from the protection of the law courts and placing them under the exclusive jurisdiction of Himmler's Gestapo.
Bormann was prominent in the slave labor program. The Party leaders supervised slave labor matters in the respective Gaue, including employment, conditions of work, feeding, and housing. By his circular of 5 May 1943 to the Leadership Corps, distributed down to the level of Ortsgruppenleiter, he issued directions regulating the treatment of foreign workers, ponting out they were subject to SS control on security problems and ordered the previous mistreatment to cease. A report of 4 September 1942 relating to the transfer of 500,000 female domestic workers from the East to Germany showed that control was to be exercised by Sauckel, Himmler and Bormann. Sauckel, by decree of 8 September directed the Kreisleiter to supervise the distribution and assignment of these female laborers.
Bormann also issued a series of orders to the Party leaders dealing with the treatment of prisoners of war. On 5 November he prohibited decent burials for Russian prisoners of war. On 25 November 1943, he directed Gauleiter to report cases of lenient treatment of prisoners of war and on 13 September 1944, he ordered liaison between the Kreisleiter and the camp commanders in determining the use to be made of prisoners of war for forced labor. On 29 Janaury 1943, he transmitted to his leaders O.K.W. instructions allowing the use of fire arms and corporal punishment on recaptured prisoners of war, contrary to the rules of land warfare. On 30 September 1944, he signed a decree taking jurisdiction over prisoners of war away from the O.K.W. and handing them over to Himmler and the SS.
Bormann is responsible for the lynching of Allied airmen. On 30 May 1944, he prohibited any police action or criminal proceedings against persons who had taken part in the lynching of Allied fliers. This was accompanied by a Goebbels propaganda campaign, inciting German people to take action of this nature and the conference of 6 June 1944 where regulations for the application of lynching were discussed.
His counsel, who has labored under difficulties, was unable to refute this evidence. In the face of these documents, which bear Bormanns signature, it is difficult to see how he could do so, even if the defendant were present. Counsel has argued that Bormann is dead and that the Tribunal should not avail itself of Article 12 of the Charter which gives it the right to take proceedings in absentia but the evidence of death is not conclusive and the Tribunal, as previously stated, determined to try him in absentia. If Bormann is not dead and is later apprehended, the Control Council for Germany may, under Article 29 of the Charter, consider any facts in mitigation and alter or reduce his sentence if deemed proper.

crimes against humanity
Term that was introduced during the Nuremburg Trials. Crimes against humanity are inhuman treatment against civilian population and persecution on the basis of race or political or religious beliefs.
Führer
German word for leader. During his reign of power Adolf Hitler was Führer of Nazi Germany.
Gauleiter
Leader and representative of the NSDAP of a Gau.
Gestapo
Geheime Staatspolizei. Secret state police, the secret police in the Third Reich.
invasion
Armed incursion.
Jews
Middle Eastern people with own religion that lived in Palestine. They distinguished themselves by their strong monotheism and the strict observance of the Law and tradition. During World War 2 the Jewish people were ruthlessly persecuted and annihilated by the German Nazis. . An estimated 6,000,000 Jews were exterminated.
Nazi
Abbreviation of a national socialist.
propaganda
Often misleading information used to gain support among supporters or to gain support. Often used to accomplish ideas and political goals.
war crimes
Crimes committed in wartime. Often concerning crimes committed by soldiers against civilians. 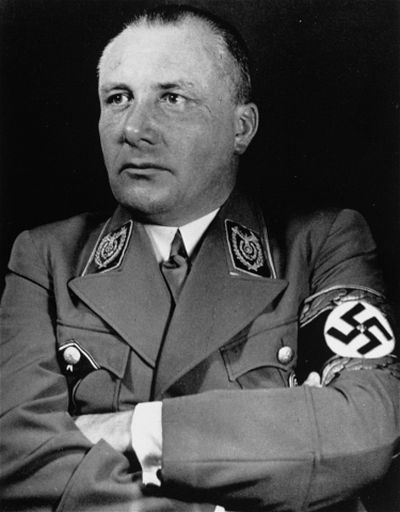 Martin Bormann was sentenced to death in absentia Source: NARA.