The speech that follows was delivered on radio by Vyacheslav M. Molotov in his capacity as vice-chairman of the Council of Peoples Commisioners (ministerial council) and Peoples Commissioner for Foreign Affairs on occasion of the German invasion, Operation Barbarossa. In the large cities, the speech could be heard through loudspeakers in the streets. Molotovs closing sentence in particular became famous and frequently returned on propaganda posters and such.

Citizens of the Soviet Union.

The Soviet government and its head, comrade Stalin, have ordered me to make the following announcement:

Today, at 4 oclock in the morning, German troops have entered our country, without making any demands on the Soviet Union and without a declaration of war. They have attacked our borders in many places and have subjected our towns - Zhitomir, Kiev, Sevastopol, Kaunas and some others - to aerial bombardments during which more than 200 people have been killed or wounded. Hostile aerial attacks and artillery barrages have also taken place on Romanian and Finnish territory.

Only after the attack was launched, the German Ambassador in Moscow, Von der Schulenburg, informed me as Peoples Commissioner of Foreign Afairs at 5:30 in the morning on behalf of his government of the fact that the German government has decided to go to war against the U.S.S.R. because of the concentration of Red Army units near the German eastern frontier.

Ordered by the government of the Soviet Union, I must also state that our troops and aircraft have not violated the border anywhere and that the announcement, to the effect that Soviet aircraft have allegedly fired at Romanian airfields, which was transmitted on Romanian radio this morning, is an outright lie and a provocation. A similar lie and provocation is Hitlers statement of today in which he attempted to fabricate incriminating evidence as to the non-observance of the Soviet-German treaty by the Soviet Union in the past.

Now that the attack on the Soviet Union has been launched, the Soviet government has ordered our troops to repulse the raid and to drive the German forces off the territory of our homeland. This war has not been forced on us by the German population, nor by the German workers, farmers and the intelligentsia, whose suffering we understand very well but by a clique of blood thirsty, Fascist German rulers who have suppressed the French, Czechs, Poles, Serbs, Norwegians, Belgians, Danish, Dutch, Greeks and other peoples.

The government of the Soviet Union is unshakeably convinced that our courageous army and navy and the gallant falcons of the Soviet air force shall do their duty towards their motherland and the Soviet people in an honourable fashion and deliver a crushing blow to the aggressor.

It is not the first time that our people face an arrogant aggressor. During Napoleons Russian campaign, our people reacted with the War of the Fatherland; Napoleon suffered a defeat and went down. That shall also happen to the arrogant Hitler who has unleashed a new campaign against our country. The Red Army and our population shall once more wage a triumphant War of the Fatherland for our homeland, for honour and for freedom.

The government of the Soviet Union is firmly convinced that the entire population of our nation, all workers, farmers and the intelligentsia, men and woman, shall meet their obligations and devote themselves to their work with the necessary conviction. Our entire population must now be staunch and unified as never before. Each of us must demand discipline, order and self sacrifice from themselves and others, worthy of a real Soviet Patriot, in order to attend to all needs of the Red Army, the navy and the air force in order to guarantee victory over the enemy.

The government calls on you, citizens of the Soviet Union, to close the ranks around our triumphant Bolshevist party, around our Soviet governemnt and around our great leader, comrade Stalin even further.

Our cause is just. The enemy shall be defeated. Victory shall be ours. 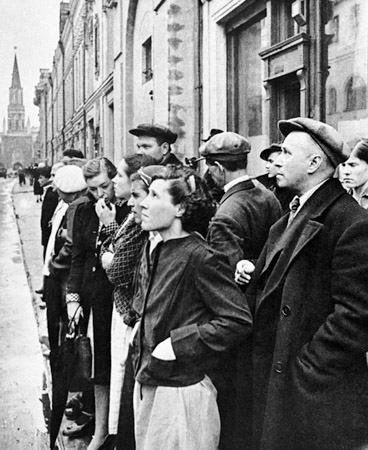 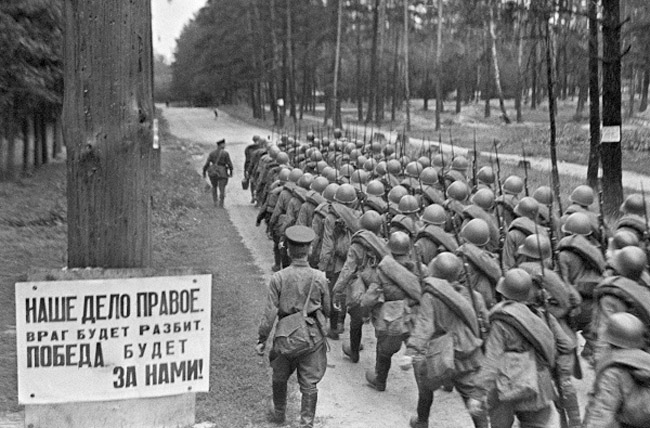 A column of soldiers near Moscow, 23rd of June 1941. On the placard on the left, the last sentence of Molotovs speech can be read. 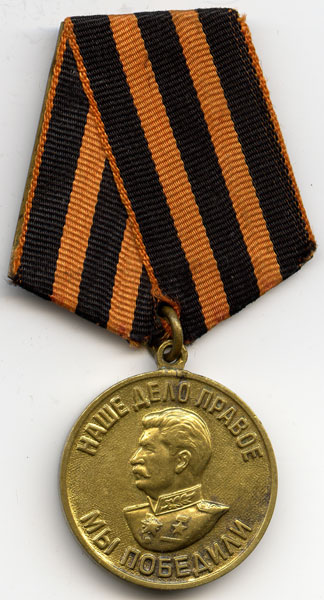 The Medal for Victory over Germany, instituted on the 9th of May 1945 and awarded to every war veteran, over Stalins effigy the famous words from Molotovs speech: "Our cause is just. Source: collectie Auke de Vlieger.