Arthur Axmann was born February 18th, 1913 in Hagen, (Northern Rhineland -Westphalia) the youngest of five children of lawyer Alois Axmann and his wife Emma. In 1916, the family moved to Berlin where Alois was to work as an insurance agent until his death in 1918. In 1919 Arthur was registered in the 300 Gemeindeschule (primary school) in Berlin. Based on his excellent study results, he was upgraded and in 1922 he left with a scholarship for the Oberrealschule. This school is comparable to a gymnasium although the students were taught an elementary Latin and further received hardly any classical education.

On September 14th, 1928, Axmann attended a speech by Joseph Goebbels (Bio Goebbels), which triggered his interest in the N.S.D.A.P. In November, at the age of 15, he joined the HitlerJugend and was soon promoted to Führer (leader) of the HJ in Wedding, a suburb of Berlin. During 1929 and 1930 he was active as speaker for the NS Schülerbund (National Socialist Students Association), the students organization of the N.S.D.A.P.

On March 12th, 193, Axmann took final exams at his Oberrealschule. At the same time he ended his activities for the NS Schülerbund. In the same year, he took up the study of economics, political science and law at Berlin University. He did not join the NS Studentenbund though. In the summer of 1931, both his mother and his brother became unemployed. He interrupted his study in order to sustain himself. The necessity for his family to be able to work again so he could resume his study, made him join the N.S.D.A.P. in September 1931. In his view, this party managed to solve the increasing unemployment in the best way possible.

Career within the HitlerJugend

In 1932, Axmann joined the Reichsleitung der HitlerJugend (overall leadership of the HJ). Following the seizure of power by the Nazis in January 1933, Axmann became Gebietsführer (regional leader) from May 1933 onwards and Leiter des Sozialamtes der Reichsjugendführung (social department of the HJ leadership). In this capacity he provided vocational training within the HJ. In November 1934, he took charge of the Berlin branch of the HJ and from July 1936 onwards, he was at the head of the Reichsberufswettkampf (job competition), a yearly event in which people competed against each other in their own profession.

Axmann served in the Wehrmacht as a soldier from the start of the Second World War in September 1939 until May 1940. May 1st, 1940, he was named deputy to Reichsjugendführer Baldur von Schirach (Bio Von Schirach). The widening rift between Adolf Hitler and Von Schirach caused the latter to gradually fall from grace. Ultimately, on August 8th, 1940, Von Schirach was removed from his position. Axmann was his logical successor and would remain Reichsjugendführer until the end of the war.

In contrast to his predecessor, Axmann put far more emphasis on the military aspect within the HJ. Where Baldur von Schirach had given priority to mobilization of German youth and the group spirit, Axmann attempted to prepare the youth for future military activities. From then on, the so-called HJ Streifendienst would serve as a pool of new recruits for the Waffen-SS. This elite group of youngsters within the HJ was especially selected for their discipline and was considered the role model of the HJ. They were active in neutralizing other youth groups for instance.

Activities during the war

In July 1941, Operation Barbarossa was launched, the invasion of the Soviet Union by Nazi Germany. Axmann took part in this massive invasion but he was gravely injured in December 1941, losing his right arm. He remained committed to the war and mobilized the 12 SS Panzer-Division HitlerJugend, commanded by Kurt Meyer. This division, consisting mainly of 17 year old youngsters from the HJ, saw action until the end of the war and was involved in the defense of Normandy.
In 1944, he was awarded the Deutscher Orden des Grossdeutschen Reiches (German Order of the Greater German Empire) the highest decoration the Nazi party could bestow upon an individual. Axmann was one of the 11 persons who would receive this prestigious decoration and one of the two individuals who did not receive it posthumously.

Even in the last weeks of the war, he relentlessly continued the defense of Germany. To that end, he mobilized relatively small units of the HJ which would subsequently be made part of the Volkssturm. This also consisted of boys from the Jungvolk, a subdivision of the HJ for boys between the age of 10 to 14. They saw action during the battle for Berlin from mid April until early May 1945. In the last months of the war, he also was put under outside pressure to allow girls to take part in the last ditch defense of Germany. He vehemently rejected these suggestions: "Women give life, they do not take it," Axmann argued. Shortly after Hitlers suicide (Bio Hitler) on April 30th, 1945, he and N.S.D.A.P. secretary Martin Bormann (Bio Bormann) fled the Führerbunker and left Berlin.

After the war Axmann was officially declared dead although he lived in Mecklenburg-Vorpommern for some time, using the alias Erich Siewert. After having made contact again with members of the HJ and the N.S.D.A.P., he was arrested in December 1945, along with members of the HJ. Axmann and his companions were suspected of plotting a neoNazi conspiracy. In October 1946, he was temporarily released but was arrested again in July 1947 and imprisoned for a few weeks. During this period he was interrogated. In June 1948, he was transferred to camp Nuremberg-Langwasser. A month later the indictment against him was drafted by the Nuremberg court.

In April 1949, during the deNazification of Germany, he was sentenced to 39 months forced labor. The court earmarked him as the main suspect, the most severe accusation against former Nazis. He was also sentenced for having attempted, together with former N.S.D.A.P. officials, to form an underground organization in order to regain power after Germanys surrender.

After he had failed to find work in Schleswig-Holstein, he moved to Gelsenkirchen. He was employed as salesman for a coffee enterprise for a few years.

On August 19th, 1958, he was sentenced again, this time by the court in Berlin. The court charged him with indoctrination of youth, although in mitigation the court argued Axmann had acted out of his firm conviction that he had acted correctly and not out of self interest. Axmann was sentenced to a fine of 35.000 Marks, approximately half the value of his real estate in Berlin. In order to be able to meet the payment, he was obliged to sell his house.

Shortly afterwards, he founded a trading company but he had to close it down in 1960 due to disappointing results. He did not succeed in establishing a second firm. Between 1971 and 1976 he was responsible for establishing and running a recreation resort of a Spanish enterprise on Gran Canaria. After 1976 he returned to Berlin and ended his active professional life. He used his spare time to work on his memoirs and in 1994 he published his first personal history of the HJ in the form of a compilation in four volumes entitled: "Die Schicksaljahre der HitlerJugend (The fateful years of the HJ). The following year he published his autobiography entitled: "Das kann doch nicht das Ende sein" (That cannot be the end). In the last years and months of his life, he appeared in a few television documentaries as well. In those, he acknowledged he had served a regime which "had committed many crimes."
Arthur Axmann passed away on October 24th , 1996 in Berlin at the age of 83.

deNazification
Post war policy of the allies in Germany to punish Nazi war criminals and to remove known Nazis from positions of power or public service.
Division
Military unit, usually consisting of one upto four regiments and usually making up a corps. In theory a division consists of 10,000 to 20,000 men.
Führer
German word for leader. During his reign of power Adolf Hitler was Führer of Nazi Germany.
indoctrination
The education or brainwashing of people, sometimes by force, to accept a certain opinion or political doctrine. This doctrine is to be followed henceforth without question.
invasion
Armed incursion.
mid
Military intelligence service.
mobilization
To make an army ready for war, actually the transition from a state of peace to a state of war. The Dutch army was mobilized on the 29 August 1939.
Nazi
Abbreviation of a national socialist.
Rhineland
German-speaking demilitarized area on the right bank of the Rhine which was occupied by Adolf Hitler in 1936 after World War 1.
Soviet Union
Soviet Russia, alternative name for the USSR.
Waffen-SS
Name of Military section of the SS.
Wehrmacht
German armed military forces, divided in ground forces, air force and navy. 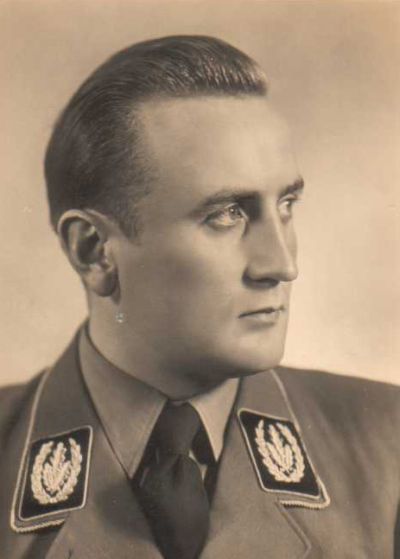 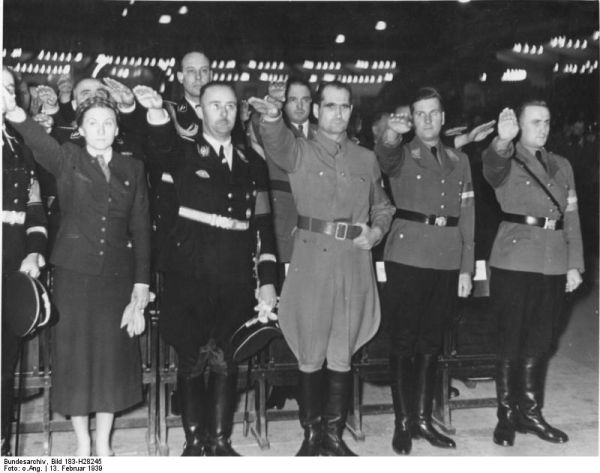 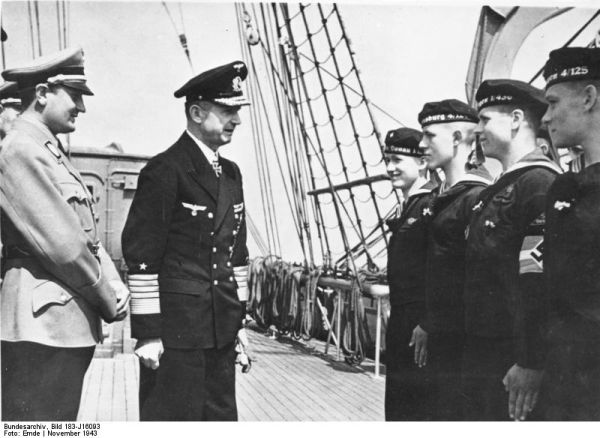 Artur Axmann and Karl Dönitz inspecting members of the naval branch of the HitlerJugend aboard the "Horst Wessel". Source: Commons: Bundesarchiv. 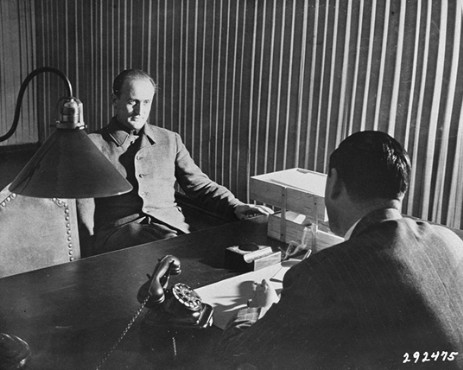 Artur Axmann being interrogated about war crimes at the Nuremberg trial. Source: NARA.