Below is the notorious Order No. 227, also known as the "Not one step back!" order, issued by the Peoples Commissioner of Defense, Joseph V. Stalin. As the military situation became untenable in the summer of 1942 and the Soviet supreme command, Stavka, acknowledged that a symbolical step had to be taken, Stalin issued this order. It was not distributed in print but was read to all military personnel by political officers.

Order by the Peoples Commissioner of Defense of the USSR

Pertaining measures in order to enhance discipline and order within the Red Army and prohibition to abandon military positions without permission.

The enemy throws fresh units into battle and regardless of his heavy losses, he creeps forward, penetrating deep into the Soviet Union, capturing new territory, destroying our towns and villages, looting, raping and murdering the Soviet population. Fighting is going on near Voronesh, on the river Don and in the south before the gates of the northern Caucasus. The German occupiers have broken through to Stalingrad and aim to capture the Kuban and the northern Caucasus with their riches in oil and grain, whatever the cost. The enemy has already captured Voroshilovgrad, Starobelsk, Rossosh, Kupyansk, Valuiki, Novocherkassk, Rostov-on-the-Don and half of Voronezh. A number of troops on the Southern Front has abandoned Rostov and Novocherkassk  emulating a number of scaremongers  without putting up any serious resistance or waiting for orders from Moscow and in so doing blemished their banners.

The population of our country, feeling love and respect for our troops, starts to feel disappointment towards the Red Army, looses confidence in the Red Army and many blame the Red Army for leaving our people behind under the yoke of the suppressor while the army itself retreats to the East.

Some unwise people at the front find consolation in talks about the idea we are able to retreat still further east, as we possess a vast territory, lots of land and a large population and because we will always have grain in abundance. In so doing they aim to justify their scandalous behavior at the front. But such talks are utterly false and mendacious and only to the advantage of our enemies.

Every commander, soldier and political officer must realize that our means are not inexhaustible. The territory of the Soviet Union does not consist of just desert but of people: workers, farmers, intellectuals, our fathers, mothers, spouses, brothers and children. The territory of the U.S.S.R. our enemy has captured or attempts to capture, consists of grain and other food stuffs for the army and the rear areas; metal and fuel for the industry, that same industry that provides weaponry and munitions to the armed forces and of railways. After the loss of the Ukraine, Byelorussia, the Baltic states, the Donetz basin and other areas we are left with a far smaller territory and hence far less people, grain, metal and factories. We have lost over 70 million citizens, over 13 million tons of grain and over 10 million tons of metal each year. We now no longer exceed the Germans in human reserves or reserves of grain. Retreating further means we work ourselves and our motherland into ruin. Each patch of land we abandon will strengthen the enemy and weakens our defense and our motherland.

Therefore it is essential we must once and for all cut off all talk about retreating indefinitely, possessing a vast territory, our country being large and rich, having a large population and always having grain in abundance. Such talk is mendacious and harmful, it will make us weak and the enemy stronger for if we do not put a stop to this withdrawal, we will end up without grain, without fuel, without metal, without raw materials, without factories and without railways.

It follows from all of this that the withdrawal must be stopped now.

"Not a single step back." That must now be our main slogan.

Our motherland is going through a difficult period. We must stop the enemy, drive him out and destroy him, whatever the cost. The Germans are not as strong as the scare mongers think. They are making a last ditch effort. Withstanding their blow now means we will achieve victory over them within the next couple of months.

Can we withstand such a blow and drive the enemy to the west afterwards? Yes, we can because our factories in the rear areas are functioning very well now and our fronts receive increasingly more aircraft, tanks, artillery pieces and mortars.

But what is still missing?

We miss order and discipline within the companies, battalions, regiments, divisions, within the armored units and within the squadrons of the air force. Herein lies our Achilles heel. Within our armed forces, we must introduce the most stringent order and iron discipline if we want to save the situation and hold on to our motherland.

Scare mongers and cowards are to be executed on the spot.

From now, iron discipline must be demanded of every commander, soldier and political officer: not one step backwards without being ordered by a superior.

That is the slogan of our motherland.

Putting this slogan into practice means we are defending our territory, save our motherland, kill the hated enemy and gain victory over him.

Must we not learn from our enemies in this connection like our forebears did in the past and subsequently gained victory over them?

I think we should.

The Supreme Command of the Red Army hereby orders:
1. the military councils at the fronts and especially the front commanders:

2. the military councils of armies and above all the army commanders:

3. the commanders and commissioners of corps and divisions:

This order is to be read to all companies, squadrons, batteries, command units and staffs.

The Peoples commissioner of Defense
I. Stalin

division
Military unit, usually consisting of one upto four regiments and usually making up a corps. In theory a division consists of 10,000 to 20,000 men.
Front
Largest Soviet ground formation. It was attached to a certain area which gave its name to the units involved. For instance the Voronezh front.
propaganda
Often misleading information used to gain support among supporters or to gain support. Often used to accomplish ideas and political goals.
Red Army
Army of the Soviet Union.
resistance
Resistance against the enemy. Often also with armed resources.
Soviet Union
Soviet Russia, alternative name for the USSR.
Stavka
The high command of the Russian military forces in World War 2, chaired by Stalin. 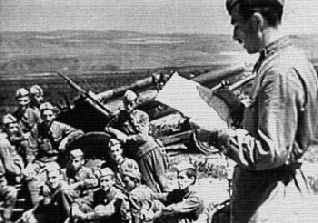 Order nr. 227 is being read to troops at the front. Source: Public domain. 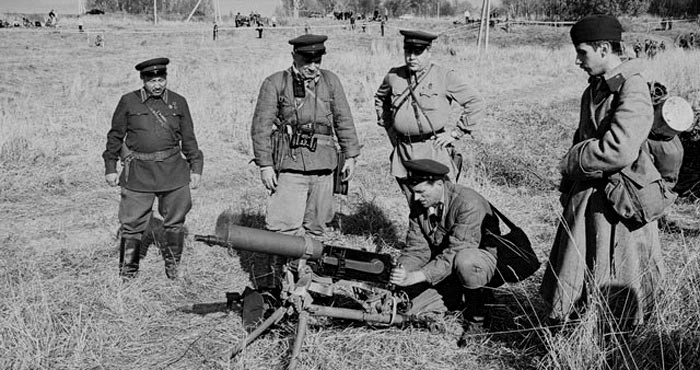 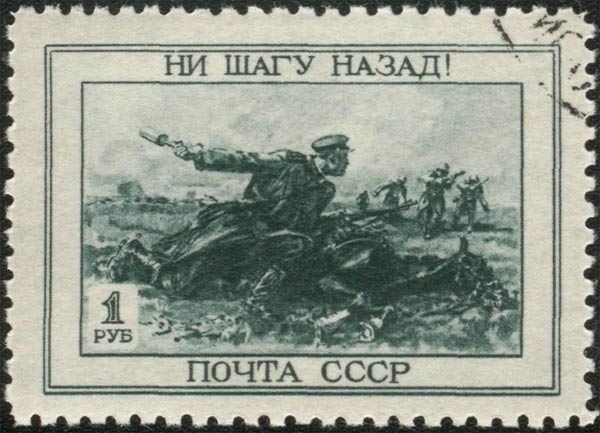 A postage stamp of 1 ruble from April 1945 with the well known phrase: Not one step back!" Source: Public domain.