Wilhelm Bittrich was born February 26, 1894 in Wernigerode in the Harz in the federal state of Saxony-Anhalt.

At the outbreak of World War One, Wilhelm Bittrich reported as a volunteer and was posted to Infanterie-Regiment 77. In 1944 he was gravely wounded. In October 1915, he was promoted to Leutnant der Reserve and in 1916, he made the transition to the Fliegertruppe, scoring three aerial victories in Jagdstaffel 37 (fighter squadron). Bittrich was awarded the Iron Cross 2 and 1 for his achievements in World War One.

After World War One he joined the Freikorps Hülsen and found employment as a sports instructor and with a real estate agency for a short while. On December 29, 1922, he married actress and director Käte Sonntag-Blume. Between 1924 and 190 he was a flight instructor in the Stettiner Sportclub GmbH in Stettin-Krekow and at the German school for commercial pilots in Schliessheim near Munich. On April 1, 1932 he was commissioned in the Reichswehr as a civilian. Here he resumed his job as flight instructor and was sent to Lipezk in the Soviet Union where future Luftwaffe personnel was being trained in secret at the time.

In 1932, one promotion followed the other: Bittrich was a member of the SA from March to June. July 1 he joined the SS (Nr. 39177) as SS-Anwärter (apprentice) in SS-Fliegerstaffel Ost and his promotion to SS-Mann followed on July 15. He was promoted to SS-Oberscharführer on September 10, and subsequently to SS-Sturmführer on October 31, and appointed Führer of his Fliegerstaffel. He joined the N.S.D.A.P. on December 1, 1932 (Nr. 829 700).

Wilhelm Bittrich joined the SS-Verfügungstruppe in 1934 and was promoted to SS-Obersturmführer on April 21. He was charged with the establishment of 1. Batallion/SS-Standarte Germania and on June 17, 1934 he was promoted to SS-Hauptsturmführer. A promotion to SS-Sturmbannführer followed on October 1, 1936 and subsequently he was appointed Kommandeur II. Batallion/SS Regiment Deutschland. He was promoted again on January 30, 1938, this time to SS-Obersturmbannführer. June 1, 1939, he was appointed Führer, Stab Leibstandarte SS Adolf Hitler and June 6, 1939, saw his promotion to SS-Standartenführer. During the invasion of Poland, he served as Oberst des Stabes SS-Infanterie-Regiment (mot.) Leibstandarte SS-Adolf Hitler. As per February 1, 1940, Bittrich was attached to the SS-Führungshauptamt charged with formulating of regulations. He was promoted to SS-Oberführer on September 1, 1940. From December 1, 1940 onwards he was given a front command again as Kommandeur SS-Standarte Deutschland, taking part in the fighting in the Soviet Union until October 1941.

Between October 15 and December 31, 1941 he was in command of 2. SS-Panzer-Division Das Reich, replacing Paul Hauser who had been injured. October 19, 1941 he was promoted to SS-Brigadeführer and Generalmajor der Waffen-SS. On May 1, 1942, Bittrich was ordered to transform the SS-Kavalerie-Brigade to an SS-Kavalerie-Division which would ultimately become the 8. SS-Kavalerie-Division Florian Geyer. During the invasion of the Soviet Union, Bittrich was in command of this division from August 1942 until February, 1943 and subsequently he was appointed commander of the 9. SS-Panzergrenadier-Division Hohenstaufen. He was promoted to SS-Gruppenführer and Generalleutnant der Waffen-SS. During the deployment of this Panzergrenadier-Division in Belgium and France, it was transformed to 9. SS-Panzer-Division in October 1943, taking part in the battles of II. SS-Panzerkorps near Tarnopol in the Soviet Union from March 1944 onwards. June 19, 1944 he was replaced as commander of Hohenstaufen by SS-Standartenführer Thomas Müller.

July 31, 1944, Bittrich was appointed Führer of II. SS-Panzerkorps. In command of 9. SS-Panzer-Division Hohenstaufen, 3. Fallschirmjäger-Division and units of 21. Panzer-Division, he blocked the Allied advance towards Caen in Normandy. Bittrich was also instrumental in the escape of units of 7. Armee and 5. Panzerarmee from the Falaise pocket on August 20 and 21.

In order to have his troops rest and reorganize, Bittrich and his II. Panzerkorps were sent to the area around Arnhem. During the battle for Arnhem, he was co-responsible for the encirclement of the British 1st Airborne Division in Arnhem. From December 16, 1944 onwards, II. Panzerkorps was subordinate to 6. Panzerarmee commanded by Sepp Dietrich (Bio Dietrich) and took part in the Ardennes offensive. During this operation, Bittrich was in command of his old 9. SS-Panzer-Division Hohenstaufen, the 2. SS-Panzer-Division Das Reich and the Führer-Begleit-Brigade. In February 1945, his theatre of operations was shifted to Hungary. At the end of the Second World War, he and his Korps conducted the defense of Vienna between April 2 and 13. At the end of this battle, Bittrich and the remainder of his troops retreated westwards and he was made a prisoner-of-war by the Americans on May 8, 1945.

In January 1948, Bittrich had himself extradited to France at his own request because of his alleged order to execute 17 resistance fighters in Nimes. During the proceedings, it transpired he had never given such an order and had even taken disciplinary measures against the officers responsible for the executions. As commander he was held accountable for the actions of his subordinates though and sentenced to 5 years imprisonment but released soon after because of his lengthy detention pending trial. On June 16, 1953 he was tried a second time and sentenced to 5 years for executions but the French court of appeal in Bordeaux acquitted him and he was released in 1954. He settled down near Lake Starnberg in southern Bavaria and was unfit for work due to illness.
He passed away on April 19, 1979 in Wolfartshausen in Bavaria.

Read more about the decorations of this person on https://www.tracesofwar.com" target=" _blank">TracesofWar.com

Ardennes offensive
Battle of the Bulge, Von Rundstedt offensive or die Wacht am Rhein. Final large German offensive in the west from December 1944 through January 1945.
Batallion
Part of a regiment composed of several companies. In theory a batallion consists of 500-1,000 men.
Brigade
Consisted mostly of two or more regiments. Could operate independently or as part of a division. Sometimes they were part of a corps instead of a division. In theory a brigade consisted of 5,000 to 7,000 men.
Division
Military unit, usually consisting of one upto four regiments and usually making up a corps. In theory a division consists of 10,000 to 20,000 men.
Fallschirmjäger
German paratroopers. Part of the Luftwaffe.
Freikorps
German paramilitary units established directly after the Great War by former front soldiers. These groups were often named after their commander. Freikorps formed the basis of the eventual SA or Sturmabteilung.
front
Largest Soviet ground formation. It was attached to a certain area which gave its name to the units involved. For instance the Voronezh front.
Führer
German word for leader. During his reign of power Adolf Hitler was Führer of Nazi Germany.
Germania
The capital of the Third Reich after the war. Designed by Albert Speer, but never realised.
invasion
Armed incursion.
Iron Cross
English translation of the German decoration Eisernes Kreuz.
Leibstandarte
Elite troops, originally Hitlers body guards. Starting as a motorized infantry regiment it grew into a Panzer division.
Luftwaffe
German air force.
offensive
Attack on a smaller or larger scale.
Regiment
Part of a division. A division divided into a number of regiments. In the army traditionally the name of the major organised unit of one type of weapon.
Reichswehr
German army during the Weimar republic.
resistance
Resistance against the enemy. Often also with armed resources.
Soviet Union
Soviet Russia, alternative name for the USSR.
squadron
A military unit in the Belgian navy usually six to eight small ships operating together under one command. The smallest military unit in the Dutch air force of about 350 men. In most countries is the designation of a military unit thesize of a company. It is either an independent unit, such as a battery, or part of a bigger Calvary unit. In the air force it is the designation of a unit of aircrafts.
Waffen-SS
Name of Military section of the SS. 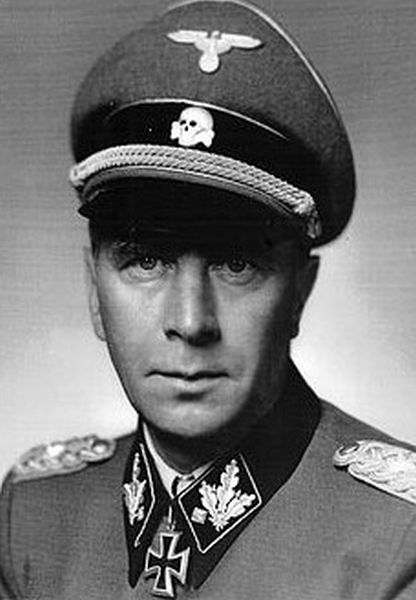 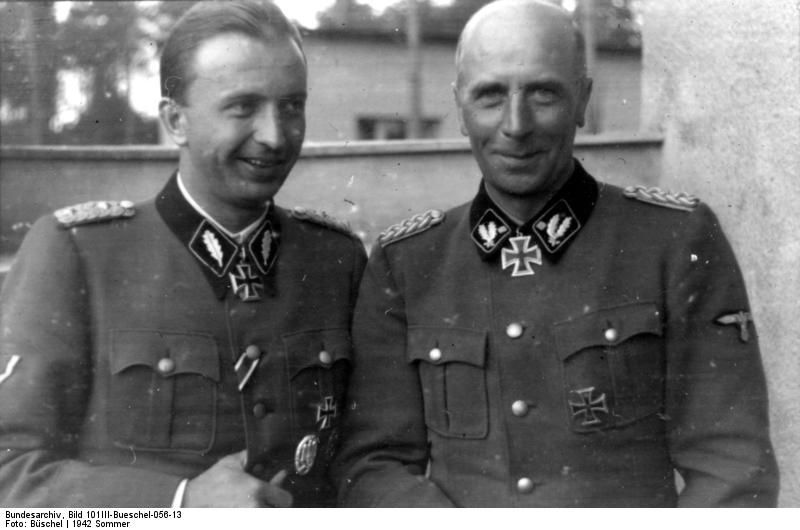 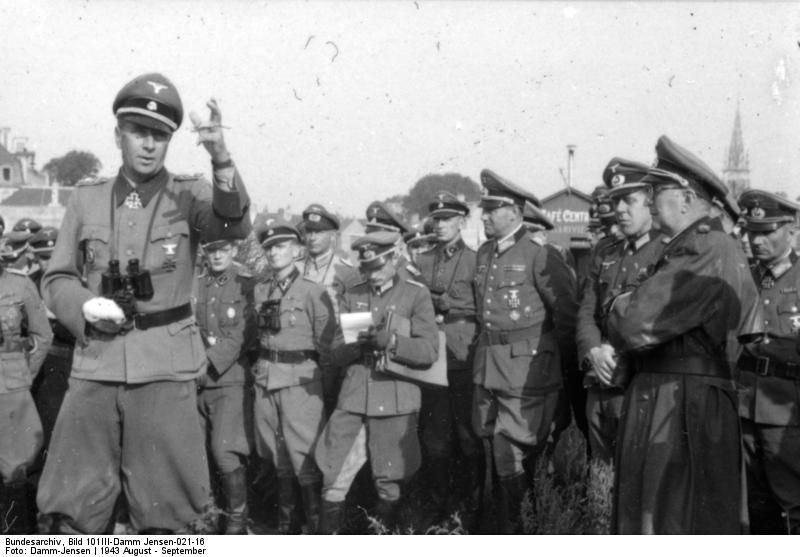 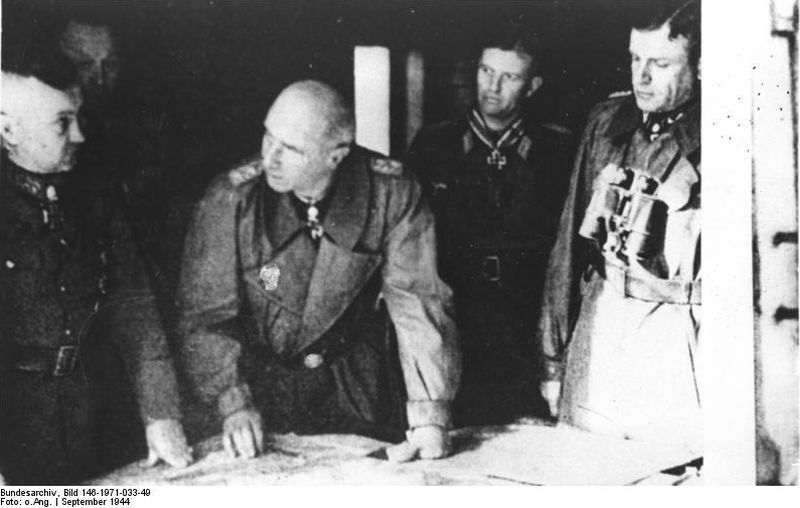 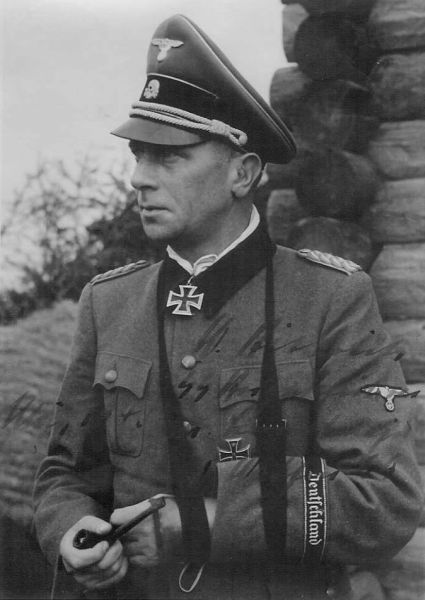 Translated by:
Arnold Palthe
Article by:
Wilco Vermeer
Published on:
07-02-2018
Feedback?
Send it!