Erich Rajakowitsch, born in 1905 in Trieste, was a lawyer in Graz first, a small town which was also the birthplace of another well known figure, Bishop Alois Hudal. In addition, Alois was also the son-in-law of Anton Rintelen, governor of Stiermarken and the Austrian ambassador to Italy. Erich Rajakowitsch, holding the rank of Hauptsturmführer Waffen-SS and chief of the special office for the Jewish question, was charged with complicity in the deportation of 10,000 Dutch Jews who were deported from Camp Westerbork to Auschwitz from 1942 onwards, including Anne Frank (Bio Frank, Anne) from Amsterdam.

In 1939, Rajakowitsch was sent to Poland as a volunteer after the country had been attacked by Germany. On initiative of his friend Adolf Eichmann (Bio Eichmann), the first concentration camp for Jews was established there. Both of them had worked in Vienna previously. Simon Wiesenthal writes about Rajakowitsch's participation in the so-called Lublin transports of 1939 when Rajakowitsch still served in a Sonderkommando in Poland. Meanwhile, the bond between Rajakowitsch, Adolf Eichmann and Hans Fischböck (Bio Fischböck) had grown stronger due to their close co-operation.

Eichmann in his capacity as chief of Referat IV B 4, Rajakowitsch as his most trusted associate and Fischböck as Secretary of Trade were all involved in the anti-Jewish legislation. Rajakowitsch looted a fortune in Jewish shares while Fischböck established his Devisenschützkommando abroad which co-operated closely with the Reichsbank and the RSHA to make robbing Jewish property and bribing Jews easier. The co-operation between Rajakowitsch and Fischböck was to be continued in the Netherlands while Eichmann remained at the helm of Referat IV B 4 in Berlin.

In April 1941, Rajakowitsch arrived in the Netherlands in order to co-ordinate the persecution of Jews within the machinery of SD chief Hanns Rauter (Bio Rauter) and as representative of Adolf Eichmann's Referat IV B 4. This branch office of the Judenreferat in The Hague was to be the role model for the solution of the Jewish question all over Europe. Through this office, Rajakowitsch introduced the yellow Jewish star. In addition, he coordinated the Auswanderungskasse (Emigration fund). This was a fund in which Jewish had to deposit a certain sum, the so-called Reichsfluchtsteuer (emigration tax) in case they or other members of the Jewish community in Germany, Austria and the Netherlands wanted to buy their way out of Nazi occupied areas in order to leave for safer places. The proceeds were funneled into Swiss bank accounts of high ranking Nazis. Reinhard Heydrich (Bio Heydrich) had dispatched Rajakowitsch to the Netherlands when he headed the Zentralstelle für Jüdische Auswanderung (central agency for Jewish emigration) in Vienna, Prague and Berlin. Under the guise of Vermögensverwaltung und Rentenanstalt (management of capital and interest), confiscated currency, shares and jewelry were deposited in special accounts.

In the fall of the same year, he was made subordinate to Jew hunter Willy Zöpf, head of the Befehlshabender Sicherheitsdienst. In this way Rajakowitsch was directly involved in all anti-Jewish measures in the Netherlands and in 1942 he set up the first transports from the western part of the Netherlands to Westerbork. In 1942, in the absence of Zöpf he had issued a telegraphic order for all Dutch Jews interned in Camp Dracy near Paris to be transported to Auschwitz. Along with the Stellvertreter des Führers (deputy of the Führer) and the Reichskommissar für die Festigung des Deutschen Volkstums (State commissioner for the settlement of the German people), he advocated to have the Jews declared stateless. This is important as in the period between October and December 1942, Rajakowitsch took great pains to have foreign Jews residing in the Netherlands treated as Jews first and foremost and less as foreign Jews.

After Rajakowitsch had completed the Endlösung in the Netherlands, he voluntarily joined the Waffen-SS in 1943. After training in Bad Tölz in Bavaria, he was dispatched to the eastern front.

After the war, he was briefly interned in an American prison camp until he escaped and went into hiding in Graz, Stiermarken, staying with his ex-wife. Together with his family, his wife's lover and a liaison officer, who had been charged with murder of thousands of Yugoslav Jew, just like Rajakowitsch, he fled to Italy. Bishop Hudal took him under his wings and provided shelter for his family in one of the helpful convents. Meanwhile, the bishop would obtain the necessary documents for their crossing to Argentina. Rajakowitsch arrived in Argentina by plane via Chili on February 26, 1952. After the fall of Perón in 1955, Rajakowitsch decided to return to Italy via Trieste with a passport he had bought on the black market. In the meantime he had changed his name to Erico Raja and settled down in Milan. He became manager of the trade firm of Enneri & Co, a firm specializing in profitable transactions with Hungary, the DDR and Poland. Towards 1963, his personal possessions (various houses in Italy, Switzerland and a 7,413 acre finca or farm in Mexico, were valued at some 4 million US $.

In 1961, Simon Wiesenthal of Vienna tracked him down and later in 1962, Wiesenthal contacted the Italian authorities. As it happened, Rajakowitsch was already under scrutiny by the Italian secret service on suspicion of selling industrial secrets and forbidden strategic goods to the eastern bloc. He was frequently spotted with Nikolai Svetailov, member of the Soviet trade agency in Rome and rumors were also going around as to bribes to Soviet officials in connection with his dealings with the eastern bloc. Conclusive evidence did not exist however and Wiesenthal was unable to persuade the Italian public prosecutor to arrest him since after all Rajakowitsch had done no harm to Italian citizens during the war. They could however submit a request for his extradition to the public prosecutor in Vienna but he did not bother to act fast either. Meanwhile Rajakowitsch had found out his identity had been unveiled, due to a blunder by a reporter of the paper Corriera della Sera. The reporter had wanted to interview him in connection with the article by Simon Wiesenthal about Erico Raja being the alias of Erich Rajakowitsch which was to be published the next day.

The next day, the bird had flown: early in the morning, Rajakowitsch had drawn money and had gone into hiding. The next day, his picture appeared on the front pages of newspapers all over Europe. Wiesenthal kept track of him and he fled to Germany via Switzerland. He was however expelled from both countries and eventually decided to give himself in to the Austrian authorities. He was charged with complicity in the deportation of 83 Jews from Paris and sentenced to 2.5 years in prison minus his detention pending trial. When he was released in 1966, he immediately went into hiding and he has not been seen since. Rajakowitsch was never tried for the deportation of the Dutch Jews. The Austrian government considered it "unusual" to extradite its own citizens, according to the spokesman of the Justice Department. In case he would ever leave the country, the Dutch public prosecutor would immediately request his extradition. Rajakowitsch continued leading a retired life and eventually passed away in May 1988 at the age of 82 in Graz where he once began as a solicitor.

Anne Frank
Jewish girl from German descent. In hiding in the back part of a house in Amsterdam since 1942. Betrayed and deported to Bergen-Belsen. Deceased in April 1945. Renowned for her diary.
concentration camp
Closed camp where people are being held captive that are considered to be anti- social, enemies of the state, criminal or unwanted individuals. These groups mostly do not get a fair trial or are condemned to doing time in a camp.
Endlösung
Euphemistic term for the final solution the Nazis had in store for the Jewish problem. Eventually the Endlösung would get the form of annihilating the entire Jewish people in extermination camps.
front
Largest Soviet ground formation. It was attached to a certain area which gave its name to the units involved. For instance the Voronezh front.
Führer
German word for leader. During his reign of power Adolf Hitler was Führer of Nazi Germany.
Jewish star
Star of David on a yellow background which had to be worn by Jews in Nazi Germany and occupied territory during World War 2.
Jews
Middle Eastern people with own religion that lived in Palestine. They distinguished themselves by their strong monotheism and the strict observance of the Law and tradition. During World War 2 the Jewish people were ruthlessly persecuted and annihilated by the German Nazis. . An estimated 6,000,000 Jews were exterminated.
Nazi
Abbreviation of a national socialist.
Reichskommissar
Title of amongst others Arthur Seyss-Inquart, the highest representative of the German authority during the occupation of The Netherlands.
RSHA
Reichssicherheitshauptamt. The central information and security service of the Third Reich.
track
The track of a tank.
Waffen-SS
Name of Military section of the SS. 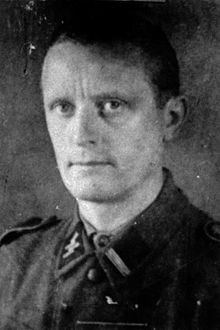 Translated by:
Arnold Palthe
Article by:
Jochem Botman
Published on:
22-03-2018
Feedback?
Send it!