Mayor-General Clarence Huebner is predominantly famous for the fact he commanded the 1st Infantry Division during the Omaha Beach landings on 6 June 1944. A remarkable feat, considering he had been relieved from this position six months earlier after clashing with his senior commander, the British Field Marshall Sir Harold Alexander.

Clarence Ralph Huebner was born on 24 November 1888 in Ushton, Kansas, USA. He was the first child of Martha Rischel and Samuel Huebner, a farmer of German decent. The young Huebner went to a small elementary school in Ushton, where he showed a talent for grammar and math. After his high school years he was active as a student leader. Besides school he practiced several sports, such as basketball, baseball and football. After obtaining his degree he wanted to join the Army but had not yet reached the required minimum age of 21. Because of this he attended the Grand Island Business College in Grand Island, Nebraska. After his graduation he obtained a job as typist for the Chicago Burlington and Quincy Railroad in 1908. Two years later he was old enough to join the army and enlisted.

After his basic training Huebner was assigned to the 18th Infantry Regiment. He received his infantry training at Fort McKenzie, Wyoming. It would take up to 1916 before Huebner would join combat for the first time. This was during the Pancho Villa Expedition at the Mexican border, where the Americans wanted to capture the Mexican revolutionist leader Pancho Villa. After this, Huebner enjoyed a series of quick promotions  first to the rank of Sergeant, quickly followed with a promotion to 2nd Lieutenant during the summer of 1916. June 1917 he was sent to France to fight in the First World War. In March 1918 Huebner was injured near Beaumont. He sustained an injury to the head, but made a quick recovery. During the remainder of the First World War he moved up the ranks quickly. At the end of the war he was in command of the 28th Infantry Regiment in the temporary rank of Lieutenant-Colonel.

After the war he was degraded to Major. On 26 February 1921 Huebner married Florence Barret. In 1924 he went to the Command and General Staff School in Fort Leavenworth, where he would stay until 1933. Until 1938 he held several training positions within the infantry. During that year he was promoted to Lieutenant-Colonel. He remained in this rank until the start of the Second World War in 1939.

Between the summer of 1940 and March 1942, Huebner was active within the training branch of the Office of the War Department General Staff, where he fulfilled a role in the formation, organisation and training of armoured units. In 1942 he was briefly active as commander of the Infantry Replacement Training Centre in South Carolina before returning to the Office of the War Department General Staff. At this time the United States had become an active participant in the Second World War. Huebner helped to train a military unit which would participate in the war as soon as it was ready,

May 1943 Huebner transferred to North Africa, where he became staff officer in the 15th Army Group of Field Marshall Sir Harold Alexander. Around this time he was promoted to the rank of Major-General. At the time of his arrival, the 15th Army Group was busy planning Operation Husky, the allied landings on Sicily. Huebner became involved in the preparations for the invasion. The operation commenced on 10 July 1943. Before the battle on Sicily small cracks appeared in the allied cooperation caused by the development of the operation. The border between American and British Armies was moved because the Brits encountered strong German resistance in their sector. This led to disagreements about the previously set goals, such as the liberation of Palermo. The conflict escalated further, resulting in a race to Messina between Patton's 15th Army Group and Montgomery's (Bio Montgomery) 8th Army. Huebner spoke out in favour of Patton and consequently clashed with Alexander, who supported Montgomery. Together with several other staff officers Huebner was relieved from his role as Major-General. Diplomacy was not one of Huebner's strong suits. He would never have great admiration for the British, he would later claim. However, he would keep his lips sealed to not make these views overly clear during the war itself.

It did not take long for Huebner to be reassigned. Early August General Omar Bradley decided to replace Major General Terry de la Masa Allan, commander of the 1st Infantry Division, with Huebner. He was tasked with restoring discipline amongst the soldiers of the 'Big Red One' - the nickname of the division. Not long after he was given command the division was transferred back to England. In England, it was to prepare for the upcoming invasion in Normandy, where the 1st Infantry Division was to spearhead the landings at Omaha Beach. During this period Huebner was able to put his mark on the division. During training he emphasized discipline and infantry training. According to Huebner, about 2,000 soldier were deemed unfit to fire a gun and the division was also highly dependable on her formidable artillery regiment.

On 6 June 1944 Huebner's division landed on Omaha Beach. The first waves of the invasion were a catastrophe with the division losing over 30% of her troops. Huebner was on board the USS Ancon: 'I had no control'. Only at five o'clock in the afternoon he was able to come ashore and set up a command post. After this he wanted to be as close as possible to the front line to get a good image of the battle and because 'the men had to be able to see their general'. Later in the Normandy campaign Huebner and the 1st Infantry Division played an important role in the battle of St.-Lô and in foiling the German counter-offensive at Mortain, part of Operation Luttich. With these attacks the Germans wanted to regain the area lost during Operation Cobra.

After breaking out of the Normandy pocket, the allies were able to advance rapidly. When the advance eventually stopped a month later, Huebner's division was at the German border at Aachen. Only a month and a half later, on 21 October 1944, the division succeeded in occupying the city. After this, the division was dragged into the battle of the Hürtgen forest as part of the Allied attempt to reach the river Ruhr. After this, the 1st Infantry Division was quickly withdrawn from the battle to resupply. It only had a brief respite from battle because the Germans launched the Ardennes offensive on 16 December. Huebner's division was also sent the Ardennes by General Dwight Eisenhower (Bio Eisenhower) in an attempt to quell the German offensive. During this campaign, the division was active in the northern Ardennes around Eupen. It was to be the last battle Huebner was personally involved in as commander of the 1st Infantry Division.

Late January 1945 Huebner was given commend of V Corps. During the last months of the war he led the corps deep into Germany. His troops reached the Elbe river and made contact with soldiers of the Red Army. When the war came to an official end, the corps had made its way into Czechoslovakia.

After the German surrender Huebner soon made his way back to the United States before returning to Germany in August 1946. Here he held the position of Chief of Staff of the American troops in Europe. He would be in this function for four years. During the last three months he was even in charge of European Command. In August 1950 he returned to the United States and retired from military service.

In 1950 he became the Civil Defence Director for the state of New York. In this role he frequently delivered lectures on the dangers of nuclear war. He would continue doing so for a decade. Afterwards, he supported the foundation of the 1st Infantry Society, a veterans organisation of which he became the president. He also played a role in the creation of the 1st Infantry Museum in Wheaton, Illinois. In 1966 his wife Florence died. Two years later Huebner remarried Anna Imelda Mathews. On 23 September 1972 Clarence Huebner passed away himself in Washington D.C. He is buried at Arlington National Cemetery.

Ardennes offensive
Battle of the Bulge, Von Rundstedt offensive or die Wacht am Rhein. Final large German offensive in the west from December 1944 through January 1945.
Division
Military unit, usually consisting of one upto four regiments and usually making up a corps. In theory a division consists of 10,000 to 20,000 men.
front
Largest Soviet ground formation. It was attached to a certain area which gave its name to the units involved. For instance the Voronezh front.
Infantry
Foot soldiers of a given army.
invasion
Armed incursion.
offensive
Attack on a smaller or larger scale.
Red Army
Army of the Soviet Union.
Regiment
Part of a division. A division divided into a number of regiments. In the army traditionally the name of the major organised unit of one type of weapon.
resistance
Resistance against the enemy. Often also with armed resources. 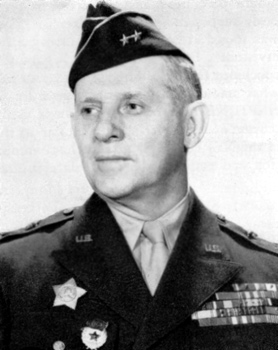 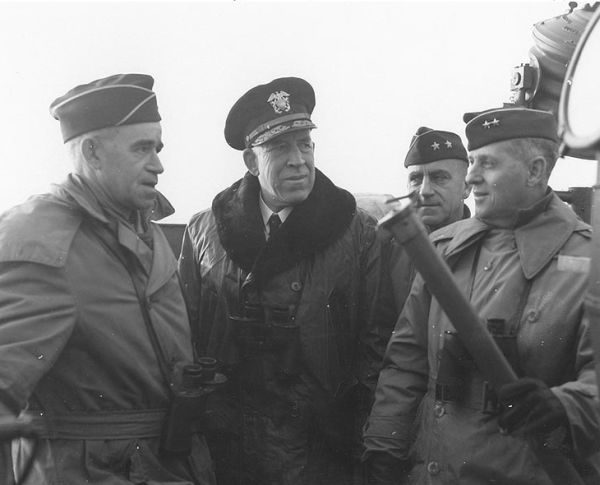 Huebner (right) aboard an LCI on D-Day. Source: U.S. Navy. 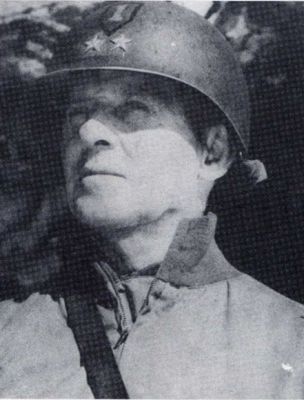