From private residence to spy school to prison

During the Second World War, estate De Oxerhof in Deventer served as a residential building, spy education center and concentration camp. Originally it was a castle and around 1862 it was rebuilt as a modern country house, commissioned by the Van Doorninck family. In 1931 the estate was opened for the public. Families could enter the domains for 25 cents (annual rate).

In June 1943 the Oxerhof, 11 Oxe, Colmschate, in the municipality of Diepenveen, was confiscated by the Leiter des Reichsgebaudedienstes for the SIPO. The owner, Mr. Dirk Bolderhey, was given a very short time to evacuate his house. For the duration of the seizure the owner was paid relocation fees, a part of the profits of the (agricultural) lands and a rent. Damaged caused by the personnel would be restored.

Immediately after the seizure the estate was closed to the outside world. It was prohibited for any Dutchman to enter the terrain under penalty of death. It was to become the summer residence of Chief of police HSSPF Hanns Rauter. The estate was made into a true fortress for his safety, complete with double barbed wire, land mines and blood hounds to keep intruders out. When Rauter finally decided not to use it, it became a recuperation resort for SS-men who had been wounded at the Eastern Front.

In 1944 it was decided to give the building another destination. SS-Obersturmbahnführer Friedrich Knolle, head of the German counter-espionage service had given orders for the establishment of a spy school in Scheveningen at the estate Sorghvliet/Zorgvliet (Seehof), which is now called the Catshuis, 10 Adriaan Goedkooplaan. It was a walled-in estate, well closed off from the outside world, where pupils from all occupied territories and neutral states were secretly being trained as special secret agents. At first they were made ready for missions abroad. They were trained in sabotage, shooting skills, cryptography, radio transmissions and handling several kinds of transportation. Among the recruits were Helene Louise ten Cate  Brouwer, Maria Sassen from Geertruidenberg and the Belgian Pierre Sweerts, also known as The Tarzan from Limburg. All three were trained for missions abroad: Brouwer in Italy, Sassen in Belgium and Sweerst at first in Iran and later on in Spain.

Because of the expected allied invasion of the European continent the emphasis was on recruiting radio amateurs. By means of advertisments Knolles successor, SS-Hauptsturmführer Heinrich Ahrens, new agents were again recruited, who received crash courses at the Oxerhof. The majority however, was being trained as wireless operators for the Informations-Netz (I-Netz), a network formed of informers collecting political and military information behind enemy lines and forwarding it on to the Abwehr, the German military intelligence.

The spy school in Scheveningen, Zorgvliet, thus lost its elitarian status as supplier of professional secret agents. Besides, Zorgvliet closed in the summer of 1944. As a consequence a number of fully trained spies and instructors moved along to the new school Kühoff (Oxerhof) in Deventer, for further training and support of the new recruits and such. Among them was Helene Louise ten Cate  Brouwer, who was a staff member. At the end of 1944 the school was closed and it was turned into a camp for political prisoners.

In 1944 the SD left The Hague to arrive in Deventer, via Zeist. Oxerhof was given its final destination. On the estate a Fahrbereitschaft (driver service) was billeted and a wooden building was furnished as a SD-prison. Left of the driveway there were a mumber of wooden garages and on the right stone barracks, serving as residences of the guards and drivers.

Prisoners not only included Dutch nationals and captured illegals and Jews, but also SS-men or SD-men quilty of desertion or subversive activities like helping people in hiding, defeatism, dereliction of duty, corruption etc. It is known of two SS-men, who were guilty of the above facts, that they were hanged in the Oxerhof: Kriminalsekretär Fritz Hillesheim and Kriminalbeambte Bell, an official of the Zentrale Fahndungsstelle. Both were sentenced to death by the SS und Polizeigericht at the end of 1944 and beginning of 1945.

At the end of the war there were some 40 prisoners in Oxerhof. A number of them was released, but for 10 others it ended badly. They werent shot or executed, but several hours before liberation (April 5 1945) they were brutally murdered by drunken guards. The prisoners were first abused and subsequently buried alive in a big pit. The maltreatment took place on the shooting range, just behind the wooden garages. A day later their mass grave, just a few yards from the woods, was discovered by the Canadian soldiers.

The Gooi en Eemlander of February 21, 1948 reported in an article entitled: SD-victims had to dig their own grave: "The SD guards consisted of three Germans, B. Stiller, F.H. Voss and H. Reinders and two Dutch SS-men, J. Morreau and J. Wapstra. The team was under command of Stiller. He ordered the prisoners to dig a pit, ostensibly to hide car tires for the advancing allied troops. Later on that day it became clear to what purpose the pit was dug. In groups of 2 and 3, the 10 prisoners were fetched from the barracks and shot on the edge of the pit and later thrown into it. When the victims were exhumed later, no bullet holes were found in most bodies. However, terrible mutilations could be recorded, such as ears cut off and smashed noses." Their hands were tied behind their backs. They had had nowhere to go. It became clear that the prisoners had been handled with an axe.

The order for the execution was given by Obersturmführer H. Kolitz, head of department IV of the SD and commander of the Einsatzkommandos in the provinces of Gelderland/Overijssel, in retribution of the attack on Rauter in the night of March 7 1945 near Apeldoorn. To several commanders of the Einsatzkommandos in the surrounding regions the order was given to execute prisoners mentioned on an SD-death list. In Deventer there were still some ten prisoners present on the estate Oxerhof. Kriminalkommissar Werner Haase subsequently gave the order on April 5 to commander B. Stiller to execute (umzulegen) the 10 Dutchmen of the Oxerhof. The guards involved declared during their trials they had executed the prisoners. Nothing was released about why the prisoners had been tortured before their deaths.

After the war the estate wasnt given back to the rightful owner immediately. The Canadian Field Security (section of the investigation service) used the estate until its departure from the Netherlands as a special interrogation center (0-3-0) for SD-spies, including the notorious Anton van der Waals. A former trainee of the Kühoff, the Belgian Pierre Sweerts, wasnt interrogated as a prisoner here, but was employed as an interrogator for the former SD- and Abwehr employees.

Nowadays the estate serves a more positive purpose, namely as a center for philosophy, meetings and study days. On May 6 1991 a monument was unvealed in memory of the 10 resistance people, who were murdered there by the occupier, just hours before liberation.

Abwehr
Term used for the German military intelligence unit during the WW1 and WW2. From 1935 onwards under command of Admiral Wilhelm Canaris. The organisation often came into conflict with other secret services such as the SD and the Gestapo. During World War 2 under Canaris frequently a source for conspiracies against the Nazi regime until in 1943 a major conspiracy by a number of prominent members of the Abwehr was discovered and the Abwehr was placed under command of Himmler. After the assassination attempt on Hitler in 1944, Canaris was discharged and the Abwehr was dissolved. The conspirators and Canaris were prosecuted and in 1945 they were executed atc oncentration camp Flossenburg.
concentration camp
Closed camp where people are being held captive that are considered to be anti- social, enemies of the state, criminal or unwanted individuals. These groups mostly do not get a fair trial or are condemned to doing time in a camp.
Front
Largest Soviet ground formation. It was attached to a certain area which gave its name to the units involved. For instance the Voronezh front.
invasion
Armed incursion.
Jews
Middle Eastern people with own religion that lived in Palestine. They distinguished themselves by their strong monotheism and the strict observance of the Law and tradition. During World War 2 the Jewish people were ruthlessly persecuted and annihilated by the German Nazis. . An estimated 6,000,000 Jews were exterminated.
resistance
Resistance against the enemy. Often also with armed resources.
SIPO
Sicherheitspolizei. Combination (since 1936) of the Gestapo and criminal police. 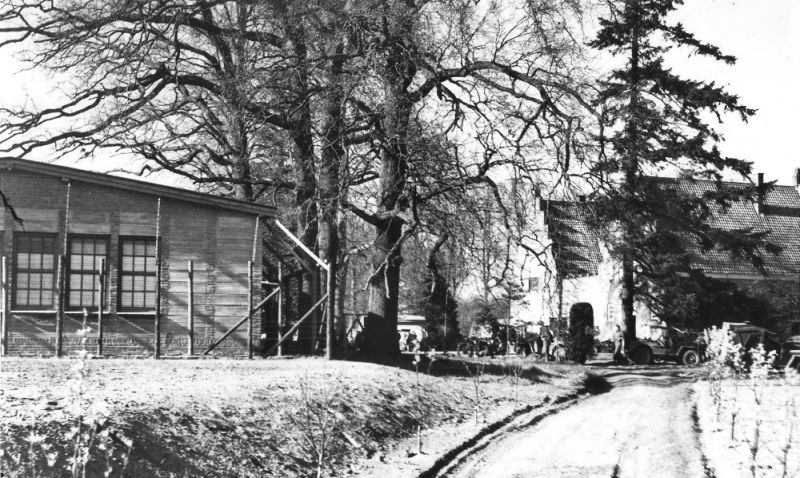 On the left the prison on Oxerhof estate Source: Jochem Botman. 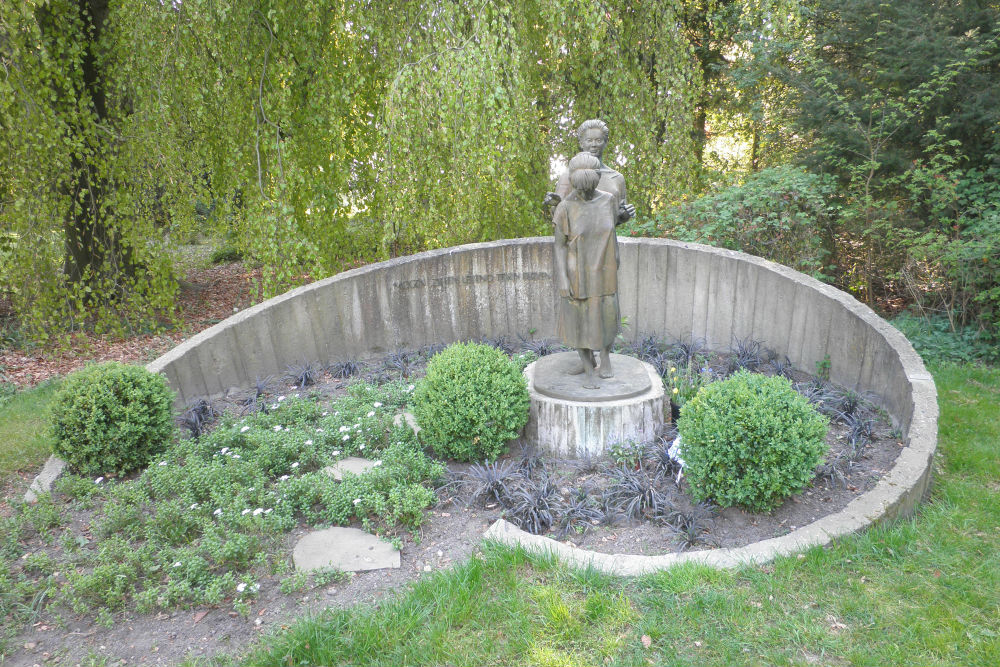