During the Warsaw ghetto uprising in the spring of 1943, Mordechai Anielewicz took command of the Jewish Combat Organization. For three weeks, the ghetto residents were fighting against the German troops commanded by Jürgen Stroop. According to the Polish-Jewish historian and former resident of the ghetto, Emmanuel Ringelblum (1900-1944), Anielewicz was "the very soul of the organization, one of its most dedicated workers". He committed himself to the organization of the resistance "with all his soul". 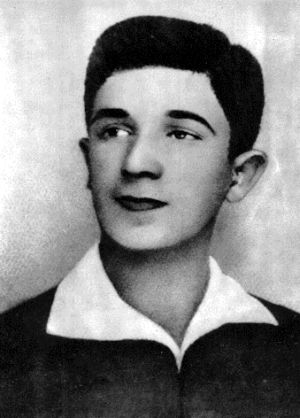 Mordechai Anielewicz, leader of the Jewish Fighting Organization during the uprising in the Warsaw ghetto.

Mordechai Anielewicz was born in 1919 or 1920 in Warsaw, in the suburb of Solec. Growing up was harsh because of the poverty of his Jewish family. The talented and hardworking Anielewicz received a scholarship and graduated from a private gymnasium. He became a member of the Zionists-Revisionists movement, but after a short while he joined a socialist Zionist youth organization Hashomer Hatzair instead. He distinguished himself as a good organizer and a leader, and became an important advocate for forming of a collective antifascist youth front. Additionally, he was a fierce opponent of the pre-war anti-Semitism in Poland.

The first two years of the war.

On September 7 1939, one week after the Germans had invaded Poland, Anielewicz and his friends from the youth organization fled to the east of the country. He was hoping that the Polish army would defeat the German invaders so that they would be able to get back to Warsaw. This did not happen and on September 17, the Red Army had also invaded Poland. The west of Poland was now occupied by Germany and the east by the Soviet Union.
Anielewicz tried to set up an escape route through Romania to Palestine. However, he was arrested and imprisoned by the Soviets. After being released, he returned to Warsaw for a short while. Afterwards, he travelled to Vilnius in Soviet - occupied Lithuania.
In Vilnius, Anielewicz made contact with other members of youth organizations and political groups. He decided that a group of Jewish youths should return to Warsaw, so that they could carry on with their political activities underground in occupied Poland. Together with his girlfriend Mira Fuchrer, Anielewicz was one of the first Jews to return to Warsaw voluntarily. In the autumn of 1940, the Warsaw Jews were being transferred to the ghetto. This is why Anielewicz and his companions from Hashomer Hatzair had chosen the ghetto for their political activities. Anielewicz supported the publication of an underground newspaper and organized meetings. In the meantime, he learned Hebrew and studied history, sociology and economy. He also made illegal trips outside the ghetto in order to establish contacts with resistance groups in other ghettos.
Influenced by reports of the mass slaughter of the Jews in the East, some Jewish organizations, including Hashomer Hatzair, decided to unite to better defend themselves against the German oppressor. A combat organization has been established that resisted not only the Germans, but also the members of the Jewish Council and the Jewish police  the loathed Order Service  whose members were considered traitors of their own people, since they were obeying German orders. The German authorities were informed of the illegal activities in the ghetto. They undertook severe action against it. In April and May 1942, several round-ups were organized. With the help of the Jewish collaborators, many of the intellectuals and resistance fighters, among them the leaders of the Anti-Fascist Bloc, were arrested or murdered. In the summer of 1942, when the Germans began the deportations of the ghetto residents to the extermination camp Treblinka, the Anti-Fascist Bloc had been all but eliminated.

When the first wave of deportations began, Anielewicz was not staying in Warsaw, but in southeastern Poland, where he came in contact with other resistance groups. By the time he came back to the ghetto, between 60.000 and 70.000 Jews still remained there. That summer, a total of 310,322 Jews had been deported. His resistance group diminished and Anielewicz began reorganizing it. Meanwhile, more and more witnesses confirmed the rumors about the mass murders in the Treblinka extermination camp. Jews who remained, mostly young, fit people, were seeking revenge on the murderers of their family members. They were ready to fight against the Germans as soon as the second deportation wave began, even when it became obvious that this fight could not be won due to the German superiority in numbers. Anielewicz knew it as well, as the following quote from Emmanuel Ringelblum reveals: "[Mordechai Anielewicz] has foreseen the destroying of the ghetto and the workshops; [he] was certain that neither he, nor his fighters would survive the liquidation of the ghetto; and that they would perish like stray dogs, and that nobody would even know their final resting place".
Anielewicz had previously not succeeded in uniting diverse Jewish underground organizations, but as the result of the deportation wave of summer 1942, the readiness among these groups to cooperate had now grown. This resulted in the creation of the Żydowska Organizacja Bojowa (ŻOB), the Jewish Combat Organization, on July 28 1942. Most of the Jewish resistance groups joined the ŻOB. In November 1942, Anielewicz was appointed to be their leader. Their baptism of fire came in January 1943, when SS-Oberführer Ferdinand von Sammern-Frankenegg, SS- und Polizeiführer for the Warsaw region, was commanded to round up and deport 8,000 ghetto Jews who did not have a work pass. In spite of the Jewish Combat Organization not being well prepared for the fight, the Jews went into combat against the Germans. The Germans were caught by surprise and after four days, they retreated. However, they still succeeded in deporting between 5,000 to 6,500 Jews. Additionally, about 1,000 Jews were killed during the fights or by execution.
The Jewish Combat Organization had suffered great losses during this first uprising in January 1943. The fight was not given up however, as the retreat of the Germans had encouraged the fighters. They thought, incorrectly, that it had been the German's intention to clear the entire ghetto as early as January and that they could have repelled it.
Over the course of the next three months, Anielewicz led the intensive preparation of the ŻOB for their next battle. It took place in the spring of 1943.

On April 19 1943, the German troops arrived in the ghetto to liquidate it once and for all. The operation was led by SS-Oberführer Jürgen Stroop, the successor of Ferdinand von Sammern-Frankenegg. In spite of having more weapons and men, it took the Germans until May 16 1943 to crush the uprising. Anielewicz was proud of the performance of his Jewish Combat Organization. On April 23, he wrote in a letter: "The dream of my life has come true. The Jewish self-defense in the ghetto has become a fact and the Jewish revenge has taken real forms. I am a witness to a beautiful, heroic fight of the Jewish rebels."
Anielewicz died a few days before the end of the uprising. After a heavy fight, he moved the headquarters to the underground bunker on 18 Miła Street. On May 8, the bunker was discovered by the Germans. They blocked the five existing exits and threw gas- and smoke grenades inside. Some of the ŻOB members committed suicide, whereas others died during the battle. It remains unknown how Anielewicz met his end. 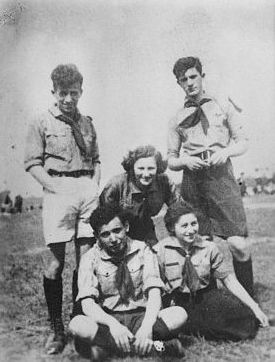 Group portrait in 1938 of members of the youth movement Hashomer Hatzair. Anielewicz is standing on the right. Source: USHMM

front
Largest Soviet ground formation. It was attached to a certain area which gave its name to the units involved. For instance the Voronezh front.
ghetto
Part of a town separated from the outside world to segregate Jewish population. The establishment of ghettos was intended to exclude the Jews from daily life and from the rest of the people. From these ghettos it was also easier to deport the Jews to the concentration and extermination camps. Also known as Judenviertel or Jewish quarter.
Jews
Middle Eastern people with own religion that lived in Palestine. They distinguished themselves by their strong monotheism and the strict observance of the Law and tradition. During World War 2 the Jewish people were ruthlessly persecuted and annihilated by the German Nazis. . An estimated 6,000,000 Jews were exterminated.
liquidate
Annihilate, terminate, destroy.
Red Army
Army of the Soviet Union.
resistance
Resistance against the enemy. Often also with armed resources.
Soviet Union
Soviet Russia, alternative name for the USSR.

- A Teacher's Guide to the Holocaust
- Deathcamps.org
- Jewish Virtual Library