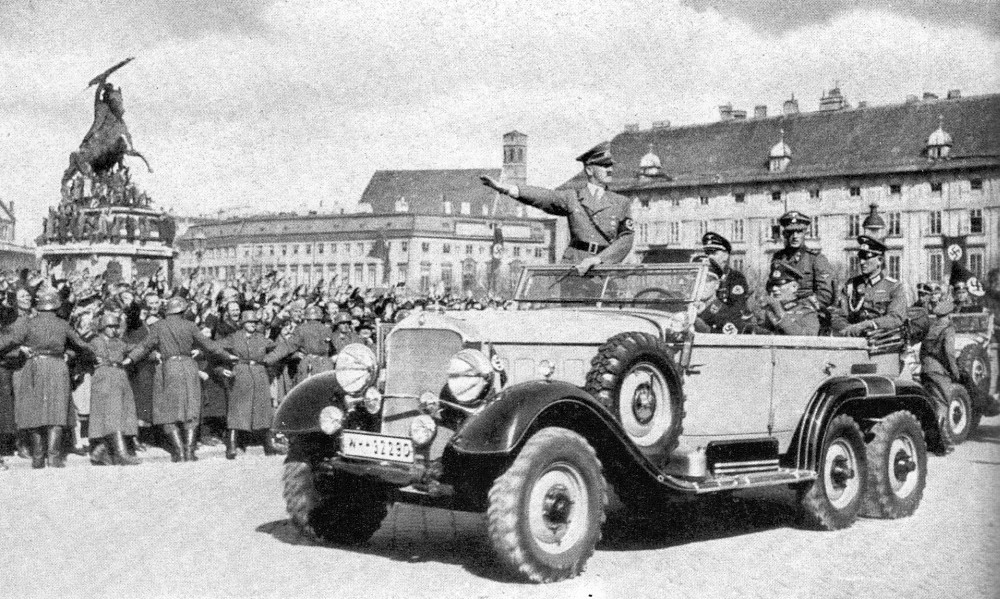 Hitler in his Mercedes in Heldenplatz in Vienna. Source: Heinrich Hoffmann / Public domain

In recent years, several old Hitler Mercedes were put up for sale for millions of dollars. The old models are a lurid but interesting investment for collectors, especially if they belonged to Hitler. In an interview in The Guardian the director of a museum of classic cars in Moscow once said that he would experience Hitler's car as a trophy, just like his hat, his swastika bracelet and his jacket that are located in another Moscow museum. He was sorry he had never managed to get a Hitler car.

Hitler's driver Erich Kempka remembered the day when he first saw one of Hitler's cars. It was 1932, and although Hitler was not yet Reich Chancellor, he did have cars at his disposal that, according to Kempka, were so expensive that he had never seen one yet in person. The car he had to drive from Munich to Berlin that day was even too big for him, so he had to put blankets on the seat to keep a good view of the road. 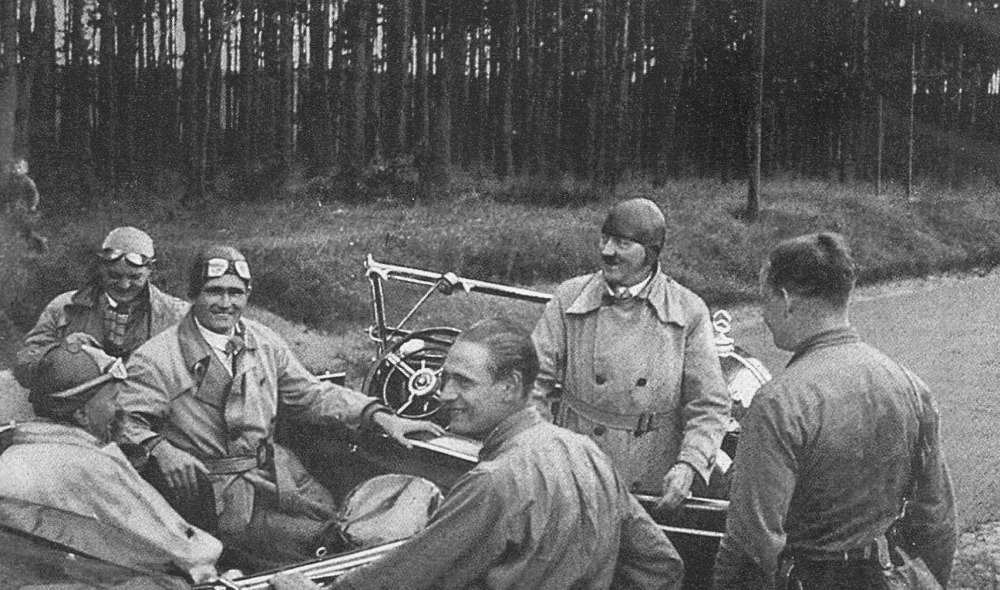 A short stop in a forest during a ride. Source: Heinrich Hoffmann / Public domain

Since the 1920s, the party financed Hitler's cars, which he never drove himself. He always had a driver. In the 1920s that was still Emile Maurice, but after he fell from favor, Kempka took over his role. Another driver was Julius Schreck. Not only was he able to drive well, but he was also very skilled at eliminating communists. In the early days of the party, gatherings often ended in brawls, and Schreck was also Hitler's avid bodyguard. Together, the two served a prison sentence in 1923 for attempting to overthrow the Bavarian government. Kempka played an important role after Hitler's death, when he had to provide the gasoline with which the corpses of Adolf and Eva Hitler were doused, after which they were cremated.

Hitler first got a car at his disposal in 1920. At first it was a car of the now unknown brand Selve, but within a year he was able to buy his first Mercedes, sponsored by rich friends and a friendly car dealer. When the party started to grow, the fleet grew. In February 1925 Hitler already bought a car for the then hefty amount of 26,000 Reichsmark. In the end, he owned several luxury Mercedes cars, but also a six-wheeled off-road vehicle like the Mercedes that was exhibited in the National Military Museum at Soesterberg, The Netherlands, in 2020. That car was not suitable for normal use. At a maximum speed of 47 miles per hour it was too slow. It was made to drive through rough terrain and therefore a convenient means of transport if Hitler wanted to follow his troops through Belgium and Czechoslovakia, for example. 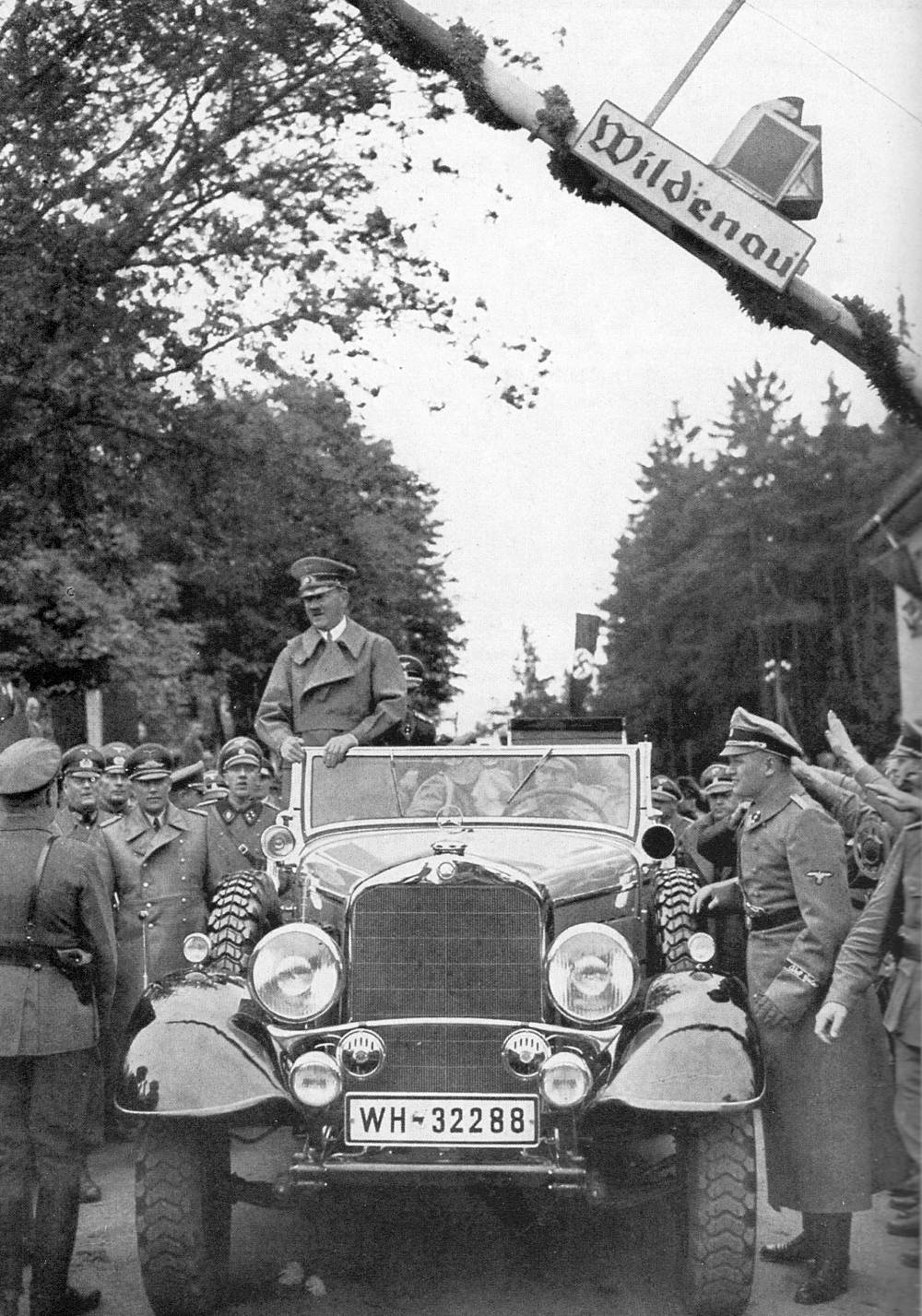 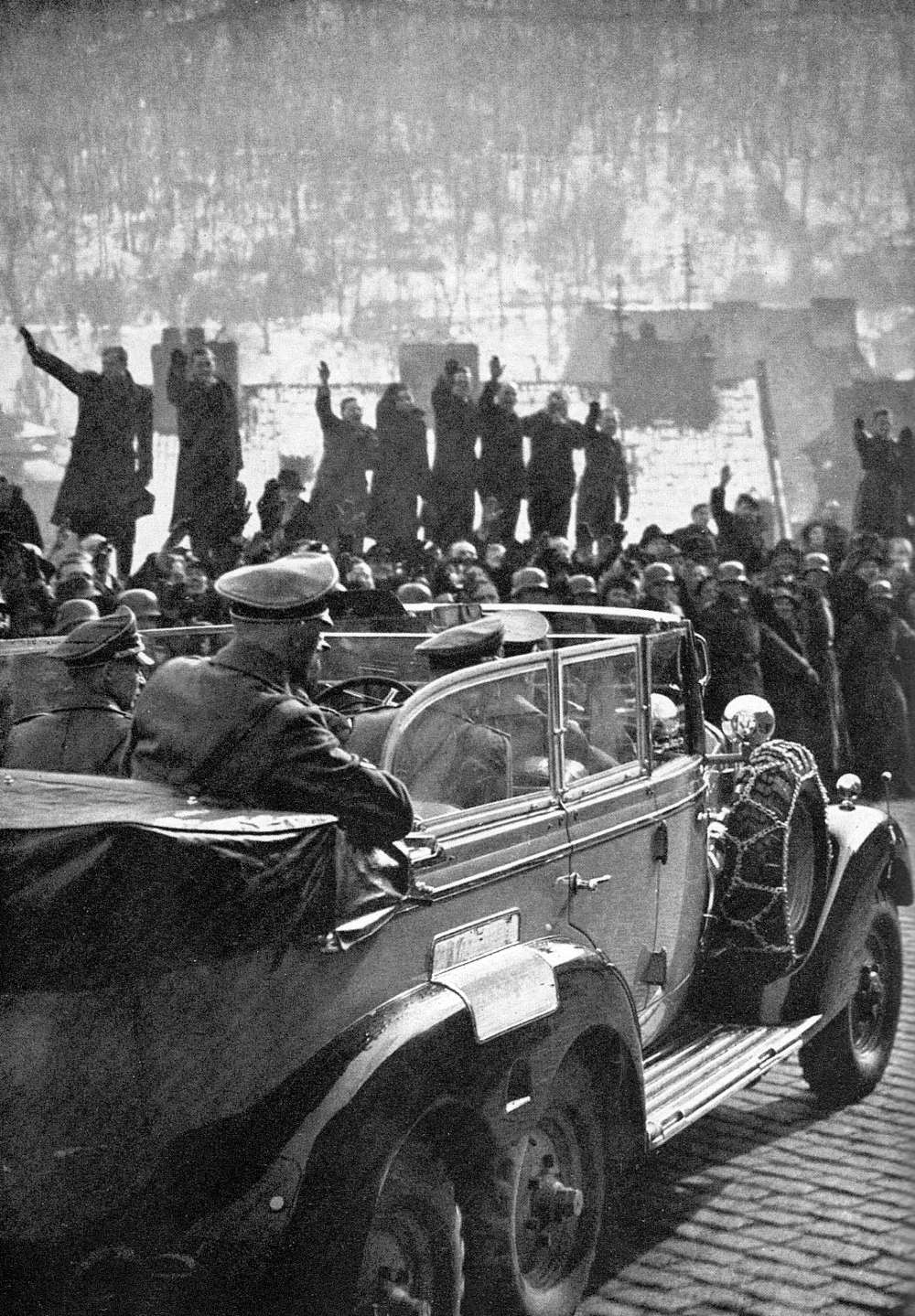 A warm welcome from his followers in Prague. Source: Heinrich Hoffmann / Public domain

In Hitlers many propaganda books, he can be seen in every corner of Europe in his Mercedes: acclaimed by crowds in Vienna, with children flocking around the car on a small country road in Germany, fallen asleep during a car ride to a political meeting, in Munich, in Nürnberg, in Berlin and of course in the six-wheel variant in just occupied Prague.

Hitler was proud that he had never had an accident. He himself said that he always insisted that his drivers adjust their speed "to the view they had on the road". "If a child walks on the road and gets hit", he reasoned, "its not the childs fault, because a child doesnt think. The driver has to think".

No matter how much Hitler is despised, no doubt the cars have a certain historical value. However, the Allied soldiers were not all aware of this at the end of the war. The cars were simply deployed in the army and photos show that they were not handled too carefully. Undoubtedly several of Hitler's cars have ended up on the scrap heap.

How many of Hitler's cars survived the war is difficult to determine. The Russians dragged everything from Germany back to their homeland, including the cars of high ranking Nazis. It is unclear whether Hitler's Berlin Mercedes were also included, but Lomakov's Museum of antique autos and motorcycles in Moscow does contain cars belonging to Hermann Göring, Joseph Goebbels and Martin Bormann. There is a story dating back to 2009 about an unknown Russian who is said to have bought five luxury cars, including a Mercedes Benz 770K from Adolf Hitler. He is said to have acquired them through the Düsseldorf dealer Michael Fröhlich, who would not say anything about the price or about the new owner of the car. Probably more old Hitler Mercedes cars ended up in similar ways with unknown private collectors.

The Americans too brought back all kinds of things to their country, including the expensive Mercedes of Hermann Göring, which ended up in the Canadian War Museum in Ottawa in 1970. The American sergeant Joe Azara had found the car on a train carriage near Salzburg in 1945. While being shot at by German soldiers, he managed to get the car, but because it soon got engine problems, Azara had to replace the engine with that of another Mercedes. It is suspected that he used the engine of a car that was parked at Hitler's villa "Berghof" on the Obersalzberg. In 1945 the car, with the new engine, was shipped to Boston, where it immediately was heralded in The Boston Daily Globe as "Göring's car". After all kinds of wanderings, confusion and discussion about the identity, the original number plate of the car turned out to be painted over. Another number emerged from behind the number WL-148697: IA-148697. And that was a number from one of Hitler's cars. The car, which had been in the museum in Ottawa for years, turned out not to have belonged to Goering, but to the highest ranking Nazi himself.

Hitler's cars can be recognized in various ways. Part of them had number plates that started with the combination IA-148 and there are lists of those. But also of the cars with other number plates it can still be determined whether they belonged to Hitler, and not only by looking at old photos. The Mercedes company knows exactly which serial numbers Hitler's cars had. 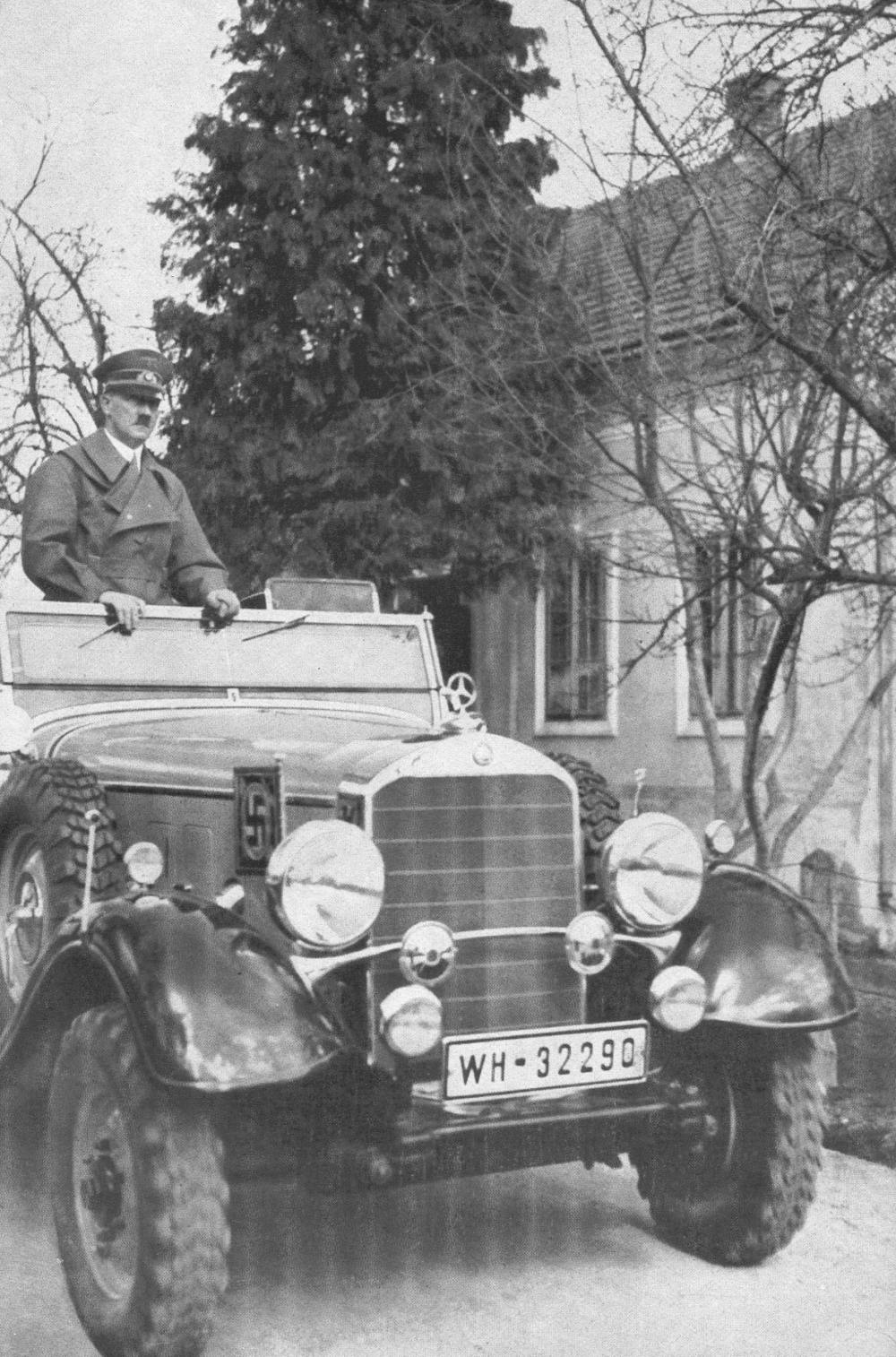 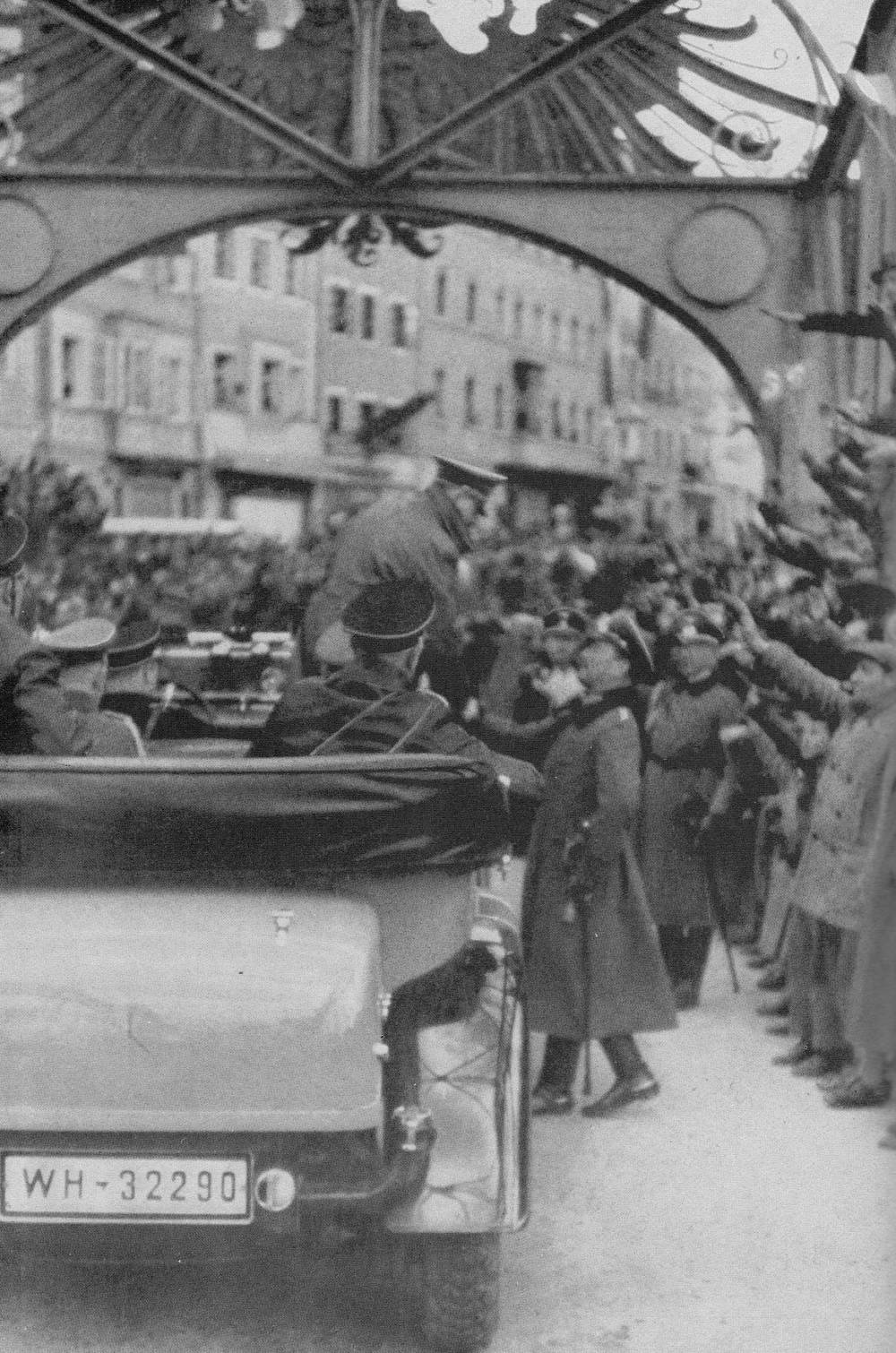 Hitler during a visit to his birth place Braunau am Inn. Source: Heinrich Hoffmann / Public domain

Some of the luxury cars can also be recognized from the interior. Hitler, who was always sitting next to the driver, had a platform under his seat on which he could stand if he wanted to greet crowds. In addition, if he stood upright in the car, he was not supposed to fall over. That is why a handle was attached to the windshield, which he could hold on to.

Hitler's cars share in the negative myth that Hitler has become. For example, museum director Lomakov told The Guardian that he believed that a Hitler Mercedes once bought by a Russian was cursed. He was sure that almost everyone who owned the thing died soon after.

That there is such a curse is nonsense of course, but Mercedes does have a dark history that people prefer not to talk about. And one could call that a curse that has haunted the company ever since the war.

You will notice that Mercedes has a hard time giving history a place when you visit their website. For years, the historical overview on their website stops in the year 1926. Of course there are old models and models from after 1926, but nowhere you will find anything about Hitler, not even under the heading "personalities". 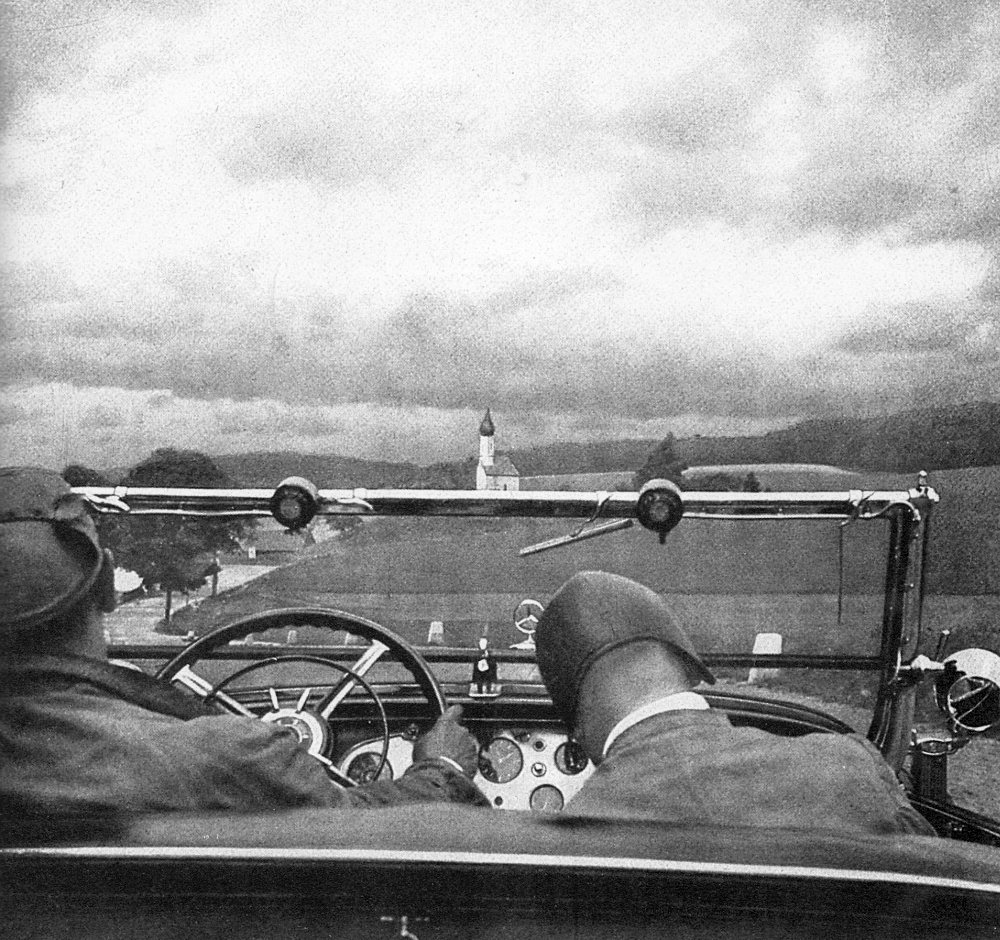 Probably there will never be a complete historical overview on the Mercedes website. You can contact historians or one of the museums where Hitler's Mercedes cars are exhibited. And they are not all as far away as the Lyon Air Museum in Santa Ana in the United States or the Canadian War Museum in Ottawa. They are also much closer, for example in the Musée Henri Malartre in Lyon, France and in the Auto and Technology Museum Sinsheim in Germany. Or temporarily in Soesterberg, The Netherlands, in 2020.

Berghof
A villa hidden deep in the Alps built at the top of the Obersalzberg near Berchtesgaden. This villa was property of Hitler and centre of the Alpenfestung. The villa has an enormous complex of tunnels with a length of nearly 11 km. From the Berghof the Third Reich was ruled by Hitler and his close companions. Eva Braun, Hitlers companion, spent a lot of time there.
Nazi
Abbreviation of a national socialist.
propaganda
Often misleading information used to gain support among supporters or to gain support. Often used to accomplish ideas and political goals.
Reich Chancellor
Name of German head of state. From 1933 till 1945 Adolf Hitler was Reich chancellor of Germany.
swastika
Equilateral cross, symbol of Nazi-Germany. 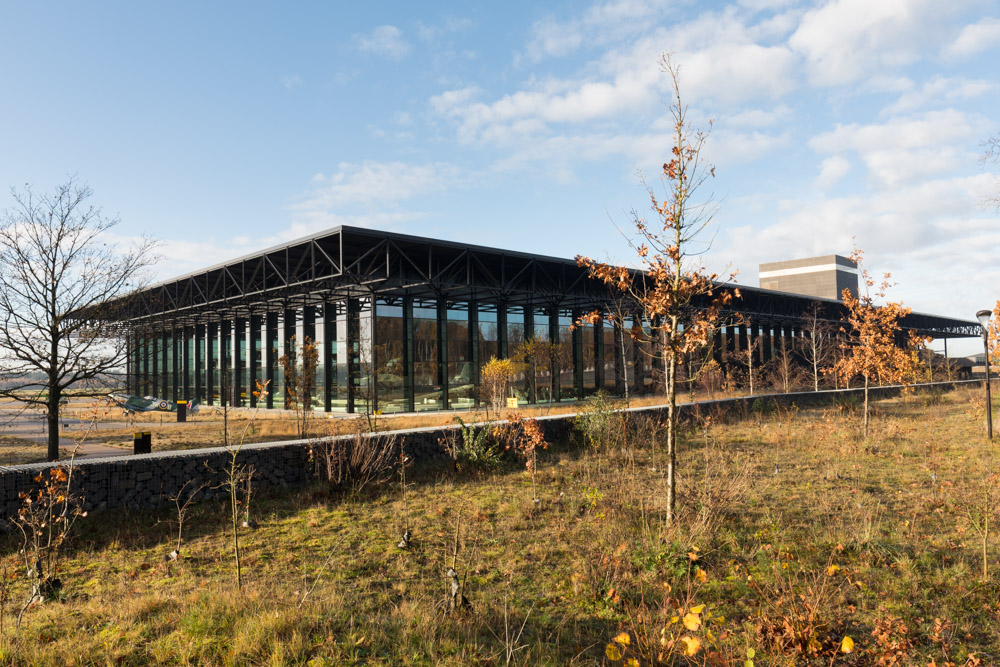 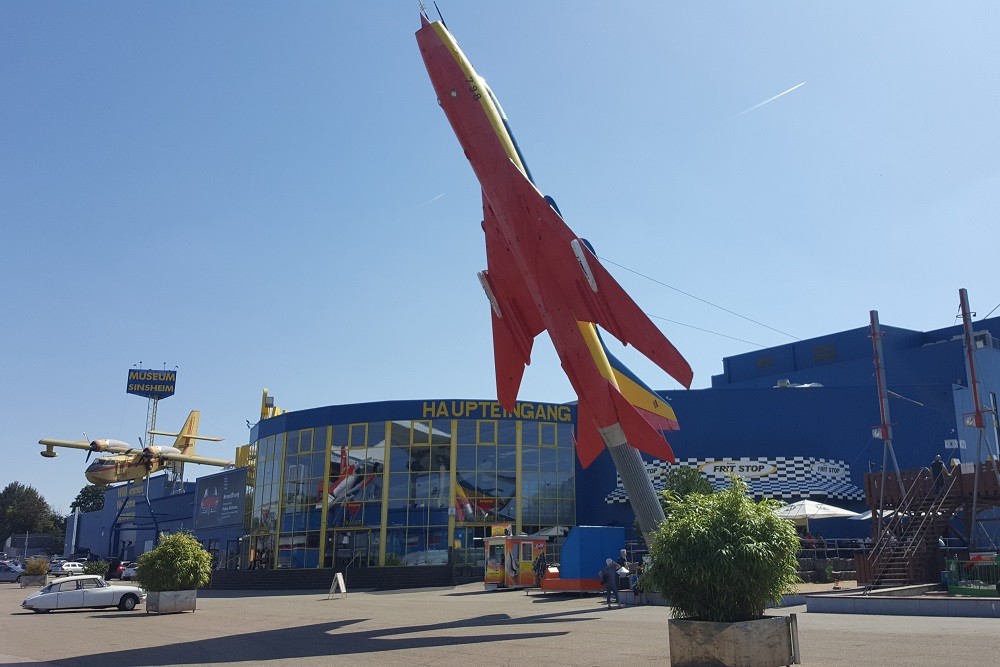 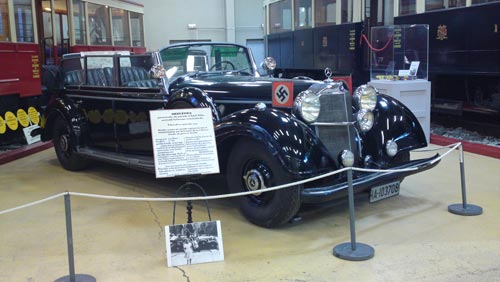