The "Bewährungs- und Kampfabzeichen der Kleinkampfmittel" was instituted November 30th, 1944 by the Supreme Commander of the German Navy, Karl Dönitz. The "Kampfabzeichen" has seven grades, the "Bewährungsabzeichen" only one. The decoration could be awarded to any member of the German Navy participating in the so called "Kleinkampfverbände." (small combat units)
These units were established April 1944 under the command of Rear-Admiral Hellmuth Heye for testing and deployment of new combat techniques within the German Navy. These units usually employed vessels like the Marder, Neger, Seeteugel and Biber.
The general recommendations for being awarded the Bewährungsabzeichen or one of the grades of the Kampfabzeichen were dignity and good leadership. All decorations used an image of a sawfish; the Bewährungsabzeichen and Grade 1 through 4 of the Kampfabzeichen being formed by a gold coloured, embroidered sawfish on a circular background of blue felt. On the Kampfabzeichen, the sawfish was hemmed in by a knotted, gold coloured cord and, depending on the grade, embroidered swords in gold. This decoration was worn on the right upper arm. Grades 5 through 7 took the form of a metal clasp, depicting the sawfish with a knotted, winding cord in bronze for the 5th Grade, in siver for the 6th and in gold for the 7th. These decorations were worn above possible other decorations on the left breast pocket.
As far as known, the Bewährungsabzeichen and grades 1 through 4 of the Kampfabzeichen have actually been awarded. No details are known about the other grades. Specimens of all decorations produced in the course of World War Two are known up to Grade 6. 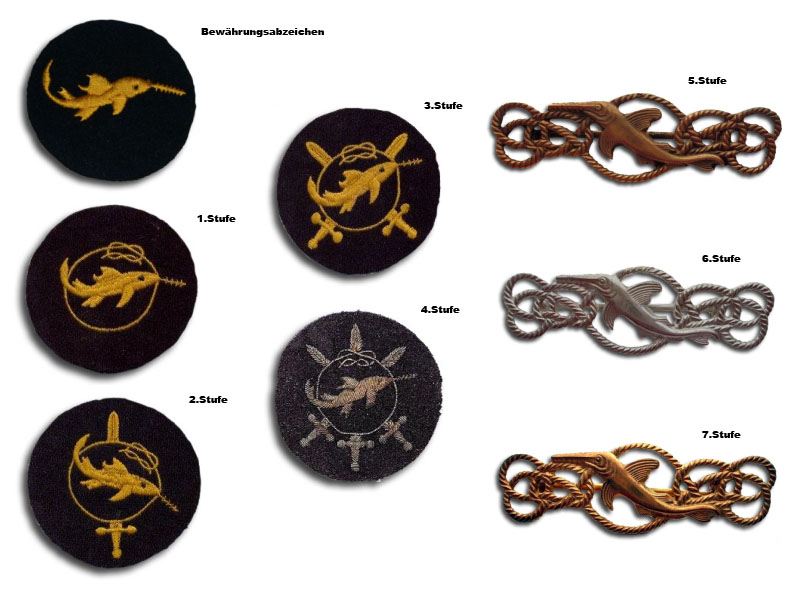