The Medal Za Warszawe 1939-1945 (Medal for Warsaw 1939-1945) was instituted op October 26th 1945 by decree of the Council of State PNR (Krajowa Rada Narodowa). The medal was to be awarded to all soldiers and citizens that took part in the defence of Warsaw during September 1939, all participants in Warsaw underground and in the uprising in 1944 and those who took part in the release of the city from the Fascist-German aggressors during January 1945. Also foreign citizens could be awarded.
A total of 131242 of the medal were awarded. One of the first people to be awarded the medal was the first President of Poland, B. Bierut and some high ranking Polish Military.

The bronze medal is round with a diameter of 33 mm. On the front there is an image of a siren with a shield in the left hand and a sword in the right hand. These represent the coat of arms of the city of Warsaw. On the top there is the inscription "1939" and "1945" and on the bottom " ZA WARSZAWE" (For Warsaw). On the obverse can be found the words "RP-OBRONCOM-BOJOWNIKOM-OSWOBODZICIELOM" (To the defenders, warriors, liberators), together with oak leaves and three acorns.

The Ribbon is red with two longitudinal bands along the sides that represent the colours of Warsaw. 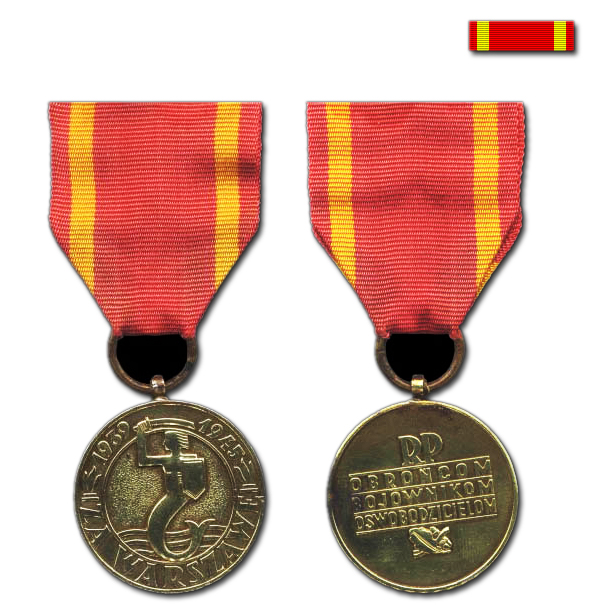