The Most Distinguished Order of St. Michael and St. George was instituted in 1818 by King George IV and was originally reserved for inhabitants of the Ionian islands and Malta which came under British rule in 1814. In 1897 King William II instituted three classes of Knights and from then on, any UK citizen is eligible for the Order. Nowadays, the Order is usually awarded to high ranking Civil Servants, members of the Diplomatic Corps or those who have seen distinguished service in the Commonwealth.
The badge depicts St. Michael encountering the devil, emblazoned with the motto: "Auspicium melioris aevi" (Augury of a better age); the reverse side depicts St. George and the dragon. On the collar the Maltese cross and the winged lion of St. Mark. The ribbon is 1.25" wide with three vertical stripes of equal width, the central stripe is coloured red, the outer two are coloured blue.
The three classes are: Knight/Dame Grand Cross -GCMG-; Knight/Dame Commander -KCMG/DCMG- and Companion -CMG.
Conferment of the two highest ranks entails admission into knighthood and the Order is restricted to 120 GCMG's, 390 K(D)CMG's and 1775 CMG's. Foreigners who receive the Order are known as "honorary members". The abbreviations are popularly known as God Calls Me God for GCMG, Kindly (or Do) Call Me God for
K(D)CMG and Call Me God for CMG. 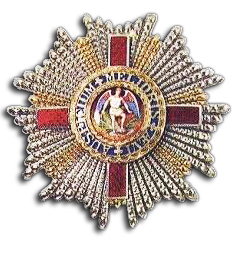 Grand Cross of the Order of St Michael and St George (GCMG)In the database: 36
Issued:unknown

Commander of the Order of St Michael and St George (KCMG/DCMG)In the database: 40
Issued:unknown

Companion of the Order of St Michael and St George (CMG)In the database: 64
Issued:unknown