The Royal Victorian Order -RVO- was instituted by Queen Victoria in 1896, women were admitted into the Order in 1936 by King Edward VIII. The Order is awarded for personal service to the monarch. As it is a family Order, conferment is the sole discretion of the British sovereign.
There are five classes: Grand Cross Victorian Order -GCVO-; Knight (Dame) Victorian Order -K(D)VO-; Commander Victorian Order -CVO- and Member Victorian Order -MVO- 4th and 5th class. Foreigners who receive the Order are known as "honorary members". Conferment of the two highest classes entails admission into knighthood.
The badge of the Order depicts a Maltese Cross with the motto: "Victoria", the initials "VRI" and the Imperial Crown. The ribbon is 1.25" wide and coloured purple; at either edge there are two narrow vertical stripes of red with a central white stripe as wide as the red.
Associated with the Order is the Royal Victoria Medal which is awarded for military service to the monarch. 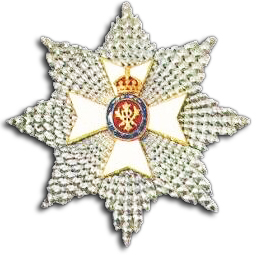 Commander of the Royal Victorian Order (CVO)In the database: 24
Issued:unknown