The Knights Cross of the War Merit Cross with Swords (Ridderkreuz des Kriegsverdienstkreuz mit Schwertern) was also instituted on 19-08-1940 and is identical to the Knights Cross without Swords except that in this version there are two swords placed diagonally through the Maltese cross. The Knights Cross was struck of genuine silver, with a silver grade variying from .800 to .950. In some cases the mint mark is stamped on the V, placed upside down on the lower arm of the cross. The weight of this award is 1.36 troy ounces. This award was meant for military, administrative personnel and civilians who had served bravely during combat or in the war effort, but which did not merit a Knights Cross of the Iron Cross. The Knights Cross could not be awarded unless the candidate had already been awarded the War Merit Cross First and Second Class with Swords. The Knights Cross outranked the German Cross in silver (Deutsche kreuz in silber) but was lower in rank than the Knights Cross of the Iron Cross. It is estimated that during WWII period, 211 Knights Crosses with Swords have been awarded, however not every award was published to protection the recipient's anonymity and/or his work. This applied to Dr. Ing. Ernst Blaicher, who was awarded the RK on 15-11-1943 for his achievements in tank production. Another case is that of Othmar Wolfran. (Luftwaffe Oberstleutnant) He was employed in the Generalstab der Deutschen Luftwaffe in Finnland. He was recalled to Berlin in the last days of the war, where he received the Knights Cross, he was subsequently promoted to a new post and shortly after was taken prisoner of war by the Russians.

The Knights Cross was awarded in a blue box, with a dark bleu velvet base with a hollowed out space to accomodate the cross and hanger. The lid was covered with white silk and the space above the hollow was intended to accommode the neck ribbon.

The criteria to be awarded the Knights Cross was that the recipient be previously awarded the War Merit Cross first and second class and that a recommendation be sent by the OKW or a State Minister to the Reichskanzlei for Hitler's personal approval. 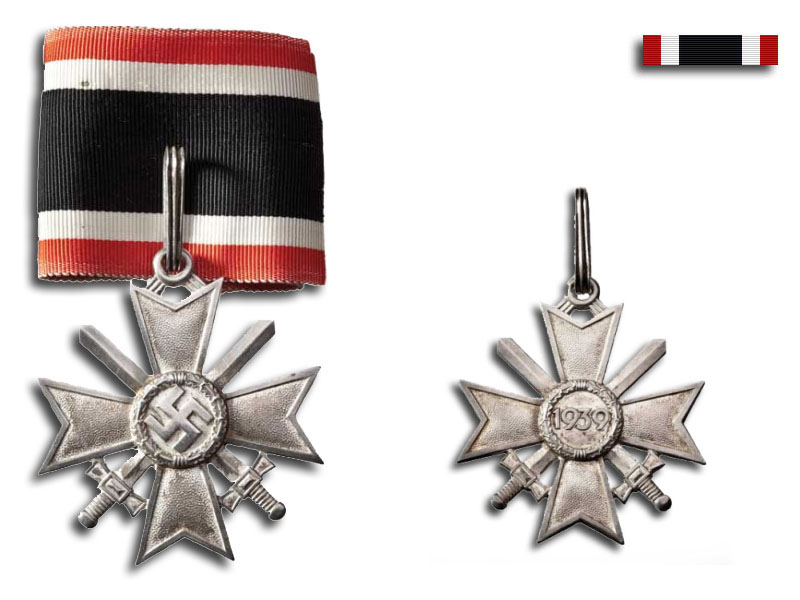