The official name of this decoration was: Tapferkeits- und Verdienstauszeichnung für Angehörige der Ostvölker" (Medal for Gallantry and Merit for Members of the Eastern Peoples). The award was divided in two classes; the First Class consisitng of a version in Gold and Silver, the Second Class in Gold, Silver and Bronze. Both classes could be awarded in two variations, one with swords for gallantry and one without swords for merit.
The award was instituted on July 14th, 1942. Eligible for this award were members of units made up of so called Eastern Peoples, namely Turks, Cossacs, Crimea-Tartars, Schutzmannschaft-Battalione (Guard battalions), Sicherungsverbände (Security units) made up of Eurasian peoples operating in the operational area of their origin and Eurasian members serving voluntarily in German units. On September 7th, 1942, it was emphatically stated that conferment was restricted to Eastern Peoples exclusively and not to members of the Wehrmacht.
From October 29th, 1942 onwards, German military personnel serving in units made up of said peoples, were eligible for the Medal for Gallantry with Swords, the main requirement being that they were effectively serving in these units. To become eligible for the 2nd Class in Silver, one had to have received the Iron Cross 2nd Class (EK 2) or the EK 2 Clasp firstly or simultaneously; to be eligible for the 1st Class, one had to have received the Iron Cross 1st Class (EK 1) or the EK 1 Clasp firstly or simultaneously. From May 1943 onwards, German military personnel serving in Schutzmannschafts-Bataillone and units of the Sicherheitspolizei (Security Police, SIPO) and SD (Sicherheitsdienst, Security Service) became eligible as well.
February 14th, 1944 it was decreed that German military personnel in units consisting of Eastern Peoples, in possession of the KVK 1 m. Schwertern and KVK 2 m. Schwertern (Warcross for Merit 1st Class w. Swords and 2nd Class w. Swords) became eligible for the "Verdienstauszeichnung" (decoration for Merit) 1st and 2nd Class respectively as well. 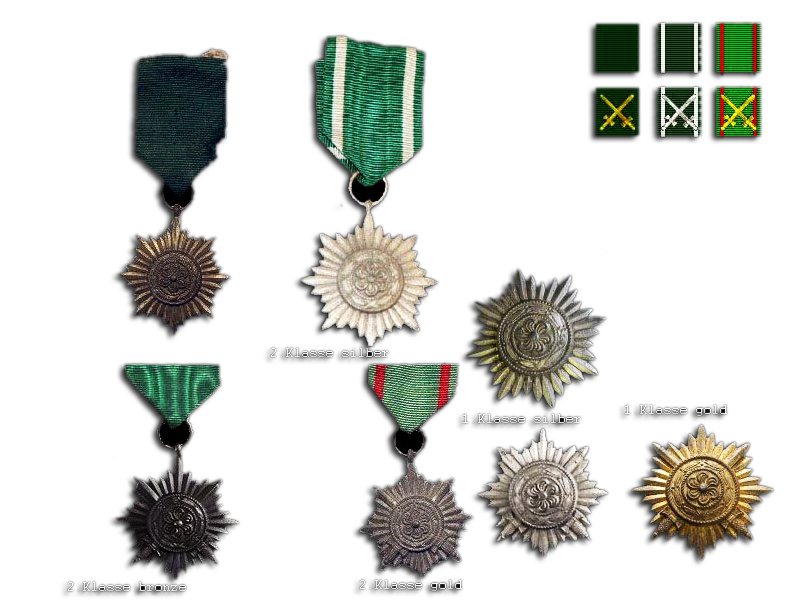