The German Cross (Deutschen Kreuz) is instituted by Hitler on 28-09-1941. He thought that there should come an extra award to honour the increasing number of military achievements at the front. In Hitlers opinion was the gap between the Iron Cross 1st Class (Eisernes Kreuz 1 Klasse) and the Knights Cross of the Iron Cross (Ritterkreuz des Eizernen Kreuzes) and between the War Merit Cross 1st Class (Kriegsverdienstkreuz 1 Klasse) and the Knights Cross of the War Merit Cross (Ritterkreuz des Kriegsverdienstkreuzes) to big and to be able to reward the achievements of his soldiers, he let Pr. Klein of Munich design this new award.

The German Cross was worn on the right breast pocket and than above the Spanish Cross (Spanien-Kreuz) if the recipient owned this award. When a recipient was awarded with both German Cross versions, than they were worn underneath each other instead of next to each other. The German Cross was awarded in a black square box with a black velvet base and the lid was covered with white silk. On the outer side of the lid is a fine golden or silver line embossed to represent the corresponding version. Together with the award came an award document. This is a large document with at the top a facsimile of the German Cross. There are two different text versions on the German Cross in Gold and Silver documents and its also possible that the large embossed eagle in the lower left corner is replaced with a simple ink stamp. The awarding was also noted in the Soldbuch. Some know producer are; (1) Deschler & Sohn of Munich, (4) Steinhauser & Lück of Lüdenscheid, (20) C.F. Zimmermann of Pforzheim, (21) Gebrüder Godet & Co of Berlin, (134) Otto Klein of Hanau. 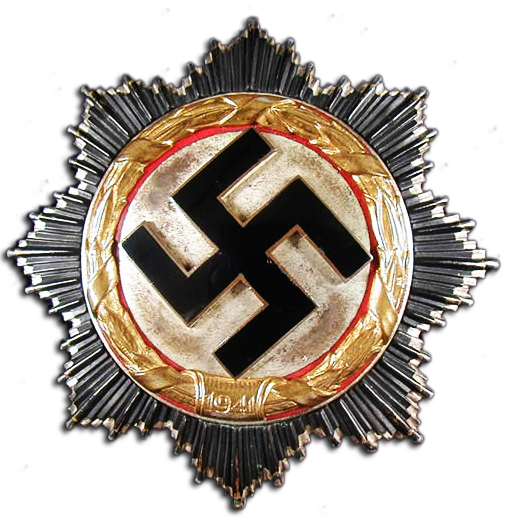 Deutsches Kreuz in GoldGerman Cross in gold
In the database: 26226
Issued:unknown

Deutsches Kreuz in SilberGerman Cross in Silver
In the database: 1166
Issued:unknown