In memory of a Polish prisoner of war

"Na pamiatke od polskiego jenca wojennego"  In memory of a Polish prisoner of war, that's what Lieutenant Franciszek Bodzioch wrote to Mrs. Woerdeman on March 11, 1942. Across it a stamp with "Geprüft Oflag II E 15". The card had passed censorship.

Johanna (Ans) Capel was born on April 11, 1912. She married Henricus (Han) Maria Antonius Woerdeman. Han, born on December 7, 1908, on September 28, 1938, and would later become a well-known general practitioner in Valkenswaard. Ans Woerdeman came into contact with the Polish prisoner of war after a call from the Red Cross. She exchanged a number of letters with him and sent a parcel every now and then. Bozioch's notes were short, there was not much space on the cards. They also do not provide much information, which probably would not have passed the censorship. The notes are interesting, they provide us with a face to a man who was already taken prisoner in 1939, and who remained throughout the war. 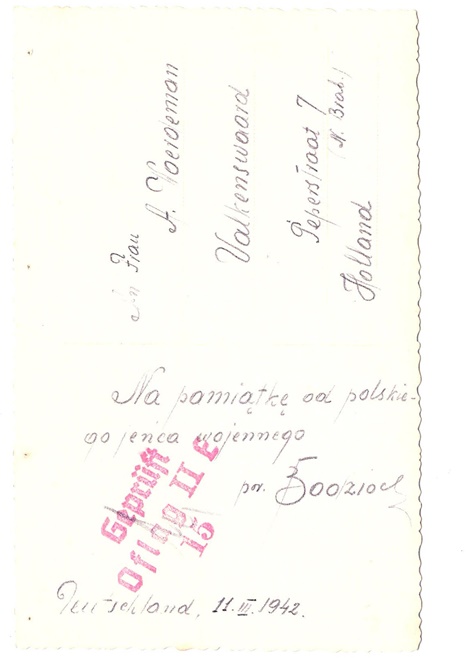 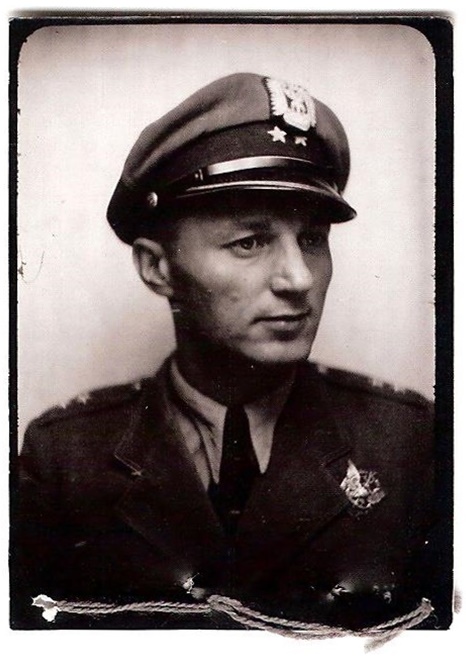 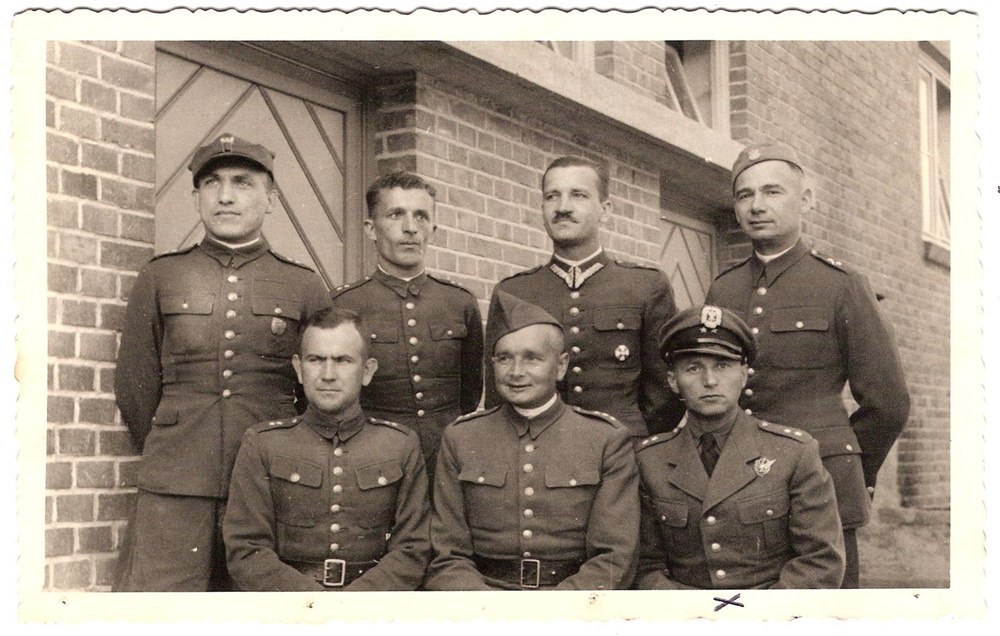 Franciszek Bodzioch (bottom right), Ad Hermens Collection
Franciszek Bodzioch was born on February 23, 1908, in the town of Dziekanowice in the Wielicki district near Kraków. He probably first worked as a teacher. He became a reserve officer in the army, first as a second lieutenant in 1932 and later, in 1936, as a lieutenant. At the time of the German invasion on September 1, 1939, he was serving with the 4th company of the 1st balloon battalion (4 Kompania Balonów Obserwacyjnych, 1 Battalion Balonowy). This battalion was equipped with observation balloons, in which Bodzioch served as an observer.

He was captured on September 9, 1939, near Łowicz. He ended up in the prisoner of war camp for officers Oflag II-A in Prenzlau. On February 24, 1941, he was transferred to Oflag II-E in Neubrandenburg, and on January 20, 1944, he was transferred again to Oflag II-D in Gross Born (now Borne Sulinowo in Poland). He presumably remained there until the war ended.

The letters we have come from the collection of Ad Hermens from Geldrop. He received them in 1989 from Ans Woerdeman himself. She handed them over so that these "sentiment-laden objects are preserved and preserved for the future." The first note we have from Bozioch is from December 13, 1941. In it he thanks Mrs. Woerdeman for a second package she had sent. He apologizes because writing long letters is prohibited. He also introduces himself a bit: "I am a reserve officer (aviator) 33 years old, single, born in Krakow. I am not a pessimist and obscure - on the contrary - with a cheerful and happy character." Three months later, he sent the note "In memory of a Polish prisoner of war".

In October 1942, Bodzioch writes that one of the packages, containing sports shoes, had not arrived. He still had a request if she could send in good bridge cards, so they would have something to do in the winter. He also sent his last photo to her. On December 16 he wrote that the bridge cards had been received; the apples in the same package "schmeckten ausgezeichnet" - tasted excellent. It is noteworthy that the longer texts are written in German, but some cards, especially Christmas wishes, are written in Polish.

On December 25, 1942, he sent another Christmas card; "warm Christmas and New Year's greetings". These Christmas cards were made by the prisoners themselves. It is the last thing Mrs Woerdeman has heard from him. As indicated above, he was moved to another camp a year later. Unfortunately, it is not known how things went for him. 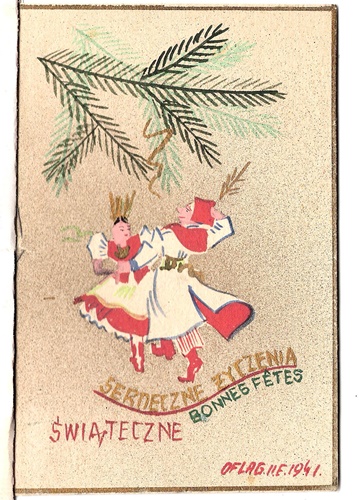 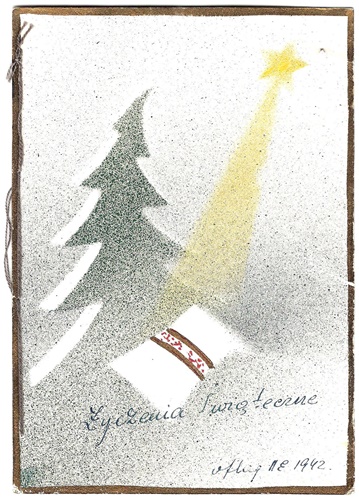 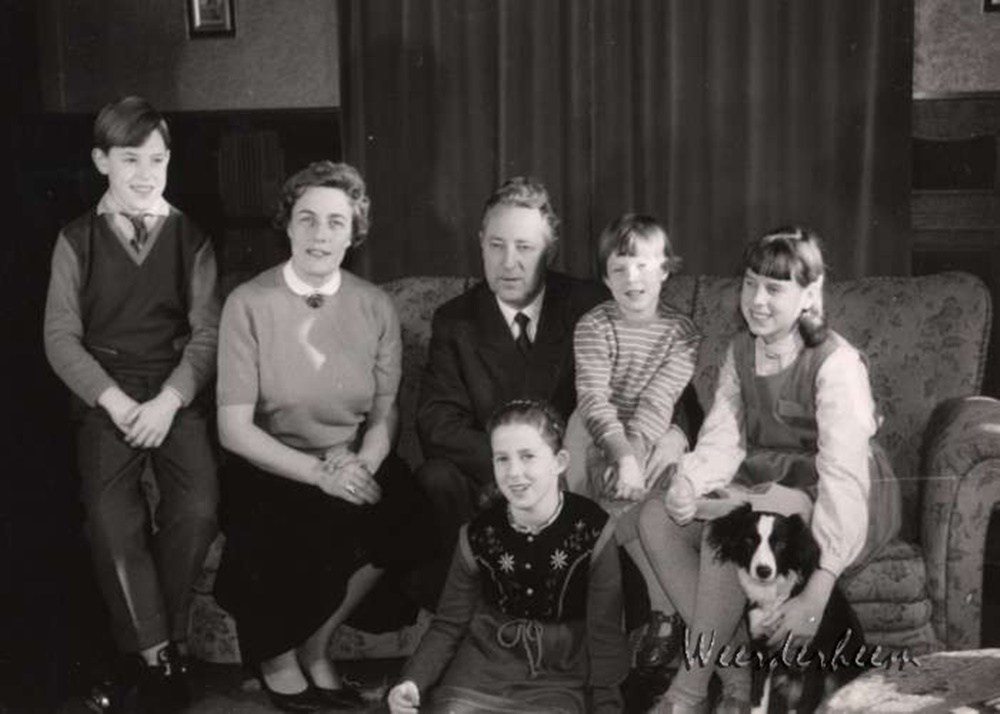 Woerdeman-Capel and his family, Ans Woerdeman second from the left. Source: Heemkundekring Weerderheem
In her letters to Ad Hermens, Ans Woerdeman indicates that she came into contact with Bodzioch after an appeal from the Red Cross. They were "not really 'scared' yet - there were no hostages yet; and not so many harsh punishments." She, therefore, ventured "sending correspondence and parcels to an individual Polish POW officer. He was allowed to write back under strict censorship." She also sent back a picture of herself, which was something she worried about later in the war. "That I was not comfortable with that at the time, in that photo of me, far away in the oh so hostile territory ...! With name and surname of course..."

The entire story still raises questions that unfortunately must remain unanswered. Why was the contact broken? Did Bodzioch survive the war? Ans Woerdeman assumed that he had not survived the war. Otherwise, he would have written to her "in freedom" after the war. Ans Woerdeman-Capel died on December 20, 2009, and is buried with her husband in Valkenswaard.

New information tells us that after the war, Bodzioch got married and had three children. He died on February 8, 1971. 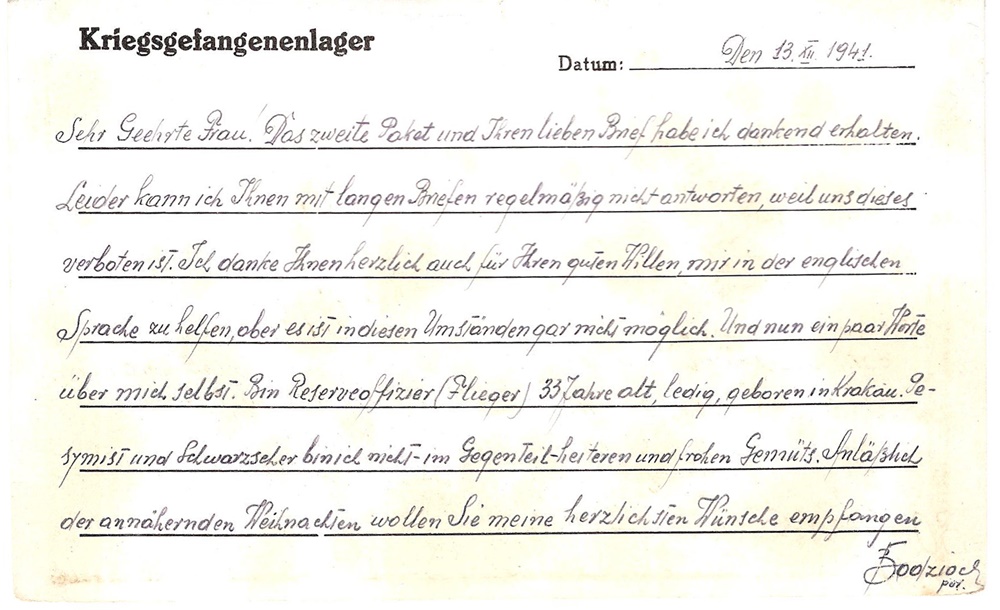 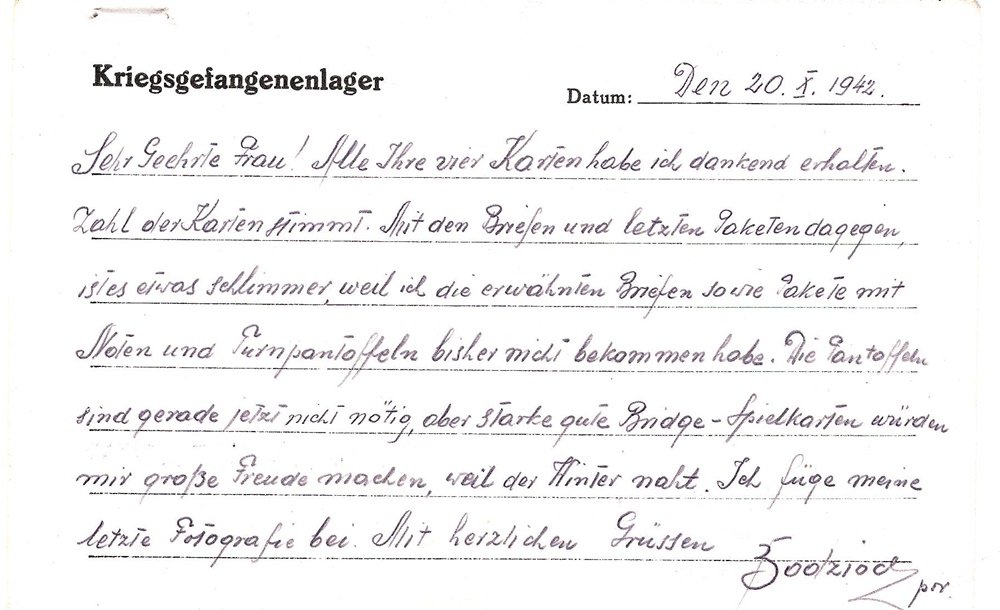 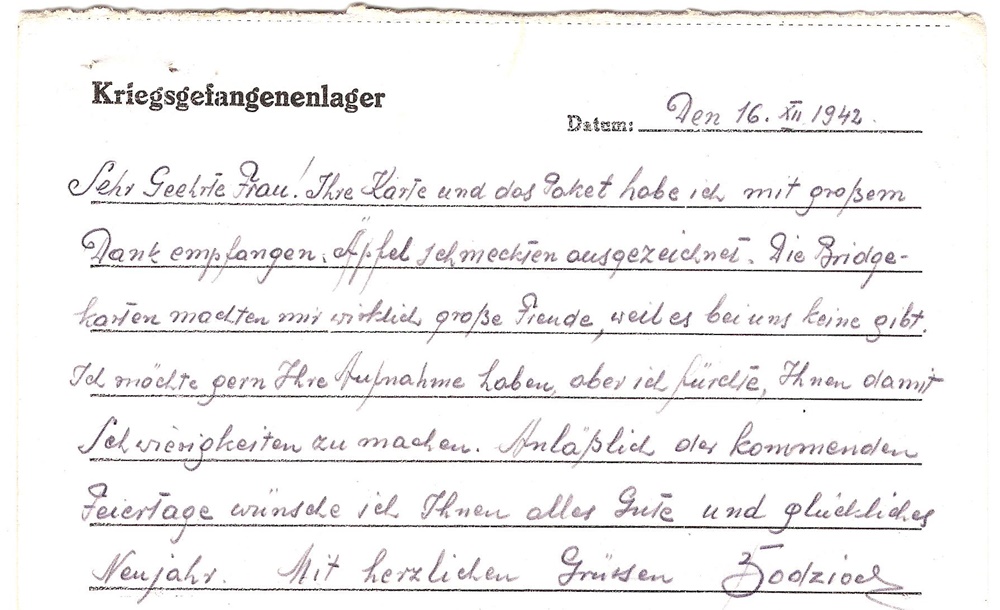 Three cards written by Bodzioch, Collection Ad Hermens
Should you have more information in any way? Then contact us!