Finally reached the rank of Generalmajor.

On the 10.08.1943 Major König and his Regiment were in position south of Dmitrowsk. On this day he made the independent decision to take up the defense of this city, and in doing so he prevented its swift capture by the Soviets. This in turn was decisive for the continuation of the planned withdrawal by the XXXXVI. Panzer-Korps.

Later, on the 27.08.1943, König and his Regiment became encircled in the area Borissowo-Lemeschok after the right neighbouring division (251. Infanterie-Division) lost the city of Ssewsk. Major König held the lynchpin of the ring against 18 hostile tanks with mounted infantry. A new attack by 22 T-34s was also held off. In total Major König and his men were able to hold out for almost 2 days despite the intense close combat, the loss of their AT weapons and almost all officers, and an ammunition shortage. Finally, at 19:00 on the 28.08.1944, the Regiment was able to break-out at a point about 3 km west of Sswetlana Poljana with the help of elements from the 4. Panzer-Division.

Awarded for his seemingly impossible achievements during the retreat of the 14. Infanterie-Division from the jaws of Operation Bagration. Beginning from the Tschaussy sector, his Regiment conducted a desperate retreat via Tscherwen (01.07.1944), over the Swislotsch bridge southeast of Minsk (02.07.1944), over the Ptitsch bridge south of Minsk (03.07.1944), to Stolpce (04.07.1944) and then further on via Grodno (08.07.1944) and finally the area around Goldap (20.07.1944). In all this time the Regiment had to give all that it had to survive, and their relative success in doing so was no doubt due to the efforts of its commander. 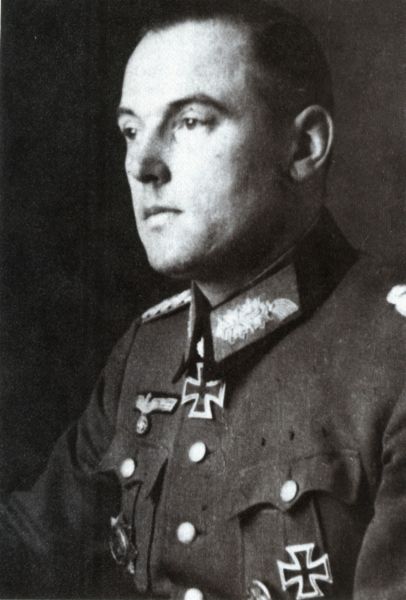