Citation:
"From 22nd April, 1943, Captain the Lord Lyell commanded his company with great courage, ability and cheerfulness. He led it down a slope under heavy mortar fire to repel a German counter-attack on 22nd April, and led it again under heavy fire on 23rd April in order to capture and consolidate a high point, which was held through a very arduous period of shelling, heat and shortage of water.
In the evening of 27th April, Lord Lyell's company, while taking part in an attack, was held up by fire from a position which consisted of an 88-millimetre gun and a heavy machine-gun in separate pits. Lord Lyell led four men to attack this position; he was far in front of the others, and destroyed the machine-gun pit with a hand-grenade. Then, aided by covering fire from the only uninjured man of his party, he attacked the 88-millimetre gun pit before its crew could fire more than one shot. He killed a number of them before being overwhelmed and killed himself. The few survivors withdrew and his company was able to advance and take its objective. Lord Lyell's outstanding leadership, gallantry and self-sacrifice enabled his company to carry out its task, which had an important bearing on the success of the battalion and of the brigade 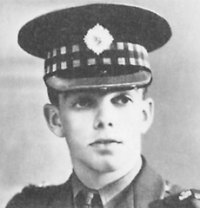