Vincenz Müller started a career in the army right after school. During the First World War he served as a Lieutenant to the German military mission in Turkey. After World War One he joined the Reichswehr and served as Zugführer (Squad leader) with a Pioneer Bataillon (Engineer Batallion) in Ulm and with the Wehrkreiskommado (Army Regional Command) in Ulm and the Wehrkreiskommando V in Stuttgart. In 1923 he was transferred to the Reichswehrministerium ( Imperial War Department) in Berlin. Until 1933 he served on the staff of Kurt von Schleicher. In the meantime, Müller had risen to Hauptmann and went to the staff of Befehlshaber Wehrkreis II (Commander of Army Region III) as Kompaniechef 7 Pioneer Batallion (Company Chief of 7 Engineer Batallion). From 1933 to 1935 he acted as executive to the mobilisation staff within the Wehrkreiskommando VII in Munich and until 1937 as head of the Gruppe Mobilmachung Generalstab des Heeres (Section Mobilisation of the Army General Staff.)*
The beginning of World War Two saw Müller as 1 Generalstabsoffizier (1st Officer General Staff - Ia) of Heeresgruppe 2 (Army Group) in Kassel. Here he was promoted to Oberst (Colonel). He served as Chef des Stabes (Chief of Staff) in the ArmeeOberKommando AOK 17 (Supreme Command of the Army) in Zakopane in Czechoslawakia. His promotion to Generalleutnant (Lieutenant-general) followed in 1943 and the assignment as Kommandeur 56 Infanterie-Division (Commander of 56th Infantry Division) with the 4. Armee (4th Army). Together with the 4. Armee he became a prisoner of war in the Soviet Union. He was sentenced for warcrimes but joined the Nationalkomitee Freies Deutschland (National Committee for a Liberated Germany) and the Bund Deutscher Offiziere (League of German Officers) and took a re-educatiuon course.*
After his release from imprisonment in 1948 he joined the National-Demokratische Partei Deutschlands (National German Democratic Party) the NDPD in East-Germany and was vice-chairman of this party between 1949 and 1952 as well as vice chairman of the Volkskammer (Peoples Parliament), the East-German parliament. In 1952, as a Generalleutnant he was posted to the Innenministerium (Department of the Interior) and in 1953 he became deputy Chief of the Kasernierte Volkspolizei ("Peoples Police in Barracks") and Chief of Staff. In 1956, at the establishment of the Nationale Volks Armee NVA (National Peoples Army), he was transferred to the Nationales Verteidigungsministerium (Department of National Defence). In 1955 and 1956, through his relations with veterans in Bavaria he took up secret negotiations with the Western German Secretary of Finance at that time, Fritz Schäffer (CSU) and conducted talks on the possibilities of a German-German reunion. Because of this he was more and more restricted in Eastern-Germany and was forcibly retired in 1958. He died in 1961 after having fallen from his balcony. From earlier nervous breakdowns and health problems, it is assumed that he committed suicide.* 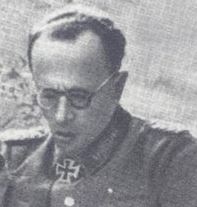