Citation:
"In Italy on the night of 18th/19th September, 1944, a Battalion of the 9th Gurkha Rifles was fighting its way forward into the State of San Marino against bitter opposition from German prepared positions dominating the river valley and held in considerable strength in depth.
Rifleman Sher Bahadur Thapa was a number one Bren gunner in a rifle Company, which just before dawn came under heavy enemy observed small arms and mortar fire.
He and his section commander charged an enemy post, killing the machine gunner and putting the rest of the post to flight. Almost immediately another party of Germans attacked the two men and the section commander was badly wounded by a grenade, but, without hesitation, this Rifleman, in spite of intense fire, rushed at the attackers and reaching the crest of the ridge brought his Bren gun into action against the main body of the enemy who were counterattacking our troops.
Disregarding suggestions that he should withdraw to the cover of a slit trench, Rifleman Sher Bahadur Thapa lay in the open under a hail of bullets, firing his Bren gun which he knew he could only bring to bear on the German emplacements from his exposed position on the crest of the hill as they would not have been visible from the slit trench.
By the intensity and accuracy of the fire which he could bring to bear only from the crest, this isolated Gurkha Bren gunner silenced several enemy machine guns and checked a number of Germans who were trying to infiltrate on to the ridge.
At the end of two hours both forward Companies had exhausted their ammunition and, as they Were by then practically surrounded, they were ordered to withdraw. Rifleman Sher Bahadur Thapa covered their withdrawal as they crossed the open ground to positions in the rear and himself remained alone at his post until his ammunition ran out. He then dashed forward under accurate small arms and mortar fire and rescued two wounded men, who were lying between him and the advancing Germans. While returning the second time he paid the price of his heroism and fell riddled by machine gun bullets fired at point black range.
The great bravery of this Gurkha soldier was instrumental in saving the lives of many of his companions and his outstanding devotion to duty contributed largely to the severe reverse which the enemy eventually suffered when our troops counter-attacked. His name will live in the history of his Regiment as a very gallant soldier." 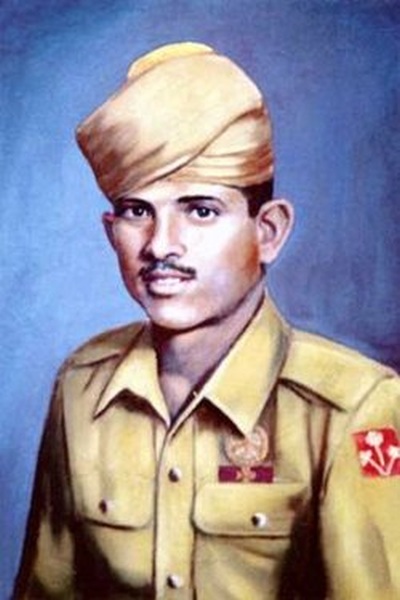 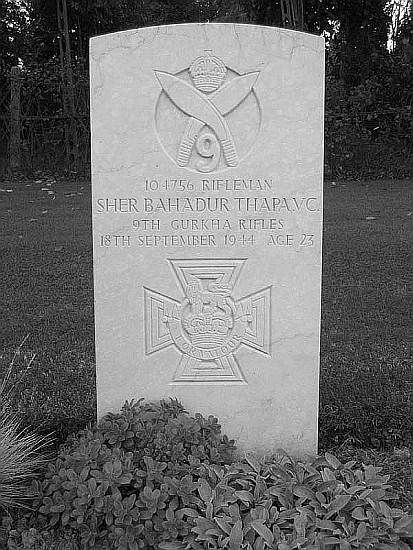