Citation (general):
"For daring, resource and devotion to duty in the second Battle of Narvik."

Citation:
"Captain Sherbrooke, in H.M.S Onslow, was the Senior Officer in command of the destroyers escorting an important convoy bound for North Russia. On the morning of 31st December, off the North Cape, he made contact with a greatly superior enemy force which was attempting to destroy the convoy. Captain Sherbrooke led his destroyers into attack and closed the Enemy. Four times the Enemy tried to attack the convoy, but was forced each time to withdraw behind a smoke screen to avoid the threat of torpedoes, and each time Captain Sherbrooke pursued him and drove him outside gun range of the convoy and towards our covering forces. These engagements lasted about two hours, but after the first forty minutes H.M.S. Onslow was hit, and Captain Sherbrooke was seriously wounded in the face and temporarily lost the use of one eye. Nevertheless he continued to direct the ships under his command until further hits on his own ship compelled him disengage, but not until he was satisfied that the next Senior Officer had assumed control. It was only then that he agreed to leave the bridge for medical attention, and until the convoy was out of danger he insisted on receiving all reports of the action.

His courage, his fortitude and his cool and prompt decisions inspired all around him. By his leadership and example the convoy was saved from damage and was brought safely to its destination."

Later promoted to the rank of Rear-Admiral.
Robert Sherbrook is buried at the St.Peter & St.Paul's Churchyard, Oxton, Great Britain.

Citation:
"In recognition of services connected with the liberation of Norway." 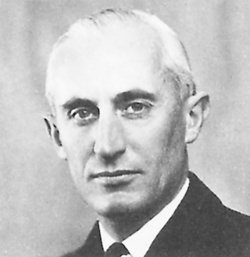