Citation:
"In Holland, on 1st March, 1945, during the attack on Kervenheim, Private Stokes was a member of the leading section of a Platoon.
During the advance the Platoon came under intense rifle and medium machine gun fire from a farm building and was pinned down. The Platoon Commander began to reorganise the Platoon when Private Stokes, without waiting for any orders, got up and, firing from the hip, dashed through the enemy fire and was seen to disappear inside the farm building. The enemy fire stopped and Private Stokes reappeared with twelve prisoners. During this operation he was wounded in the neck.
This action enabled the Platoon to continue the advance to the next objective, and Private Stokes was ordered back to the Regimental Aid Post. He refused to go and continued the advance with his Platoon.
On approaching the second objective the Platoon again came under heavy fire from a house on the left. Again, without waiting for orders, Private Stokes rushed the house by himself, firing from the hip. He was seen to drop his rifle and. fall to the ground wounded. However, a moment later he got to his feet again, picked up his rifle and continued to advance, despite the most intense fire which covered not only himself but the rest of the Platoon. He entered the house and all firing from it ceased. He subsequently rejoined his Platoon who, due to his gallantry, had been able to advance bringing five more prisoners.
At this stage the Company was forming up for its final assault on the objective, which was a group of buildings, forming an enemy strong point. Again, without waiting for orders, Private Stokes, although now severely wounded and suffering from loss of blood, dashed on the remaining 60 yards to the objective, firing from the hip as he struggled through intense fire. He finally fell 20 yards from the enemy position, firing his rifle until the last, and as the Company passed him in the final charge he raised his hand and shouted goodbye. Private Stokes was found to have been wounded eight times in the upper part of the body.
Private Stokes' one object throughout this action was to kill the enemy, at whatever personal risk. His magnificent courage, devotion to duty and splendid example, inspired all those round him and ensured the success of the attack at a critical moment; moreover, his self-sacrifice saved his Platoon and Company many serious casualties." 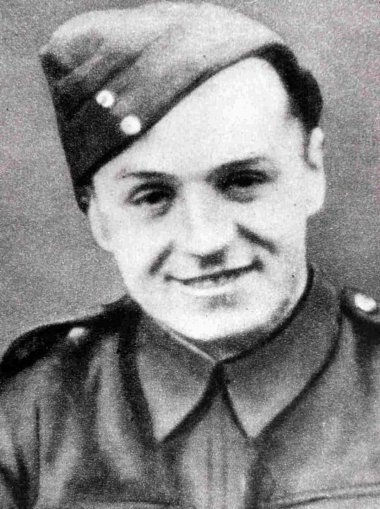