Citation:
"At Chateau Fontache, near Verson, on the night of 1/2 Aug. 1944 Lt. J. Alden took out a sapper patrol to destroy a Tiger tank O.P. situated within the enemy FDLs and about 800 yards from our own position. An attempt to reach te A.F.U. on the previous night had failed due to fire from the tank itself and from positions in the immediate vicinity.
No Man's Land was almost entirely devoid of cover and there was a full moon in clear sky. Proceeding to within 350 yards of their objective Lt. J. Alden and his party once again encountered heavy defensive automatic and mortar fire. The remaining ground to be covered, laden as they were with prepared demolition charges, was being actively engaged by Spandau firing on fixed lines. Despite the open nature of the ground and the full observation available to the enemy, Lt. Alden led his patrol with great coolness and skill showing a complete disregard for his own personal safety. As a direct result of his outstanding leadership and example the patrol successfully reached and destroyed the tank within 50 yards of a manned enemy position."

Awarded with Silver Star by Dicision No. 589 by General Charles de Gaulle. 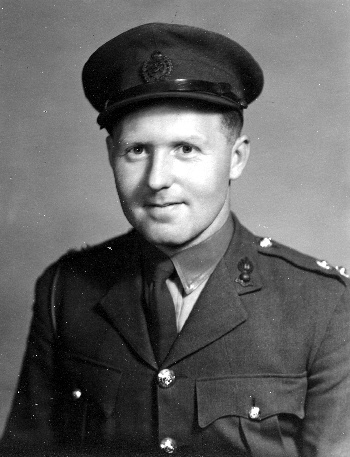