Georghe Manoliu was born on the 13th of March 1888 in the Romanian city of Piatra Neamt, in a distinguished family of dignitaries from the Ceahlau region. After he graduated the high school he attended the Infantry School for Officers, in the capital city. He had begun his military career as second lieutenant, in 1909. Participating in the Balkan War (lieutenant, 1913) he was already veteran during the World War I (major, 1917) commanding with bravery an infantry battalion. After the war he studied at the Superior School of War in Bucharest (1919-1921). Acquiring leading experience as staff officer, he gets than the command of the 12th Mountain Battalion (1923-1936). Appreciated for his skills and proficiency he was soon advanced to the rank of brigadier (1938).

At the beginning of the World War II he commanded the 4th Mixed Brigade. In June 1941 he had begun the offensive over the city of Cernauti, leading his troops even from the first line. He crossed the Nistru River on the 17th of July 1941 and the Nipru River on the 18th of September. His brigade fought vigorously at Malaya Belozherka and Vladimirovka (24-30 September, 1941). His unit was tasked to secure the northern Soviet coastline of the Azov Sea during mid-October. On the 9th of November, the soldiers of the 4th Mixed Brigade received the order to go finally home, but when the column reached Berislav, near Nipru, after 10 days of foot march the unit was stopped and sent back to the battlefields, in Crimea.

On the 15th of March 1942 his brigade was transformed in the 4th Mountain Division and the brigadier Manoliu was advanced to the rank of major-general. The most significant campaign of the new instituted unit was the siege of Sevastopol. His division played a key role on the battlefields at Wald Kreuze and Kegel; the general Manoliu, by his own strategy, helped the German 54th Corps to break through the powerful enemy's defense. He was awarded for his bravery with the Knight's Cross of the Iron Cross.

In September 1942, the 4th Mountain Division had another difficult assignment: to secure and defend the coastline of the Black Sea, initial between Feodosia and Akmecet and later between Feodosia and Kerci. Until the spring of 1943 he managed to push back all the Soviet attempts to disembark from landing crafts for amphibious assaults.

On the 2nd of March 1943, the general Manoliu was requested to command the 4th Regional Corps and he returned to Romania. After the insurrection of the 23rd of August 1944, the general Manoliu was in charge of the defense operation against the German troops in retreat. Being almost 40 years in the service of his nation he was retired on the 27th of March 1945. He died on the 28th of August 1980, in Bucharest, at 92 years old. 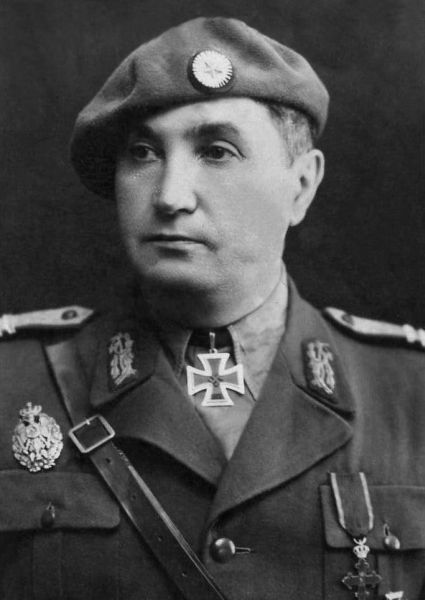