In May, 1941, Norman Williams enlisted in the RAAF and was posted to the UK in March, 1942. He served with No. 10 Squadron and No. 35 Squadron as a tail gunner in Halifax bombers.
In 1944, he returned to Australia and joined No. 23 Squadron, flying B-24 Liberators against Japanese forces until the war ended.
In 1947, Flight Lieutenant Williams posted to 81WG HQ in Japan and was promoted to acting Squadron Leader. He demobilised in May, 1948.
In 1952, Williams re-enlisted and served in Singapore, Japan and Korea. He resigned on September 23, 1954, and purchased a rice farm.

Citation:
"One night in September, 1942, this airman was the rear gunner of an aircraft which attacked Bremen. On the homeward flight, the aircraft was intercepted by a Junkers 88 whose pilot manoeuvred to attack from the rear. By his skilful evading directions, Sergeant Williams enabled his captain to keep the attacker at bay and, when the opportunity .occurred, delivered a devastating burst which caused the enemy aircraft to burst into flames and dive steeply towards the ground. Throughout the engagement, this airman displayed exceptional skill and resource, setting an example which inspired his colleagues."

Citation:
Since being awarded the D.F.M., Sgt. Williams has completed numerous sorties, during which he has attacked targets at Turin, Genoa, Cologne, Hamburg, Essen and Berlin."

Citation:
"One night in June, 1943, this airman was the rear gunner of an aircraft detailed to attack Dusseldorf.
During the operation, the bomber was intercepted by 2 enemy fighters. In the first encounter, Flight Sergeant Williams' turret was rendered unserviceable, while he sustained several bullet wounds in the legs and body. Nevertheless, when the second fighter attacked, Flight Sergeant Williams skilfully gave his captain directions which enabled the fighter to be evaded. Flight Sergeant Williams then delivered an accurate burst of fire which caused the enemy aircraft to explode in the air.
The first fighter resumed the attack but, although in considerable pain, with both legs partially paralysed, Flight Sergeant Williams with a well placed burst of fire from close range, shot the enemy aircraft down. Making light of his injuries he remained in his damaged turret until a landing was effected when his turret had to be cut away before he could be extricated. By his great skill, courage and determination, this airman contributed in a large measure to the safe return of the bomber and its crew." 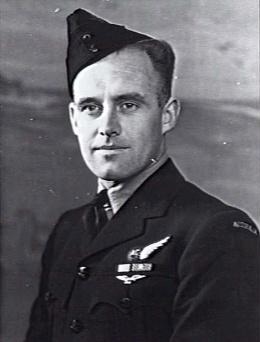