Italo Balbo served with the Italian Alpine Corps from 1914 until 1915. During the years 1915 until 1926 he was decorated three times for his flying skills. In 1920 he was appointed to Secretary for the Italian Fascist Party in Ferrara.
He led the 4000 troops in the Battle of Ravenna on March 24th and 25th 1921. He took part in the Fascist "March on Rome" in 1922. After this he led the military operations in Northern Italy. In April 1922 he forced the Italian Government toe release Fascist held in Bologna. On May 12th Balbo organised a general strike of 63000 fascists in Ferrara, forcing the local government to resign. On the 29th of that same month he led 20000 member of the armed Fascist Militia in occupying Bologna. Bloodshed was prevented after intervention of Mussolini. After several military actions he ceased hostilities on July 30th 1922 and ordered his troops back to Ravenna. When he received a call for help he started actions again in August. A major clash erupted between Balbos troops and the Socialist Arditi. After interventions of Mussolini, he was ordered back again. From then he was more under command of Mussolini himself.

In 1923 Balbo was promoted to General of the Militia, but he resigned after loosing a law sued against the "Voce Republicana" who accused him of murdering a priest in Ferrara. For some time he worked as a reporter for the "Il Corriere". In 1926 he was appointed Under-Secretary of State for Aviation and in 1929 followed his appointment as Under-Secretary responsible for Economy. In 1930 Balbo was appointed Minister of Defence.

When on June 30th 1933, specially trained pilots, demonstrated a mass formation flight with 25 Savoia-Marchetti SM.55X flying boats, this resulted in stating such large groups in a formation as "Balbos". Balbo flew with this total formation from Rome to Chicago to demonstrate the possibilities and the skills of the Italian Airmen.
In honour of his journey to the Century of Progress Exposition, Chicago renamed 7th Street as Balbo Drive. Afterwards he and his crews were treated to a ticker-tape parade in New York and lunch with President Roosevelt.

During the Spanish Civil War he directed air attacks against Republican shipping in the Mediterranean. In December 1939 he was appointed Governor of Libya by Mussolini, who wanted to get him out of the way. He transformed the colony from the dark ages to a model Italian province. In May 1940 he remarked publicly on Italy's inability to strike in Libya because of its lack of arms and equipment.
On June 2nd 1940 he met Ciano to discuss Italy's position regarding the continuation of the conflict in Libya.
On June 28th he was ordered to invade Egypt, but was killed when his plane was shot down by
Italian anti-aircraft fire over Tobruk. Some authors suggest that Ciano was behind the act, but documentary proof is never found.

"As a commander of a platoon of Arditi he was in charge of carrying out a successful special night reconnaissance in an extremely insidious period and terrain. He always showed great personal courage and brilliant qualities as a soldier and commander. To fulfil his mandate, he often engaged against a superior enemy in strength, attacking it with such impetus that it was then necessary to use our machine guns and even our artillery to disengage this enemy. Especially commendable was the action he carried out on the night of August 14, also reported in the war No. 15 bulletin of the supreme command."
- Dosso Casina July-August 1918

«This young man, driven by pure ideals, continuously shows his great contempt for danger and high enthusiasm. As a commander of a department of Arditi, he set a fine example of devotion to duty to his battalion in the attack on an enemy position strenuously defended by numerous machine guns, managing to set foot in the enemy trench first. Beaten by the deadly fire of the enemy, during the admirable momentum of the successive waves, he remained alone between the dead and the wounded and, pretending to be mortally wounded, was able to reach our positions under the cover of darkness."
- Monte Valderoa 27 October 1918

"He always showed the greatest contempt for danger in carrying out the numerous and difficult tasks as commander of an assault platoon. He faced the opponent with impetuous courage in the attack on a strong enemy rearguard, broke its resistance and captured 40 enemies, 2 machine guns and a trench cannon."
- Monte Valderoa-Rasai (Val di Seren) 27-31 October 1918

"An act authorizing the President to present Distinguished Flying Crosses to Air Marshal Italo Balbo and General Aldo Pellegrini, of the Royal Italian Air Force in recognition of their formation flight with twenty-four seaplanes to the United States and back to Italy, which was an event of National importance, a great aeronautical achievement, and a mark of the good will between Italy and the United States."
--
From July 1 - August 12, 1933 he led a flight of 24 flying boats on a round-trip flight from Rome to the Century of Progress in Chicago, Illinois.

"Marshal of the Air, 'Quadrunviro' and faithful soldier of the Duce of the first hour, in combat and victory, unsurpassed 'transvolatore' of continents and oceans, colonizer of masses and ruler of imperial lands with military force, laws and Roman grandeur.

While preparing to hurl the valiant troops and the mighty flocks across the border, he concluded his heroic life with the supreme sacrifice in the Tobruk airspace.

His deeds are eternalized in the memory of the people and with glories of the race."
- Tobruk airspace, June 28, 1940 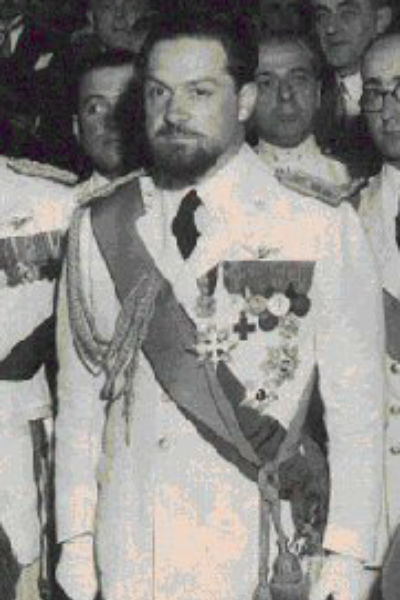