Citation:
"For extraordinary heroism in connection with military operations against an armed enemy while serving with Company B, 1st Battalion, 504th Parachute Infantry Regiment, 82d Airborne Division, in action against enemy forces on 17 September 1944 near Heumen, Holland. As an acting rifle squad leader, Sergeant Dustin courageously led his 8-man squad in an assault on a strongly fortified control island, which seriously menaced the security of a vital highway bridge, which had just been captured by other elements of his company. Unmindful of all personal dangers and cognizant of the necessity for clearing the island of all enemy, Sergeant Dustin led his squad through intense small arms fire to within 25 yards of the enemy's forward position. At this point the enemy, numbering approximately 45, retreated to a house and air raid shelter in the center of the island. Vigorously pressing the assault, Sergeant Dustin, spearheading his squad's attack, moved to within 10 yards of the house into which he threw a Gammon grenade killing 3 of the enemy that had taken refuge there. Almost immediately a shot was fired at him from the air raid shelter. Sergeant Dustin whirled and threw a Gammon grenade into the air raid shelter killing 3 more Germans. Following up the explosion, he rushed into the entrance of the shelter forcing the remaining 39 enemies to surrender. By his exemplary bravery and superior leadership, Sergeant Dustin accounted for 45 of the enemy and insured the security of the vital bridge objective. His indomitable courage and aggressive leadership set an inspiring example for his men, thereby reflecting the highest traditions of the military service."

For action performed on 17 September 1944, near Heumen/Gelderland, the Netherlands.
General Orders No. 8, Headquarters, XVIII Airborne Corp (November 14, 1944).
At the time of the action he still held the rank of Private First Class. 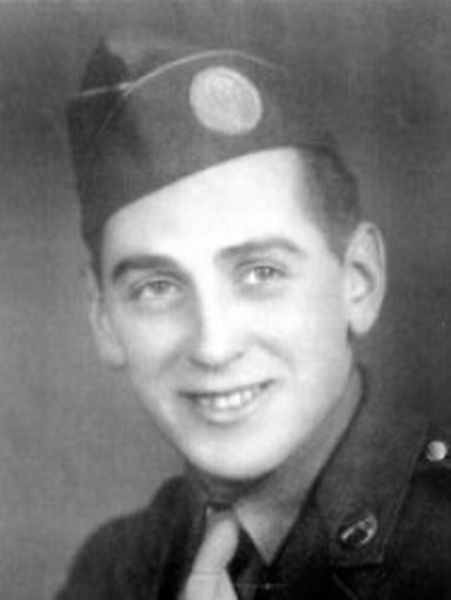