James 'Ginger' Lacey was born in Wetherby, Yorkshire, England, on 1st February, 1917. After being educated at King James Grammar School in Knaresborough, he worked as a dispenser before joining the RAF Volunteer Reserve in 1937. He also worked as a flying instructor with the Yorkshire Aeroplane Club.
On the outbreak of the Second World War Lacey joined the Royal Air Force and he served in France until Dunkirk in June 1940.
During the Battle of Britain Lacey, flying his Hawker Hurricane, became the RAF's leading flying ace with 18 victories. This included shooting down a Heinkel He111 that bombed Buckingham Palace on 13th September, 1940.
In November 1942 he was appointed chief instructor of the Special Attack Instructors' School.
In March 1943, Lacey was posted to India before returning to Europe in November 1944. Soon afterwards he took command of 17 Squadron where he scored his final victory. This took his total to 28 destroyed and 9 damaged.
After the Second World War, Lacey remained in the Royal Air Force where he reached the rank of Squadron Leader. After retiring from the RAF in March 1967, Lacey ran an air freight business.
Ginger Lacey died on 30th May 1989.

Citation:
"Sergeant Lacey has taken part in numerous patrols against the enemy. He has displayed great determination and coolness in combat, and has destroyed six enemy aircraft."

Citation:
"Sergeant Lacey has shown consistent efficiency and great courage. He has led his section on many occasions and his splendid qualities as a fighter pilot have enabled him to destroy at least 19 enemy aircraft."

Second DFM awarded as a bar for on the ribbon of the first DFM. 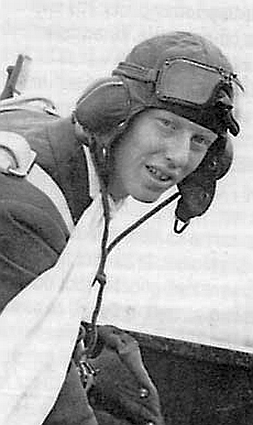