In 1940, Ab Homburg served with the Vrijwillige Landstorm Motordienst ("Voluntary Motorservice") as a Cadet. Soon after the capitulation of the Netherlands, he went into hiding and commenced gathering military information.
On March 22nd, 1941, he escaped occupied Holland by sailing by boat from Ijmuiden to England, accompanied by Willem de Waard and Cor Sporre. September 6th the British dropped him over Noord-Brabant as a secret agent but within a few weeks he was arrested by the Sicherheitsdienst (German Security Police) after having visited a dentist friend who turned out to be a member of the NSB (Dutch Nazi Movement). He was sentenced to death without a trial. On the day of his execution he escaped from the Oranje Hotel (a prison) in Scheveningen. Continually on the run, he, together with Jan Buizer and Jan de Haas, managed to hide in the hold of the steam trawler Beatrice; 40 hours after departure from Ijmuiden, they managed to capture the vessel along with its crew.
On April 1st, 1945, Homburg, now Flying Officier in 322 "Dutch" Squadron was shot down over Borne in Overijssel and lost his life. He was buried in Delden under the name of Harvey. Later on, his remains were laid to rest at Duinhof Cemetery in IJmuiden. In IJmuiden a street was named after him.

Recommendation:
"For having performed particularly courageous and tactful deeds as fighter pilot with 322 Dutch Squadron in action against the enemy, having displayed great devotion to duty and praiseworthy personal courage and coolness and complete disregard for his personal safety whilst performing the tasks alloted to him, such as destroying motorised transports and railway engines, usually in the face of heavy and accurate hostile anti-aircraft fire, skillfully and succesfully pressing home bombing attacks against bridges, buildings and railway tracks until April 1st, 1945 when he lost his life after having been shot down over Delden (Overijssel) by hostile anti-aircraft fire whilst voluntarily performing an armed reconnaissance mission under highly adverse conditions of weather, flying at extremely low altitude." 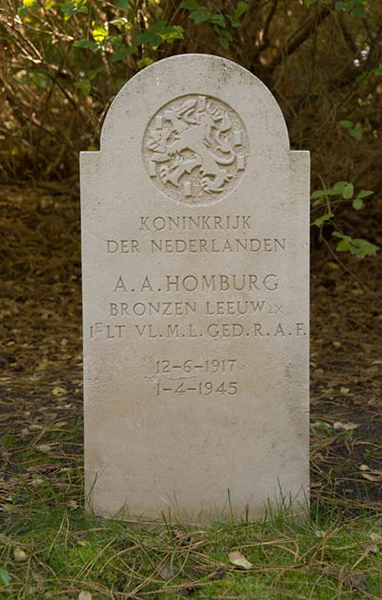