Fritz Jäger (also spelled as Jaeger) was born September 25th, 1895 in Kirchberg a/d Jagst, the son of Chief Physician Franz Jäger and Sophie Katharina Jäger, born Freiin Schirndinger von Schirnding. Around 1906 the family moved to Stuttgart and Fritz went to the Eberhard Ludwig Gymnasium.
In 1914 Fritz Jäger entered military service voluntarily and ended up as Fahnenjunker in Infanteri-Regiment 119. With his unit he participated in the battles on the Western Front and was decorated various times. February 23rd,1918 he married Marie-Elisabeth Paula von Reclam. At the end of the First World War, Jäger had risen to Oberleutnant. On July 6th, 1919, a son was born, Kraft Werner Wilhelm Jäger.
After World War One he continued his education and studied agricultural science at the Landwirtschaftlichen Hochschule in Tetnang. At the same time in 1919, he joined the German Workers Party (DAP) which converted itself to the National Socialist German Workers Party (NSDAP) in 1920. In 1919 he took employment with the industrialist Robert Bosch in Bernried and became a leading figure in the Münchener Freikorps Oberland. In 1920 he refused to take part in the plan to seize power of Walter von Lüttwitz and Wolfgang Kapp and left the NSDAP. From then on he turned into an active opponent of National Socialism.
In 1921 in Berlin he founded the loan company Prokredita, an enterprise that went bankrupt during the crisis. Between 1930 and 1933 he acted as Adjutant to Major der Reserve Franz von Stephani, at the time Berliner Landesführer der Stahlhelm (National Leader of the Union of Frontsoldiers). On September 24th, at his own request, Jäger was taken back in military service and became Hauptmann of Infanterie-Regiment 29 on November 1st. In 1935 he was transferred to the Stab Infanterie-Regiment 8. In 1938, by that time promoted to Major, he took part in the annexation of the Sudetenland as Battalionskommandeur.
At the outbreak of World War Two, in September 1939, Jäger was engaged in the battle for Poland. During this period, he kept in close touch with people like Carl-Hans Graf von Hardenberg, Hans Oster, Friedrich Olbricht and Ludwig Beck of the Amt Ausland/Abwehr (Foreign Intelligence). In May and June 1940 he and his unit took part in the campaign in the West. From 1941 onwards he took part in the battles at the Eastern Front in the rank of Oberstleutnant and Battalionskommandeur.
February 17th, 1942 his wife passed away. Subsequently he informed his son, Leutnant in the Wachbatallion Berlin "Gross Deutschland" about his contacts with the military resistance against Hitlers reign. His son consented, in the event of an overthrow, to take command of the Wachbatallion and to support the revolution.
Later in 1942, Jäger was engaged in the battle for Stalingrad where he was injured. He was flown out as one of the last military personell`and was admitted to the Lazarett in Lublin. During negotiations in 1943, Fritz Jäger consented to the plan to make an attempt on Hitler.
His son however was arrested on charges that later on could not be proved and was brought to a military court. Despite his being exonerated for lack of evidence, he was sent to a position at the front and so could not support his father in case of an uprising.
At the time of the attempt on Hitler on July 20th, 1944, Fritz Jäger was serving as Kommandeur der Panzertruppen (CO Armored Troops) in Wehrkreis II (Stettin) and XXI (Kalisch). After the attempt, he was ordered by Claus Graf von Stauffenberg to arrest and place in custody an SS general as well as Goebbels and his ministry and to occupy the transmitter in the Masurenallee. Due to the failure of the attempt, not enough troops were allocated to him. In an ultimate attempt to reach General der Infanterie and Befehlshaber Wehrkreis Berlin (General of Infantry and CO sector Berlin) Joachim von Korzfleisch, he was arrested by the Gestapo and placed in custody. His son was also arrested for his alleged role in the uprising.
August 14th, 1944 he was dishonorably discharged from the Wehrmacht following a verdict by the Ehrenhof. August 21st he appeared before the Volksgerichtshof (Peoples Court) presided over by Roland Freisler and was sentenced to death for high treason. He was hanged the same day in Berlin-Plötzensee. On February 20th, 1945, his son was sent to concentration camp Sachsenhausen which he survived.

Major Fritz Jäger and his Bataillon forced the crossing over the Maas river in the face of a numerically superior and well dug-in enemy. By doing so he opened up the advance route for two Divisionen. The success of this difficult task was made possible only by Jägers ruthless devotion to duty and outstanding combat leadership.

The opposed river crossing referred to in the article took place at Nouzonville on the 15.05.1940. 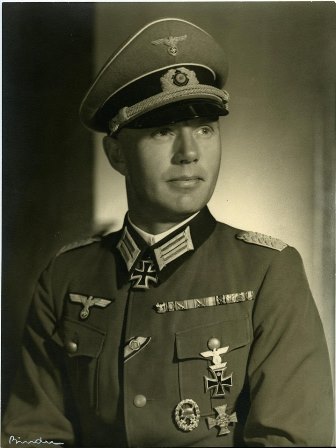 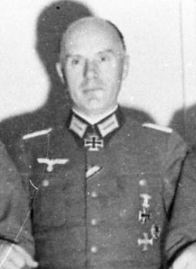