Citation:
"In Burma, on 2nd March, 1945, Naik Fazal Din was commanding a section during a Company attack on a Japanese bunkered position. During this attack, the section found itself in an area flanked by three bunkers on one side and a house and one bunker on the other side. This was the key of the enemy position and had held up a Company attack made earlier. Naik Fazal Din's section was accompanied by a tank but, at the time of entering the area, it had gone on ahead. On reaching the area, the section was held up by Light Machine Gun fire and grenades from the bunkers. Unhesitatingly Naik Fazal Din personally attacked the nearest bunker with grenades and silenced it. He then led his section under heavy fire against the other bunkers. Suddenly six Japanese, led by two officers wielding swords, rushed from the house. The Bren gunner shot one officer and a Japanese other rank but by then had expended the magazine of the gun. He was almost simultaneously attacked by the second Japanese officer who killed him with his sword. Naik Fazal Din went to the Bren gunner's assistance immediately but, in doing so, was run through the chest by the officer, the sword point appearing through his back. On the Japanese officer withdrawing his sword, Naik Fazal Din, despite his terrible wound, tore the sword from the officer and killed him with it. He then attacked a Japanese other rank and also killed him. He then went to the assistance of a sepoy of his section who was struggling with another Japanese and killed the latter with the sword. Then, waving the sword, he continued to encourage his men. He staggered to Platoon Headquarters, about 25 yards away, to make a report and collapsed. He died soon after reaching the Regimental Aid Post.
Naik Fazal Din's action was seen by almost the whole Platoon who, undoubtedly inspired by his gallantry and taking advantage of the bewilderment created amongst the enemy by the loss of its leaders, continued the attack and annihilated the garrison which numbered 55.
Such supreme devotion to duty, even when fatally wounded, presence of mind and outstanding courage, have seldom been equalled and reflect the unquenchable spirit of a singularly brave and gallant N.C.O."
Fazal Din, no known grave, name on the Rangoon Memorial, Birma. 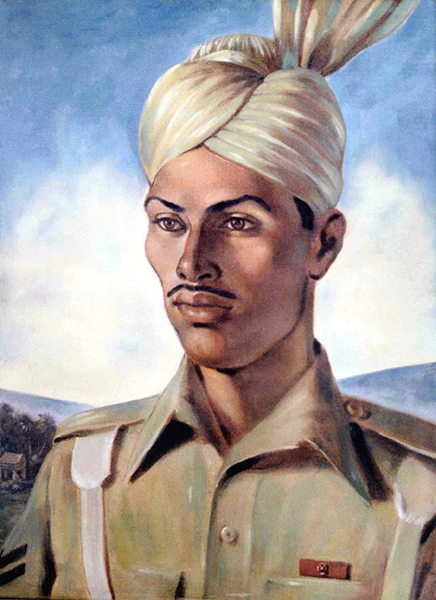